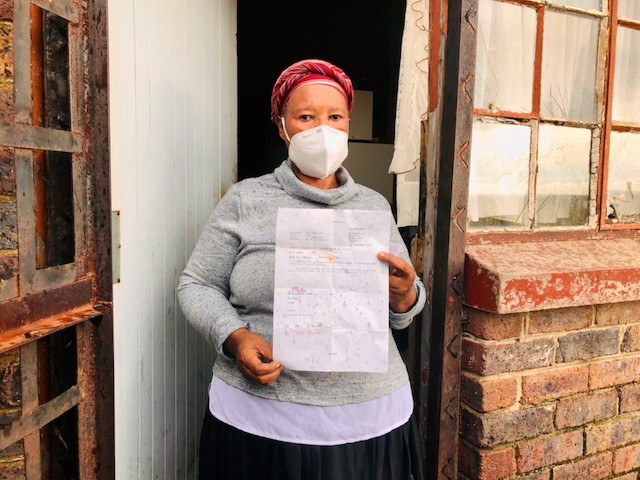 Veronica Ntuli, who has lived in Marievale since 1992, keeps the original army permit giving her permission to stay in her house next to the informal settlement. Photo: Kimberly Mutandiro

Residents of Happiness Village are dismissing recent claims that the South African National Defence Force (SANDF) has successfully relocated the residents it unlawfully evicted from the Marievale base in 2017.

Residents say less than half of them were relocated to Zamani informal settlement in Duduza. Those who remain in Happiness village say they continue to suffer harassment at the hands of the military.

In July 2020, GroundUp reported that the army had cut Happiness Village off from the world and placed a community leader under house arrest.

Lawyers for Human Rights (LHR) successfully applied for a court order at the end of July following which the army reopened the area in August. However, residents say harassment from soldiers continues unabated.

Veronica Ntuli, who has lived in Marievale since 1992, keeps the original army permit giving her permission to stay in her house next to the informal settlement. She used to operate a shebeen catering to soldiers and nearby Marievale mine workers.

“This is my home. Where do the soldiers want me to go?” she said. “The soldiers harass and threaten me, saying I must leave or else. Last week on Friday they came making noises at night and they cut off my electricity.”

“I am terrified to go out at night. Who knows what they can do to a poor widow like myself,” she said. “Soldiers are the ones who should leave the area and leave us in peace.”

Resident Ziyanda Nwazi said, “We cannot go anywhere without having soldiers ask us where we are going. They continue to patrol our area in tracksuits even after the court ordered them not to come near Happiness Village. Our kids are traumatised. When will this end?”

Community leader Chris Koitsioe said the army and the Mayco Member for Human Settlements are yet to deliver an acceptable relocation plan to provide alternative adequate accommodation.

“Claims that the army relocated us are mere propaganda,” he said.

Some of the evicted residents who went to live in nearby townships say they can no longer afford to pay rent. They want to return to Happiness Village.

“I lost my job at a restaurant where l was working in Sharon Park due to the pandemic. Paying rent is now a nightmare. The soldiers will not allow us to come back and they have not yet provided us with alternative accommodation,” says Ncansile Mthembu, who is renting a place at John Dube in Duduza.

She has also been struggling with school transport for her children who attend a school in Arla Park near to her old home in Happiness Village.

Some residents relocated to Zamani say the living conditions are far worse than in Happiness Village. Funeka Gumede said her home floods when it rains. She has no electricity and shares one chemical toilet with four other families. She also has to share a tap.

“We were of the impression that the army would allocate us our own place as old Marievale residents and not mix us with other people,” said Gumede.

Mayco Member for Human Settlements Lesiba Mpya said Zamani is only temporary and homes would be provided in John Dube housing project. He said over 120 residents had signed consent forms for relocation.

“No one was harassed into moving. We spoke to the SANDF and arranged to move them at their own consent … We have provided them with chemical toilets which are serviced and they have been reblocked for electricity,” said Mpya.

He said the people remaining in Marievale were doing so at their own risk.

“It does not make sense that some people want to be permanent at a military base. Explosives are tested there and it is a restricted area which civilians should be kept away from. Such a situation cannot be normalised. The people remaining there are doing so at their own risk. I have had meetings with them and they refused the relocation plan l offered them,” he said.

“It is not true that the army is terrorising people,” said Brigadier General M.P.M Mgobozi.

Next:  Essential worker fired for not working during level 5 lockdown reinstated