Vhembe District Municipality mum on why boreholes have not been fixed 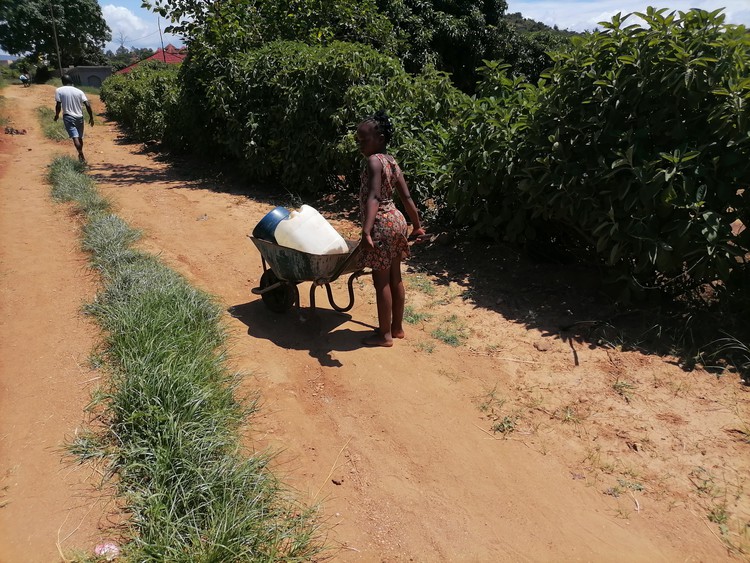 Villagers from Makhongelo in Elim, Limpopo carry buckets in wheelbarrows to collect water at a nearby dam because boreholes in the area have been dry for more than a year. Photo: Bernard Chiguvare

Villagers in Elim, Limpopo have been without water since boreholes in the area ran dry more than a year ago.

This week about a hundred protesters blocked roads near the mall to demand that the Vhembe District Municipality, which is responsible for water supply, fix their boreholes and truck in water to communities.

Johanna Simango from Makhongelo village told GroundUp that her family of six survive on their grandmother’s old age grant to buy groceries and water.

Simango’s home is just a few metres from one of the dysfunctional boreholes in the village. She walks at least 2km daily to buy water for R2 per 25 litre container. “We really ask the municipality to fix the boreholes as a matter of urgency,” she said.

According to Kelly Matjeke of Youth Against Crime, several boreholes across Elim are currently not working. He said the water supply has been intermittent since 2013 but the municipality would often come to fix the problem.

Matjeke said that some families who can’t afford to buy water have resorted to collecting and drinking water from a nearby dam.

Some community leaders on Monday met municipal officials where they apparently promised to truck in water to villages. This had not happened by Wednesday morning.

The officials from Vhembe District Municipality who attended the meeting referred our questions to spokesperson Matodzi Ralushai. The municipality and Ralushai have yet to respond to our questions about why the villages have been left without access to water for more than a year.

Elim is south-east of Louis Trichardt in Limpopo.

Next:  Elderly at risk as Eastern Cape Department of Social Development slashes funding