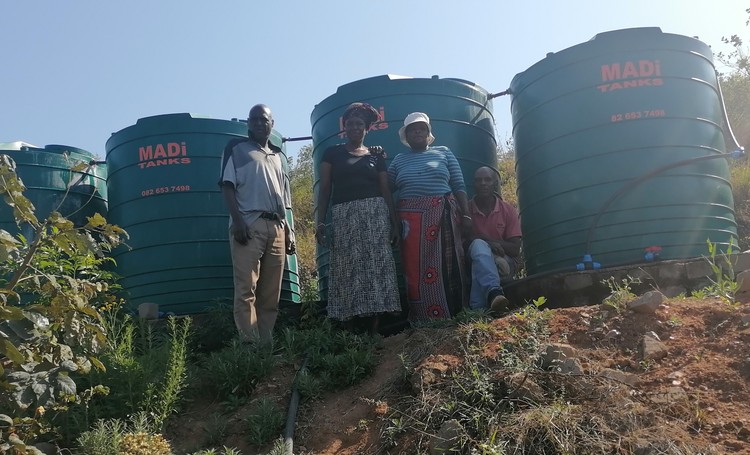 Riveny Mukhari, Grace Baloyi, Sellinah Shibzinga and Moses Nkanyane at one of the sites where water tanks have been installed by the villagers. Photo: Bernard Chiguvare

Fed-up with the failure of the authorities to provide them with water, about 300 families in Mbokota village in Limpopo pooled their money and raised nearly R200,000 to drill three boreholes. But there is still not enough water for everyone.

A third of the roughly 900 households in the village in Makhado local municipality raised money in 2020 to drill two boreholes.

Community leader Riveny Mukhari said the 300 households had not received water from the municipality’s boreholes, drilled in 2006, since 2008. Bright Mbokota Pre-School, with about 90 children, was within the area that did not receive water.

After complaining several times to the ward councillor, the households decided to take their own action.

In March 2021 the water started flowing into the tanks.

“The water is still not enough for the households everyday. We need to drill one more borehole and buy more Jojo tanks but most of the residents struggle to contribute,” said Mukhari.

Matodzi Ralushai, spokesperson for the Vhembe District Municipality which is responsible for water supply, said five boreholes were drilled in Mbokota village by the municipality in 2006. One had dried up and another was not working, he said.

On 23 September, he told GroundUp that the municipality would attend to the broken borehole during the week of 26 September when the trucks were available. But by Monday 3 October, the municipal trucks had not been seen in the village and the borehole was still not working.

Next:  Fourth Zimbabwean dies after attacks in Elim last month