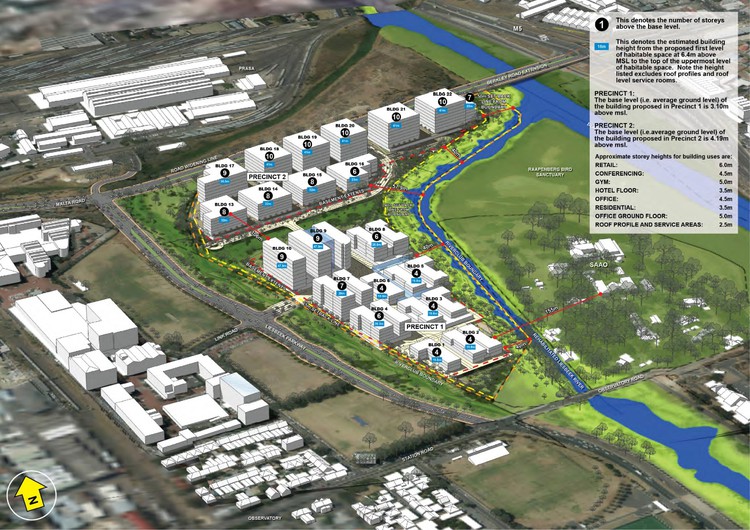 This is the planned development at the River Club that is being contested by various parties. Image supplied

In the latest battle over the planned mega-development at Observatory’s River Club, the Heritage Western Cape Appeal Tribunal is being taken to court by the Western Cape Department of Transport and Public Works.

Public Works wants parts of a ruling by the Heritage Appeals Tribunal overturned. That ruling criticised the three government departments: the provincial Environment Department, Public Works, and the City of Cape Town for “political posturing”, spending time on “fruitless and wasteful contestations”, and “encouraging dissent” among their “subordinates or opponents” instead of putting their effort towards obtaining a “better understanding of all the heritage issues in the area that are at stake”. This, the Tribunal stated, was contrary to the three government departments’ constitutional obligation towards cooperative governance.

In papers filed with the Cape High Court on 12 October, the head of Public Works, Jacqueline Gooch, states that if the Tribunal’s ruling is allowed to stand it would “in all probability negatively impact” on findings that still need to be made by the Public Works and Environment departments, as well as the City, in relation to the River Club development.

The 14.8ha land has been the site of a four-year battle between numerous civic bodies opposing a proposed R4.5 billion development by the property owner, Liesbeek Leisure Properties Trust. Departments in the Western Cape Government, and the City of Cape Town want the development to proceed.

Opposition is mainly focused on two issues. Firstly, the property has heritage significance because it is the site where the Dutch originally forced the Khoi off their traditional grazing lands. Secondly, it is argued that the development is contrary to current city planning related to the Two Rivers Urban Park within which the River Club is situated.

How the tribunal came to rule against the City and Province

The heritage significance of the land, voiced by several Khoi traditional leadership structures, led Heritage Western Cape (HWC) to place the site under provisional heritage protection after a Notice of Intent to Develop was filed in 2016. This provisional protection order took effect for a maximum of two years, starting on 20 April 2018, to prevent any changes to the site while heritage significance was being determined. (It has since expired.)

Appeals were lodged against the provisional protection order by the Public Works and Environment departments and the City.

These appeals were heard by the Heritage Appeals Tribunal appointed by the MEC for Cultural Affairs and Sport, which is the provincial department that funds Heritage Western Cape (HWC), although HWC is the provincial arm of the South African Heritage Resources Agency.

After a process that lasted almost as long as the provisional protection itself, the Tribunal rejected the appeal in a ruling that was highly critical of the conduct of the provincial departments and the City.

It is largely this criticism delivered on 14 April this year – five days before the provisional protection lapsed – that Gooch wants the court to strike off the record.

In the court papers, Gooch states the Tribunal got its facts wrong and its statements were not “justified by the evidence which served before” them.

The Tribunal’s 14 April ruling said that after the three government parties appeal was rejected initially by HWC’s appeals committee, they chose to join the developer in their appeal to the Tribunal.

Gooch, in the court papers, takes exception to this part of the ruling which finds that the City and the provincial departments acted in concert with the developer.

Gooch argues that all the parties independently came to the decision to lodge their own appeals against HWC’s provisional protection of the River Club.

The Tribunal stated: “Notable and alarming at the same time, is the concern that government officials who are meant to serve the people of this country and should be loyal and respectful towards each other, are perceived to form alliances with other tiers of government and developers, instead of aligning the scarce resources, with experience skills and expertise to cooperatively solve complicated heritage issues, internally, and in good faith.”

In its court papers Public Works contests this allegation that the provincial departments and the City had a pre-arranged agreement to go ahead with the development, and joined with the developer in their appeal against the provisional protection order.

This has “grave implications for both the reputation and integrity of decision-makers who still have to make decisions on the proposed redevelopment of this property,” states Gooch in the court papers. She further argues the Tribunal’s statements are “sweeping” and “highly prejudicial” to Public Works.

The Tribunal impugned “or at the very least cast serious doubt on the integrity of the officials of the provincial departments and the City”, argues Gooch.

No relief is sought from any of the respondents.

Province and City support the development

In the period between the Tribunal’s ruling of 14 April and Public Works’s Notice of Motion on 12 October, the environment department and the City’s Municipal Planning Tribunal, have shown support for the River Club development.

Despite the ongoing appeal process against the Environmental Authorisation that is required for a rezoning application to be heard, the City’s Municipal Planning Tribunal on 18 September unanimously granted the developer’s rezoning application, changing the land from open space to general business, with buildings up to 11-storeys high and the infilling of a floodplain.

The rezoning decision by the Municipal Planning Tribunal is under appeal following submissions by the Observatory Civic Association, the Goringhaicona Khoi Khoi Indigenous and Traditional Council, and the Two Rivers Urban Park Association.

HWC CEO Mxolisi Dlamuka said that HWC was seeking legal guidance on whether to oppose the motion or comply.

Dlamuka said if they opposed it, they wanted to do so on the basis of legal facts and not simply for the sake of it.

Next:  How the Western Cape responded to Covid-19

Previous:  Slain mining activist to be buried on Friday