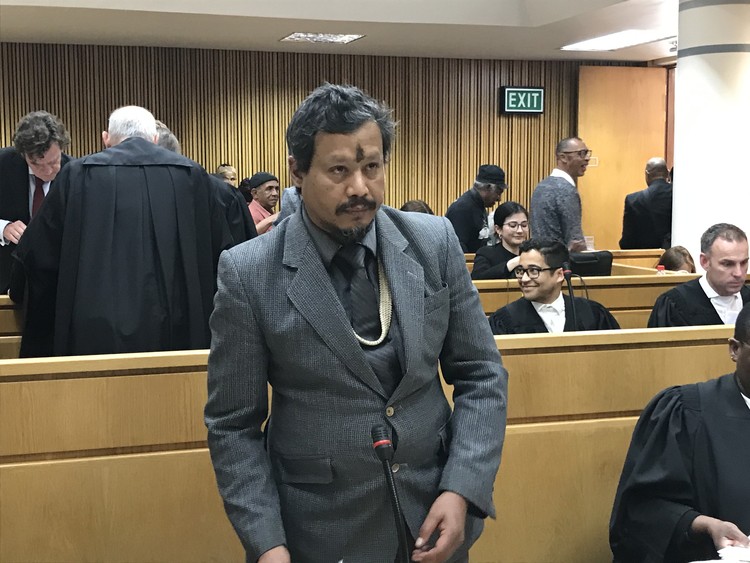 The battle against the River Club development may well be over after Tuesday’s scathing court finding that activist Tauriq Jenkins (photographed) made fraudulent representations to the court. Archive photo: Steve Kretzmann

A high court interdict granted in the Western Cape High Court earlier this year that stopped development of the R4.6-billion River Club development, has been rescinded. This was because it was obtained “through fraud”.

Judges Elizabeth Baartman, Hayley Slingers and James Lekhuleni ruled on Tuesday that Tauriq Jenkins, who purported to act on behalf of the indigenous Goringhaicona Khoi Khoin Indigenous Traditional Council (GKKITC) in the interdict application which was decided by Deputy Judge President Patricia Goliath, “was determined to stop the development at all costs”.

It emerged in a rescission application brought by other members of the GKKITC, which was heard by the full bench, that he had “fabricated a constitution to suit his objective, and had betrayed the trust of others in him”, the three judges ruled.

In March Judge Goliath granted the interim interdict to stop any further development of a “large-scale urban campus”, including the regional headquarters for Amazon, on the site where the Liesbeek and the Black Rivers join.

Judge Goliath ordered that the interdict remain in place until there was “meaningful consultation” with all Khoi and San First Nations People and pending a review of the relevant environmental land use authorisations for the development on the historically and culturally significant floodplain.

But the GKKITC cried foul and applied for a rescission of the judgment claiming Jenkins had no authority to act in its name, nor on behalf of other First Nations groups.

Judge Baartman, who penned Tuesday’s ruling said, the GKKITC, Regent Michael Hansen, Chief Shiraatz Mohammed and Peter Ludolph (the applicants) had instituted the rescission application against Jenkins, Delroque Arendse and the Observatory Civic Association (the respondents) on the basis that the interdict had been obtained by fraud.

The judge said the GKKITC was a group of individuals who shared the same heritage and desired its protection.

Jenkins had professed to institute the interdict application on their behalf when, in fact, they did not oppose the development on what had become a “degraded site”.

“The authorities received an application which envisaged rehabilitation of the river, public open spaces adorned by indigenous vegetation to replace golfing greens, the establishment of a heritage museum and an amphitheatre for use of both First Nation Groups and other members of the public and residential accommodation that would include affordable housing.

Jenkins and the Observatory Civic Association claimed before Judge Goliath that they had not been properly consulted.

Jenkins said he was authorised to act for the GKKITC in terms of a resolution under its July 2021 constitution. This had been approved by Paramount Chief Aran and others. He said in the interdict application that “given the urgency” he had been unable to get confirmatory affidavits.

He also stated that the leaders of the vast majority of First Nation organisations had “confirmed in conversations with me” that they were strongly opposed to the development.

In the rescission application, the GKKITC said the only binding constitution was that adopted in 2018.

Two of those cited by Jenkins as having authorised him to institute the legal proceedings had denied doing so, the GKKITC said. One, who did sign, was 85 years old and claimed to have been duped into signing it without being told what he was signing.

Following the ruling by Goliath in March this year, the GKKITC executive council had met and “revoked” any apparent authority given to Jenkins or Paramount Chief Aran and resolved they must resign or be fired, and that the rescission application be pursued.

However it had to be proved that the false evidence would have led to the judge coming to a different conclusion.

She said Petrus Vaalbooi, the leader of the ‡Komani San, whom Jenkins claimed was opposed to the development, had in the rescission application said: “I categorically deny that I have ever spoken to him … I don’t know who this person is and I have never met him.”

Vaalbooi said he and his people “unreservedly and unconditionally supported” the development.

Judge Baartman said Jenkins had alleged that some people had had a “change of heart”.

“But this does not answer Vaalbooi’s allegation that he had not met Mr Jenkins … in addition, Judge Goliath relied on Jenkins’ allegations,” Judge Baartman said.

Similarly, another IXau-Sakwa leader, Chief Danster, had also categorically stated that he had never had dealings or discussions with Jenkins or Aran and had expressed “shock” that his name had been used to lend credibility to something of which he had no knowledge.

“It seems Mr Jenkins was determined to stop the development at all costs,” Judge Baartman said.

“I do not come to this conclusion lightly,” she said, noting that Jenkins had been “contemptuously absent” from a hearing the day before the main hearing and that he had attempted to file a 1,500 page affidavit out of time.

The judge said Judge Goliath had acted on his misrepresentations, and she would not have entertained the application had she been aware that he was not authorised to institute the interdict proceedings.

In a related application heard at the same time by the same judges, the provincial government, the City of Cape Town, the developers, and the Western Cape First Nations Collective, also successfully appealed against Judge Goliath’s judgment.

The three appeal judges found that the Observatory Civic Association and Jenkins had, in any case, not established a prima facie right to the interdict as they could not demonstrate irreparable harm if the development continued.

Judge Baartman said an inquiry would have found many opportunities, including the promotion of the site’s heritage value and a boost for unemployment, which would outweigh any harm.

The Observatory Civic Association was ordered to pay costs in all the various court cases.

The costs order was just against the OCA

Previous:  No water, no electricity: stroke survivor Sizwe Memela has had enough