Slain mining activist to be buried on Friday 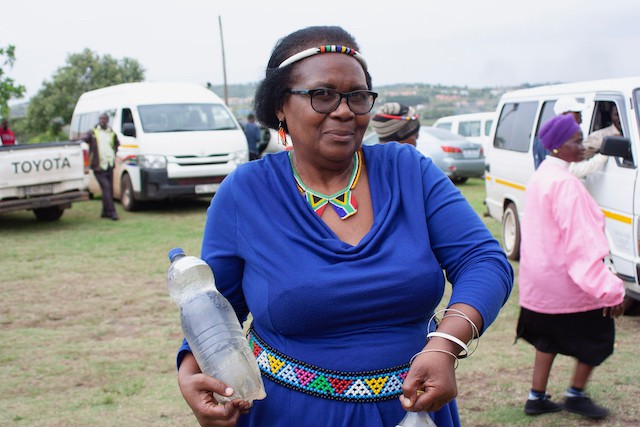 Fikile Ntshangase was part of a group taking legal action to prevent expansion of the Somkhele coal mine adjacent to Hluhluwe-iMfolozi Park in KwaZulu-Natal. Photos: Rob Symons

Murdered anti-mining activist, 65-year old Fikile Ntshangase, will be buried on Friday. A vocal opponent of the expansion of the Somkhele coal mine on the border of Africa’s oldest game park, Hlhuhluwe-iMfolozi in KwaZulu-Natal, she was a leading member of the Mfolozi Community Environmental Justice Organisation (MCEJO), which is taking legal action against mine owners Tendele Coal Mining.

There are two parallel cases before the courts. One, scheduled for hearing in the Supreme Court of Appeal on 3 November, seeks an order that all mining activities halt until the mine complies with environmental and other laws.

But the court challenge that allegedly put a price on Ntshangase’s life is MCEJO’s application to the Pretoria High Court to set aside Tendele’s latest mining right, issued in 2016 and covering a 222km2 area in Mpukunyoni. This is according to a joint statement from MCEJO, the Global Environmental Trust (GET), the Centre for Environmental Rights, and other organisations, who say the mine has caused “untold destruction of the environment” and adversely impacted people’s lives in the area. 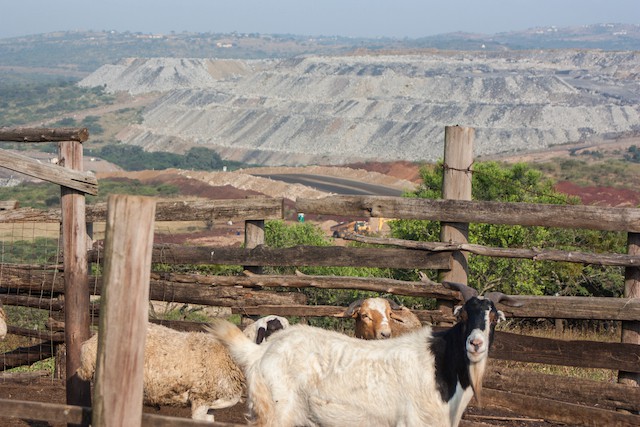 Hundreds of rural families complain that the mine has ruined their pastoral way of life. Regular blasting has also damaged homes.

Over the past few months, tensions have risen in the community over the proposed expansion of Tendele’s operations into the new mining area, and MCEJO’s opposition to that expansion.

GET spokesperson Sheila Berry says that recently Tendele had been pushing for an “agreement” to be signed between MCEJO and Tendele to withdraw its court challenges in view of the massive number of jobs that will be lost should the mine be unable to expand.

While seven members of MCEJO, including Sabelo Ddladla, a lead applicant in the court cases, recently signed a Memorandum of Agreement to this effect, Ntshangase stood her ground.

“Nsthangase refused to sign the agreement and days before her killing stated her intention to write an affidavit about an alleged offer of a R350,000 bribe in return for her signature,” says Berry.

“I refused to sign. I cannot sell out my people. And if need be, I will die for my people,” she is reported to have said.

At about 6:30pm on 22 October, four gunmen arrived at Nsthangase’s house, where she lives with her 11-year old grandson, about 500 metres away from the site of the planned mine expansion. She died at the scene of multiple gunshot wounds. 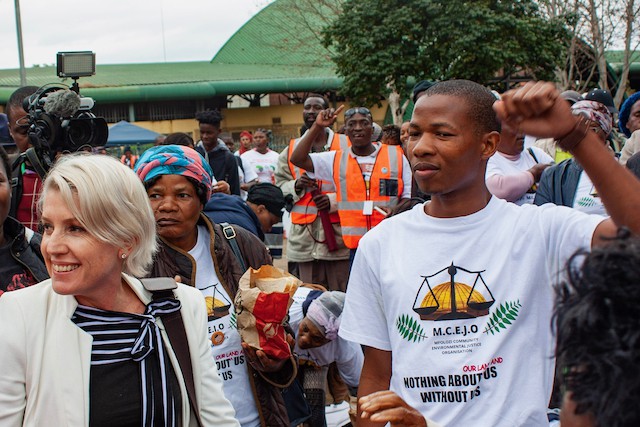 Sabelo Dladla (right), with attorney Kirsten Youens in 2018, is among a splinter group of seven MCEJO members who recently signed an MOU with Tendele to get all its members to withdraw legal cases against the mine following fears for their safety.

The latest joint statement from Tendele, local municipal councillors, traditional leaders and unions representing the mine employees, condemns the killing and calls for “calm and leadership from all parties to ease tensions”.

Tendele CEO Jan Du Preez has linked the murder and other recent incidents of violence and intimidation to concerns about retrenchments and job losses that will occur if all families living in future mining areas do not agree to relocate.

He says 254 families in future mining areas had agreed to move, accepting average compensation of R750,000 per household, but 19 families are still holding out, demanding excessive compensation.

He says the mine is operating lawfully, and expansion is necessary to keep the mine viable and protect 1,600 direct jobs and hundreds of indirect jobs in this impoverished part of the country.

The Mpunkyoni tribal area is home to about 158,000 people. Villagers make their living raising goats and cattle, and growing food. Many depend on social welfare grants and money sent by family members working in the cities. The mine and the park are the biggest employers in the area, with more than 3,000 full- and part-time workers between them.

In Divided We Dance, a 2018 short film directed by Anna Prichard, Somkhele villagers talk about the many difficulties they have faced since the mine opened in 2007, and how they once had cows, fields and natural water from the streams – much of which is now gone.

Villagers also complain of noise and dust from the mine, and point to cracks in the walls and windows of their homes that they say are caused by regular blasting. During visits to Somkhele over the years reporters have observed coal dust in the air and on the plants. 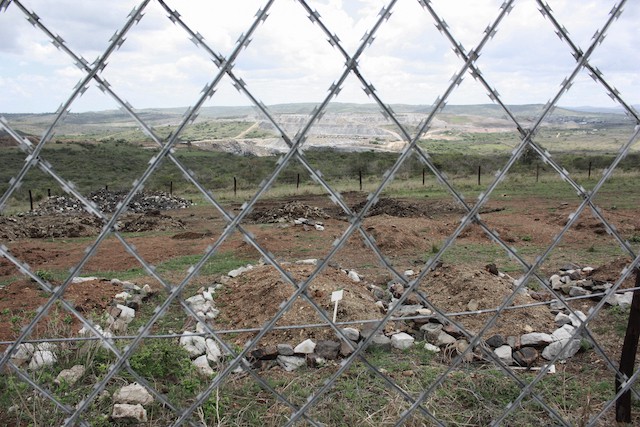 Many people relocated for the creation of the mine in 2007, are still aggrieved that graves were dug up and the remains reburied in a hastily constructed cemeteries without being properly identified.

The mine is also affecting Hluhluwe-iMfolozi Park. Frequent blasting rends the air and heavy machinery rumbles around the clock. A recent report by Ezemvelo KZN Wildlife, the government agency that manages conservation areas in KwaZulu-Natal, says the mine’s impact on the Hluhluwe-iMfolozi Park has increased substantially over the past two years.

“The noise and visual intrusion (day and night) into the iMfolozi wilderness area is significant and constantly noted by Ezemvelo staff and visitors on the trail, seeking a wilderness experience,” Jenny Longmore, Ezemvelo’s senior conservation planner, writes in the report.

The park’s white rhino (Ceratotherium simum) population is now in decline. Longmore has flagged a section of the park nearest to the mine as a “rhino poaching ‘hot spot’ zone”. She offers a number of explanations for this, including a growing road network and traffic around the mine, which make it easier for poachers to sneak into the park. 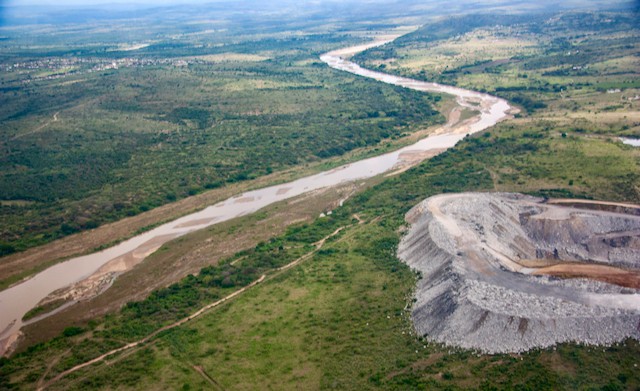 One of Somkhele’s mine’s discard dumps near the banks of the iMfolozi river – a vital water source in the area that also feeds iSimangaliso Wetland Park.

On the basis of the polluter must pay principle, Ezemvelo has asked the mine to fund a comprehensive study into the adverse impacts its operations have had on the park.

While the proposed northern extensions would not bring the mine closer to the park boundary, various environmental groups are quick to point out that the operation will continue to exact a toll on the quality of water in the iMfolozi River that feeds iSimangaliso Wetland Park, a UNESCO World Heritage Site about 15km downstream of the mine, on the edge of the Indian Ocean.

Tendele CEO Jan du Preez says the mine has gone to great lengths to protect water sources, while also providing water for residents in an area periodically hit by drought. He says Tendele is also engaging with Ezemvelo to set up biodiversity-offset zones.

The mine has also worked to address community grievances through quarterly meetings of the Mpukunyoni Community Mining Forum (MCMF), Du Preez says. The forum, which includes traditional leaders from 30 tribal wards, elected councillors from the local municipality communities directly affected by the mine, mine workers, and businesses that trade with the mine.

Attorney Kirsten Youens, who represents families adversely affected by the mine, reckons MCEJO has about 4,000 members. Du Preez disputes, saying it represents fewer than 150 people, none of which have attended MCMF meetings. He says the mine’s legal advisors are currently engaging with MCEJO with a view to finding an amicable resolution for all interested and affected parties.

“Mediation remains our objective to avoid the closure of the mine which will result in the loss of 1,600 jobs in an area where unemployment is rife. If the mine closes, this will have a devastating effect on the community as thousands of people benefit directly and indirectly from the mine,” says Du Preez.

He estimates that some 20,000 people directly benefit from the operation of the mine and a further 20,000 people have obtained educational and training benefits since the mine’s inception some 14 years ago.

While Tendele continues to blame people refusing to relocate for delaying the mine expansion, Youens counters that Tendele only has itself to blame for not getting free, fair and informed consent for its expansion plans from directly affected families, and for operating unlawfully without all the necessary environmental authorisations.

She accuses Tendele of inciting violence by pinning impending job losses on her clients.

“The strategies used by Tendele are sadly typical of many companies operating in impoverished rural communities,” she says. “Mines dangle incentives to impoverished community members with the inevitable consequences of stirring deep community divisions, which almost always lead to violence and deaths.”

Hluhluwe-iMfolozi Park’s Longmore acknowledges the mine is a major employer in the area, but argues it has fewer full- and part-time employees than the park. Jobs at Tendele will come to an end when the mine has been depleted, whereas the park and related projects have potential for growth and are timeless in value, she says.

Cheryl Curry, chief executive of the Wilderness Leadership School, which runs the wilderness trails in the park, says she hopes the courts will recognize this and the critical role wilderness areas play in the fight against climate change, protecting biodiversity and human well-being.

“Damage being done to the environmentally sensitive iMfolozi wilderness area is direct and immediate and permanent. It is happening now,” Curry says. “We are talking about … the protected heritage of [Zulu] King Shaka’s royal hunting grounds and about a scientifically proclaimed wilderness area with all that this entails, including the vital protection of its biodiversity.”

Next:  Province goes to court over River Club ruling