Limpopo learners sit at home because of a shortage of teachers 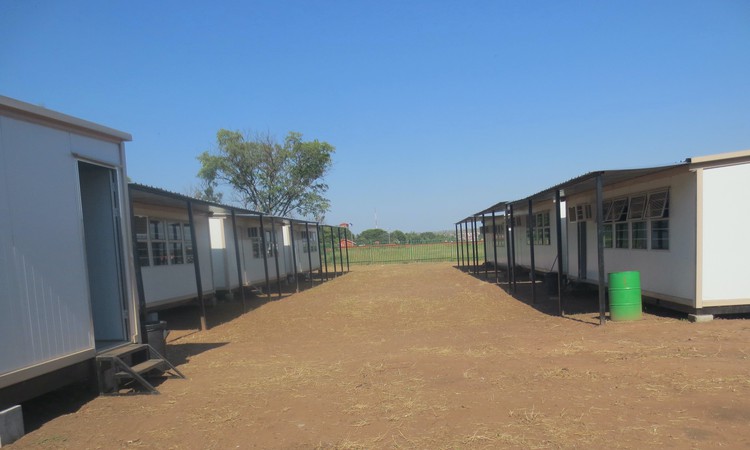 Parents at Laerskool Piet Hugo say the Limpopo education department has provided mobile classrooms but not the teachers to use them. Photo: Bernard Chiguvare

Learners from a Limpopo school are sitting at home because the school has no teachers for them.

The school governing body of Laerskool Piet Hugo says the Limpopo Department of Basic Education keeps sending more learners to the school which does not have the means to accommodate them.

The school, a couple of kilometres outside Polokwane, has 960 learners and 25 teachers. Last year the department put up six additional mobile classrooms for grades R to 6 and two extra toilets.

SGB chair Mokgadi Matli SGB said each classroom would accommodate 28 learners. She said parents had resolved to hire and pay three teachers, for grades R, 2 and 3. There are no teachers for the learners in grades 4 to 6, who are supposed to be taught in the mobile classrooms. The learners are still at home.

Matli, who has been on the SGB since 2018, claims the department promised in 2016 to build a block of classrooms and bring in more teachers, but it has only provided the mobile classrooms, which, she says, are not properly equipped.

But the department’s Tidimalo Chuene said the classrooms were equipped like all public schools, with chalkboards and furniture and would get air conditioning.

Parent Munyeta Susan Nyemvuka said her child, who is supposed to be in Grade 5, had been home since schools opened on 22 February. “Last year because of lockdown learners were disturbed and did not cover much of what should be covered in the year and now my child is still home. The Department of Education should fulfil its promises.”

Matli said on Monday 1 March the school had turned away about 40 learners because of a lack of resources.

Next:  Eastern Cape’s health workers have been betrayed by Covid-19 corruption

Previous:  More than 500 learners not placed in schools in Buffalo City