Three months in prison for trying to recycle waste during lockdown 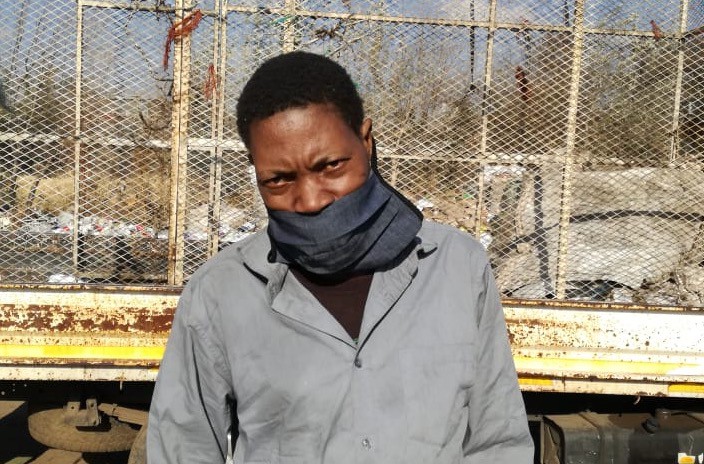 Justice Shabangu was arrested for collecting waste for recycling during lockdown and held for three months in prison. Photo: Stefan van der Westhuizen

Two men arrested for collecting and recycling waste during lockdown in Tshwane were released from Kgosi Mampuru Correctional Centre at about 5pm on Tuesday after spending three months in prison.

Justice Shabangu and George Mphotshe, were arrested on 7 April for continuing to work under lockdown level five restrictions which stated that everyone should stay home unless they were providing an essential service.

In a virtual hearing on Tuesday, Justice Brenda Neukircher of the North Gauteng High Court, declared the detention of the reclaimers unlawful and unconstitutional and ordered that they be released immediately.

On 29 June, Lawyers for Human Rights (LHR), representing the two men, submitted an urgent application to the court to have their detention declared unlawful and the men released.

Shabangu and Mphotshe live in an informal settlement called Mushroomville where most residents work as reclaimers - people who informally collect and sell recyclable materials.

LHR was unable to consult with the reclaimers because of the lockdown regulations which stated that no one would be allowed to visit prisons. As a result, Shabangu’s wife, Mamosioua Kao, submitted an affidavit. She said that it was difficult for the reclaimers to buy food and other essential items during lockdown. “Out of desperation to make some money for food and other essential items we needed to replenish,” she said, Shabangu and Mphotshe had “ventured out into Centurion to collect recyclable materials to sell”.

They were arrested by SAPS members for contravening level five lockdown regulations and taken to Sunnyside police station, she said. They were transferred to Kgosi Mampuru prison about a week after their arrest.

Kao said Shabangu had told her that one of the officials had said they would be released if they paid R600 to a Capitec account. She had collected money from the Mushroomville community, and made two payments amounting to about R710, but the reclaimers were not released.

Matsobane Mahlatse, Legal Services Regional Coordinator for the Department of Justice and Correctional Services, said their continued incarceration was “harsh under the circumstances” but could have been avoided had they “stayed home or obeyed the law”.

The investigating officer, Boitemolo Thole, said the reclaimers had appeared before the court but the matter kept being postponed. The court had directed that more information, on the place of residence and ID numbers of the reclaimers and other people who were arrested on similar charges, was needed before they could be released on bail. This had delayed the case and resulted in the reclaimers being detained for close to three months.

“I am very happy to be out. It was really difficult in there,” Shabangu told GroundUp on Wednesday. He said they had not had enough food and he had only been given his medication that he needs for a chronic illness after “about five days”.

He said he had tried to stay home initially because he knew he was not allowed to work, but he had run out of money to buy food for his family.