Langa residents are fed up with their police 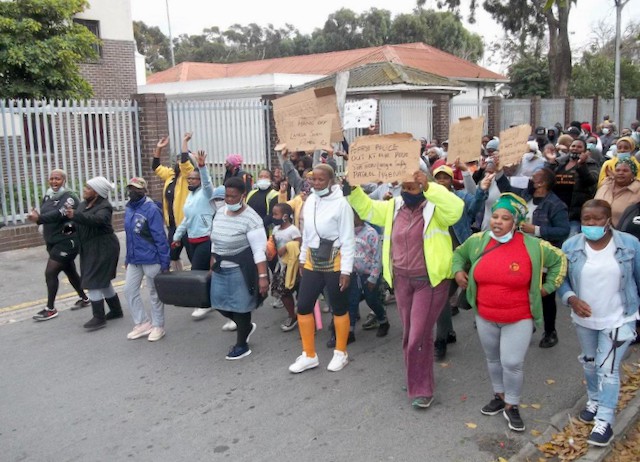 On Wednesday, scores of Langa residents marched to the local police station demanding that the police do their jobs. Photo: Vincent Lali

On Wednesday, scores of Langa residents gathered outside the local police station demanding that the police do their jobs. They want more visible policing and more patrol vans for the area. They also want the police to work with the 25-strong, voluntary Langa Safety Patrol.

The protesters sang struggle songs and waved placards as they marched to the station. Captain Adriaan Kraukamp received their memorandum of demands on behalf of the station commander who was unavailable.

“We can smell alcohol on their breath. They even sleep on duty,” community leader Zongamele Baliso said of the Langa police.

“If you do your job, then engage with the community and provide reports and stats on murders,” Baliso told Kraukamp.

Baliso called upon the police to work with the Langa Safety Patrol.

“The police must do their bit, while the patrollers do theirs. I don’t know how many times the patrollers have caught thugs without the police assistance,” he said. “We have solved more cases than the police have, and we have killed no one.”

“After I reported a burglary to the patrollers, they received a description of the burglars from my neighbours and hunted them down. The patrollers helped me,” he said.

Community leader Siyabonga Khusela said he had accompanied crime victims dozens of times to the Langa police station to report crimes. “None of the culprits are behind bars now,” he said.

He said residents now report crime to the patrollers instead of the police.

“I want the community to shut down the police station and hand it over to the patrollers to use as their office because the police don’t do their job,” said Khusela.

“I can’t make any decision, but I will hand over the memorandum to the station commander as soon as she arrives,” said Kraukamp.

Previous:  Even the rats have left this household now that the cupboard is empty