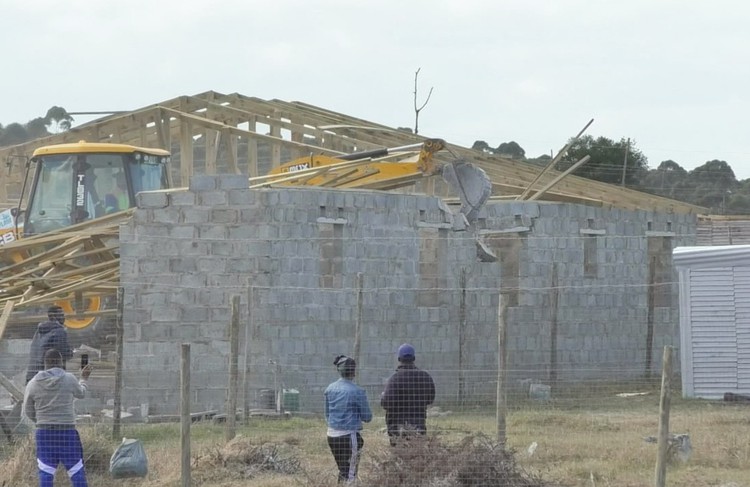 Hundreds of people who occupied land belonging to the Department of Public Works near the East London Airport were left homeless on Monday when their homes were demolished. Photo: Johnnie Isaac

Hundreds of people who occupied land near the East London Airport were left homeless on Monday when their homes were demolished.

At least 100 homes, some made of concrete blocks and mortar, were built on a piece of land belonging to the Department of Public Works and Infrastructure.

Some residents watched as the heavy machinery demolished their homes. Others anxiously await the return of the court sheriff who had warned of further demolitions this week. Community leaders estimate that the building materials lost add up to hundreds of thousands of rand.

Several people claimed that they had bought plots for between R500 and R15,000, but community dnied this.

Thabile Manuel had just moved into her home in June after spending nearly a year building it. “I am in deep pain with what is happening right now. We have lost everything we have put towards building this house. We did not even get eviction notices. We just saw the police coming and demolitions starting,” she said.

Other residents told GroundUp they had received eviction notices but only when the court sheriff arrived with the police. The notice dated back to 2017.

Thembile Ndibaza claims that they were given permission to occupy the land. “When we showed those agreements to the police, they told us that those papers are not legitimate. The sheriff is using a letter dated 2017 for a different piece of land, not this one.”

Ndibaza said they decided to build on the land a few years ago because it had become a crime hotspot. “Women used to get raped here, dead bodies dumped here and stolen livestock also got slaughtered here. Since we built houses, those activities stopped,” he said.

Another resident, Lulama Rantjie, said, “We are left with nothing. They took our furniture and our building material. We don’t know where we are going to sleep.”

Department of Public Works and Infrastructure spokesperson Lunga Mahlangu said residents were warned about pending evictions because the land is not designated for housing.

“We only demolished new structures, unoccupied structures and structures that were under construction. Those structures fell on the piece of land that is not designated for human settlemen; it interferes with the airport runway,” said Mahlangu.

It is unclear if the department will obtain a court order for the remaining homes.

Next:  15km queue at Zimbabwe border