People are sleeping outside offices to avoid long queues 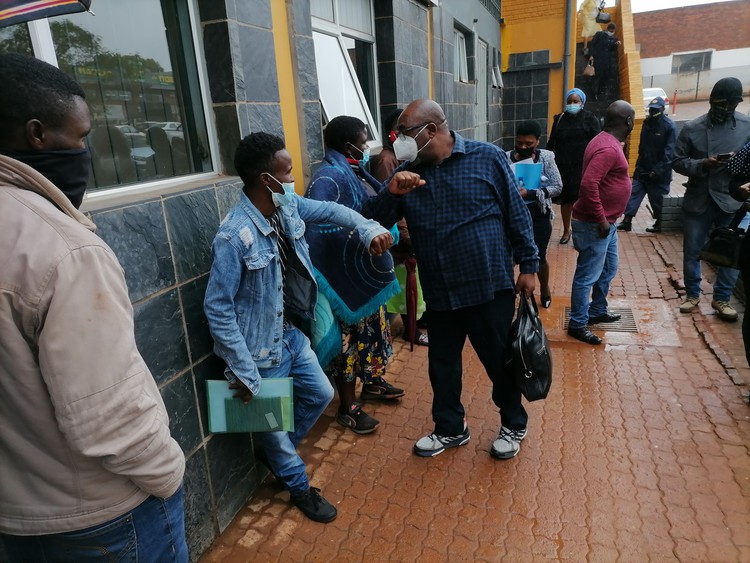 Labour Minister Thulas Nxesi has promised to send a bus to serve as a mobile labour office to assist people living in rural areas in Limpopo. Many people have resorted to sleeping outside the Thohoyandou office to be among the first in line to apply for Unemployment Insurance Fund (UIF) benefits but they are often still not served that day.

In September, GroundUp reported on more than 100 people who had been sleeping with blankets and cardboard sheets outside the Makhado labour office in Louis Trichardt. Many people we spoke to were returning to the office for assistance after being turned away due to a limit on the number of people served per day.

At the time, the provincial department spokesperson said they were short-staffed and as a result were battling to keep up with the demand of applicants.

In response to many complaints, Nxesi and Deputy Minister Boitumelo Moloi visited the Thohoyandou Labour Centre on Tuesday. Nxesi promised that the department would get a mobile office to provide basic assistance to people in remote villages.

Among those waiting in the long queue outside the office was Thabelo Nemavhola from Tshipako village, which is about 27km away. Nemavhola has to get the 4am bus to town and pays R46 per round trip.

“For three days I have been visiting this office. The queue was snaking and I was not served though I arrived as early as 5am. People had been sleeping outside,” said Nemavhola. She was there to apply for UIF after losing her job In August 2020. She was eventually assisted during the minister’s visit on Tuesday.

Commenting on the long queues at some labour offices, Nxesi said the Covid-19 pandemic has had a massive impact on service, with “millions of people flooding our offices” after losing their jobs due to lockdown.

“Some of our systems collapsed because they were not used to dealing with huge numbers. Due to Covid-19 protocols, some of our staff members worked from home and this partly contributed to the long queues. In addition, some of the people who were supposed to apply for the R350 social distress grant, got lost queuing at our offices and we redirected them to the right offices,” said Nxesi.

Next:  Massive database of killings by police made public