Although the decision has brought some relief, reclaimers still say they have not been made a part of the city’s recycling programme 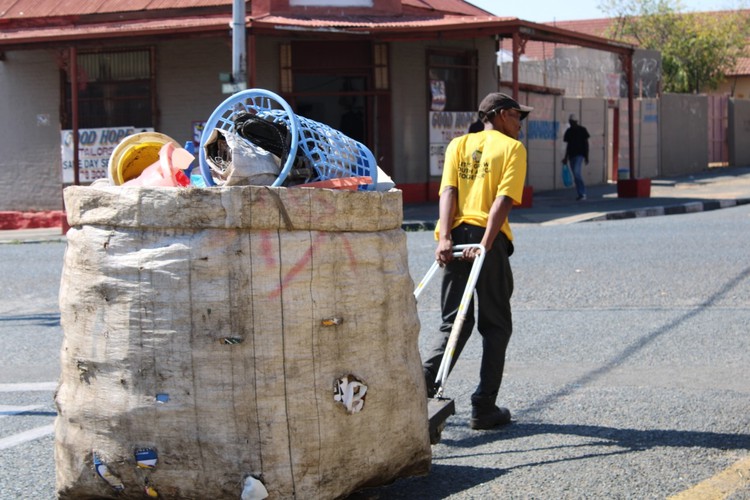 Mokoka Mokoka is a reclaimer with the African Reclaimers Organisation. He says he wakes up at 4am to get to work before Pikitup trucks collect recyclable materials. Photo: Masego Mafata

The African Reclaimer’s Organisation (ARO) is relieved that Pikitup has withdrawn its plans to charge households a R50 recycling levy, as part of its plan to separate garbage when collecting from people’s homes.

A joint statement on 14 May by the City of Johannesburg and Pikitup said the decision was because of “feedback from various stakeholders”, including residents who opposed the levy.

ARO submitted a petition to Pikitup on 7 May, calling on the City to stop the proposed R50 recycling levy. Members of ARO, as well as other Johannesburg residents, were concerned that the fee would leave informal reclaimers without an income.

“We feel that the decision to withdraw the R50 levy is a victory for accountability [and] for citizens rising up,” said Eli Kodisang, an organiser at ARO.

However, Kodisang criticised Pikitup for not consulting reclaimers enough, as well as the City for not integrating reclaimers into its waste management plan.

“Other than acknowledging that the petition is receiving attention, we have not received any response from the department, the MMC and Pikitup,” said Kodisang.

Pikitup told GroundUp that its “separation at source” programme will continue in areas where it is already operational.

“It has been determined through experience that the programme does not threaten the waste pickers’ livelihoods because they are the first to arrive and take whatever recyclable materials that they so desire before a Pikitup truck collects the recyclables,” said Muzi Mkhwanazi, Pikitup spokesperson.

But Kodisang explained that it is more complicated than this: reclaimers have to sleep in public places to be closer to where they work to ensure that they collect recyclable materials before Pikitup’s trucks arrive. He also complained that informal recyclers have been pushed out where the “separation at source” programme has been implemented.

“The City is spending millions of rands a year paying these companies for services that they’re not delivering instead of helping more efficient informal reclaimers,” he said.

Next:  No budget for janitors at Cape Town informal settlement