No budget for janitors at Cape Town informal settlement 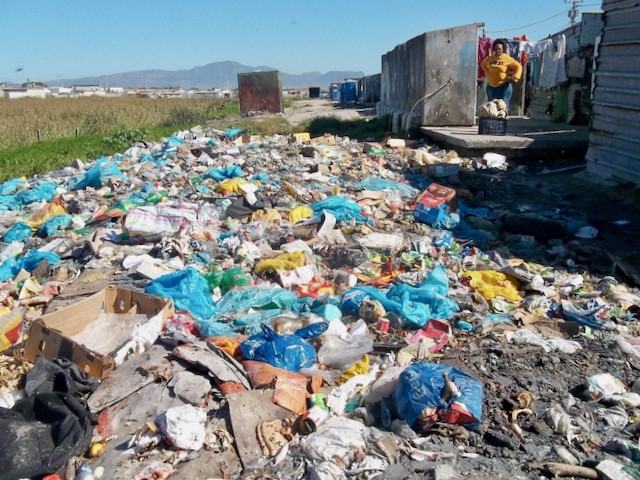 Residents of Siyanyanzela informal settlement, Philippi, have resorted to buying water pipes to repair their communal toilets installed about 12 years ago.

Lulama Matiyase said she and her neighbours bought pipes and paid a local plumber to install the pipes twice already this year. Otherwise “you have to collect water with a bucket from the tap outside and use it to flush”, she said.

According to community leader Nokwenzeka Qhwitha, the City of Cape Town hired two teams of janitors for six months each, but they did not clean inside the toilets. “They refused and said they feared for their health as they were not inoculated,” said Qhwitha.

Currently, there are no janitors employed.

She said stinking rubbish has been piling up next to the toilets and the communal water tap. She said some formal house owners nearby also emptied their wheelie bins on the tip; others dumped construction rubble when they did home renovations.

“The City of Cape Town used to use bulldozers to remove the rubbish and the rubble, but it stopped some years ago,” she said.

“We do get [given] blue rubbish bags, but we don’t know where to discard them,” she said.

She said the rubbish was blocking entry to Siyanyanzela. “If your relatives are sick, you have to carry them on your shoulders or on a stretcher to an ambulance waiting in neighbouring Holomisa Street.”

“When police come to take a statement after you report a crime by phone, you must meet them outside Siyanyanzela because they can’t walk or drive through the muddy rubbish and meet you,” she said.

Community leader Zimkhitha Mbhotoli said they used to remove and burn the rubbish but now it has overwhelmed them.

She said they wanted a rubbish skip and the City to enforce no dumping. “We are prepared to snitch on illegal dumpers,” said Mbhotoli.

The department is trying to source funds from other City budgets. “However there is a chance it will not be possible to hire new candidates until the new financial year due to financial regulations,” she said.

Limberg confirmed there had been delays in the inoculation process. “These challenges have since been resolved,” she said.

“With regards to the conditions of the toilets, a team was dispatched to the site to investigate this complaint, but were forced to leave on Friday, 23 April 2021, after being advised by a community leader that the area was unsafe for them … They will return as soon as it is deemed safe,” said Limberg.

Next:  “The air we breathe is killing us”: “Deadly Air” case finally goes to High Court