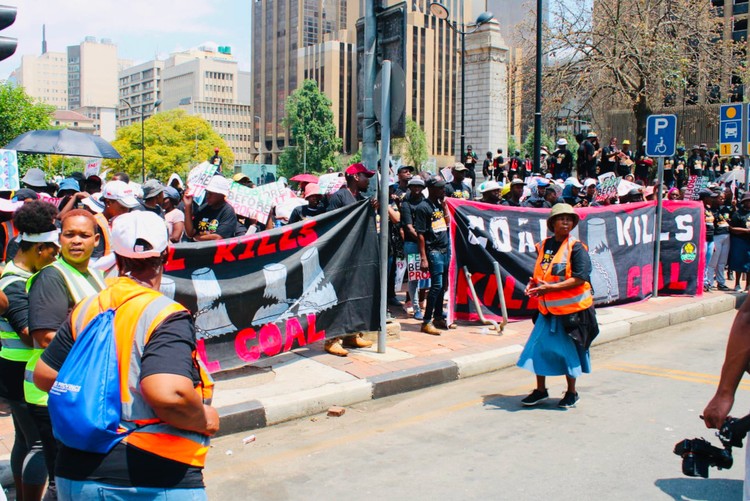 Over 500 people march to the Constitutional Court in Johannesburg to call for “workable solutions” to the climate crisis. Photo: Kimberly Mutandiro

On Thursday, over 500 people from across Gauteng marched to the Constitutional Court in Johannesburg to demand urgent climate action. They want South Africa’s delegates at the ongoing United Nations COP27 climate summit in Egypt to come up with “workable” solutions to the climate crisis.

The demonstrators brought traffic in the Johannesburg city centre to a standstill. The march was led by Earthlife Africa, an environmental justice organisation.

Outside the Constitutional Court, protesters held up shadow pictures to represent “fallen climate legends” in South Africa and across the globe. These allegedly murdered climate activists include Sikhosiphi “Bazooka” Rhadebe and Fikile Ntshangase, and Ken Saro-Wiwa and other activists hanged in Nigeria in the 1990s for challenging oil extraction by Shell.

“We want to remind our South African delegates who are currently in Egypt that we’ve been having floods in KwaZulu-Natal, drought in the Western and Northern Cape, and that they should incorporate such issues in the decision-making process and address climate change now,” said Ulrich Steenkamp of Earthlife Africa.

Activists called on the government to put an end to the use of oil and coal.

Bongani Ka Mthembu, who comes from a farming community in Westside Park Zone 21 in Sebokeng, says his community has been suffering from high drought levels and has been without electricity since 1996.

Bongani Mzantsi says he comes from a community in the Vaal near a Sasol plant.

“The air we breathe is [toxic]. People in our community have respiratory problems. Government should do something to ensure that we live in an environmentally-friendly community,” Mzantsi said.

Next:  City of Joburg breaks promise on R23-million library

Previous:  “We did not vote for water trucks and Jojo tanks”