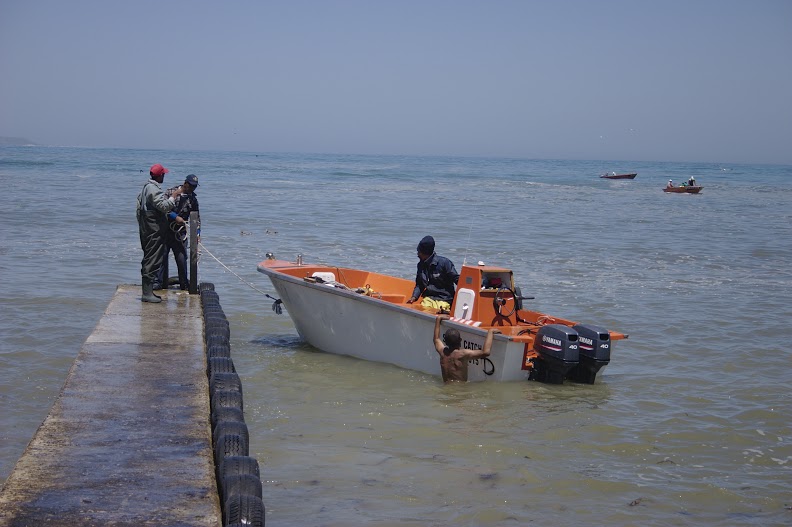 Today is World Oceans Day. According to the United Nations, this is a day for “celebrating the role of the oceans in our everyday life and inspiring action to protect the ocean and sustainably use marine resources”. Yet small-scale fishing communities have little to celebrate. Despite the recognition of the small-scale fishing sector in the Amendment to the Marine Living Resources Act, they are still extremely marginalised and over 10,000 small-scale fishers have been excluded from accessing their traditional fishing rights.

The World Oceans Day Network celebration is focused on the sustainability and conservation of the oceans, aimed at achieving 30% protection of the oceans by the year 2030 (“30x30”) in alignment with the UN Sustainable Development Goals, especially goal 14.

While it is important to address the challenges in the ocean, such as biodiversity loss, this narrative often lacks a human rights perspective, and raises the question of who is benefiting from the ocean and who it belongs to. It is imperative that the protection and use of the world’s oceans and resources includes coastal communities in order to ensure social and environmental justice.

The current global discourse on sustainable development of the oceans comes with a focus on the Blue Economy or Blue Growth agenda. This is presented as a win-win-win solution in utilising the oceans, providing economic growth and job creation while addressing conservation challenges. But this agenda is also associated with commodification, monetization, and privatisation of marine resources, as well as the dispossession and forced removals of indigenous communities along the coast.

Operation Phakisa is South Africa’s Blue Economy strategy, aiming to increase development, accelerate economic growth, and address the issues of poverty, inequality, and unemployment by developing the ocean. Developments such as oil and gas exploration, coastal mining, aquaculture, industrial fishing, as well as the expansion of Marine Protected Areas (MPAs) are being advanced by the state and corporates, often with massive foreign investment. The development of these projects mostly excludes from official decision-making processes the voice and participation of those whose livelihoods and communities depend on the ocean.

While recognising the importance of growth and development in South Africa, it is also important to understand what kind of development is sustainable and compatible with environmental and social justice concerns. Industrial and commercialised ocean developments such as those supported by Operation Phakisa are high capital projects that undermine the voice of affected communities, while the development and support of small-scale fisheries is supportive of human rights and sustainable livelihoods.

MPAs, for example, are a simple tool for ocean management and in order for them to be effectively managed, the social implications for the livelihoods of communities need to be considered in addition to the ecological and biological implications. MPAs are predominantly located in coastal areas of high biodiversity, meaning that their development directly impacts the culture and survival of small-scale traditional fishing communities. These communities, therefore, need to be actively involved in decision-making processes and co-management plans.

Small-scale fishers (SSF) play an extremely important role in securing the food and nutrition security of their households and communities while presenting a viable and sustainable use of the ocean resources. They are the primary custodians of our oceans, having survived and made a living from them for generations. But, under South Africa’s Small-scale Fishing Policy, which was gazetted in 2012, only 47% of the 22,621 fishers who applied for rights are now successfully registered. This means that over 10,000 bona fide small-scale fishers are forced to fish illegally or with recreational permits and are unable to sell their catch for income.

Then there are also those thousands of fishers who could not apply. Infrastructural challenges and a lack of support from the state and limited consultation and public participation processes have undermined the viability of small-scale fishing. This has resulted in fishers finding themselves in a situation that forces them to engage in low-level poaching (for food) activities. They find themselves criminalised for practicing their cultures and traditions.

Both in normal times as well as in times of disaster, small-scale fishers and their cooperatives are not supported by government with necessary infrastructure, petrol subsidies, social security, skills training, or access to markets. This undermines the important role that small-scale fishers play as providers of nutritious food and in creating sustainable livelihoods in coastal communities.

Even as the economic crisis resulting from the Covid-19 pandemic unfolds, we witness an increase in the promotion of Operation Phakisa and the associated extractive industries on the coast and in the oceans to create growth without any regard for environmental and social sustainability. Small-scale fishing communities are losing their fishing grounds and are forced to opt for low-paying and inadequate jobs created in these extractive industries at the expense of their cultural activities, heritage, and traditional livelihoods.

For the just and equitable development and protection of the oceans, it is imperative we adopt a human rights-based approach, ensuring the principles of participation, transparency, accountability, good governance, equality, and non-discrimination. South Africa needs to uphold its commitments to international treaties and conventions, to protect and respect human and labour rights and environmental justice rather than work in favour of foreign investors and conservation standards.

Decision-making processes must be democratic, ensuring the principles of free, prior, and informed consent, with adequate consultation of affected communities. We can foster human equality and build a relationship to the environment that enhances rather than degrades the functioning of ecosystems.

Maia Nangle is the research and information officer at Masifundise, an organisation that works to empower small-scale fishing communities.

Next:  Family left without breadwinner after methanol poisoning deaths