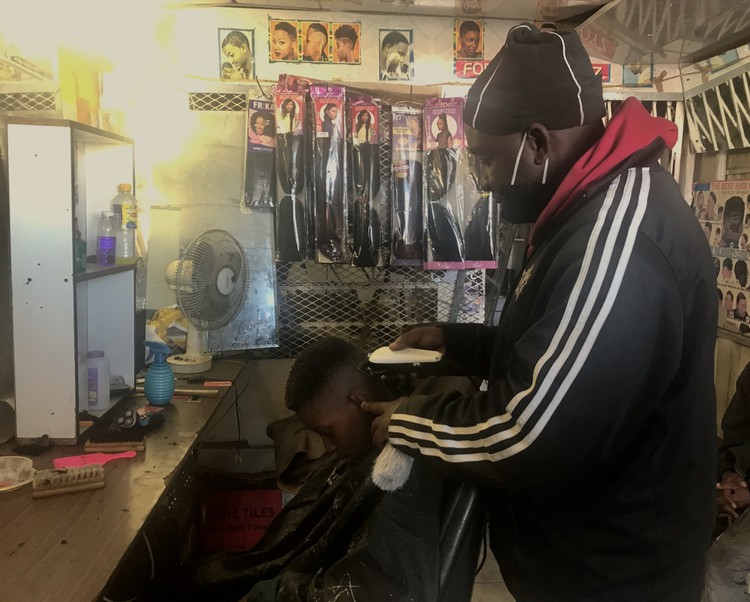 Abdul Seheky, an asylum seeker from Tanzania, runs a barber shop on Delft Main Road. He was left traumatised when a person was shot dead in his shop in mid-July. Photo: Tariro Washinyira

The African Diaspora Forum (ADF), says immigrant-owned shops face continuous attacks. Amir Sheikh, spokesperson for ADF, which was created as an immediate reaction to the xenophobic attacks that rocked the country in May 2008, told GroundUp that immigrant businesses are targeted almost daily. He said there is no support for them from the authorities, in fact quite the opposite.

“Migrants daily experience intimidation, harassment and extortion from the same law enforcement officials and police that were meant to protect them,” said Sheikh.

Silindile Mlilo, of The African Centre for Migration and Society based at the University of the Witwatersrand, which manages a project called Xenowatch to monitor xenophobic violence, said immigrant business owners are forced to pay protection fees. “About three immigrants were killed in Philippi for not paying protection fees between May and June,” she said.

Immigrant business owners in Delft told GroundUp they are continuously targeted by criminals and also attacked when protests erupt. In the week of 21 July, protests over shack demolitions erupted in Delft. Police spokesperson Colonel Andrè Traut said businesses were looted but no specific nationality was targeted.

But GroundUp spoke to immigrants with businesses in Delft, where at one location there is a spaza shop run by a Somali, a Cameroonian woman selling hardware, a vegetable stall owned by a Zimbabwean, and three hair salons owned by a Tanzanian, a Congolese man and a Zimbabwean.

The Congolese man lives in Eerste River with his wife and three children and asked not to be named. He fled his country in 2000 and established his hardware store in a container in 2002.

On 21 July his premises were torched. He had been selling cement and electrical and plumbing material. “Nothing was saved,” he said.

This is the second time his container was burnt out. In 2016, nearly all the immigrant container shops on Mango Street, Delft South, were torched.

“At that time police came and opened a case but we never got feedback. So this time I didn’t report. It is a waste of time.

“I know incidents in which other immigrants caught the robbers red-handed but action was never taken against the criminals. They are still roaming the streets and terrorising us.

“Reporting won’t bring my business back. Now, I need to focus on repairing the container and raising startup capital,” he said.

A Cameroonian asylum seeker, who came to South Africa in 2012 and renews her status every six months, owns a hardware container next to the one that was torched. She also asked to be anonymous. She used to stay in Delft but has since moved and did not want to reveal where she is currently living.

Speaking at her shop, she said her life is under threat, but she has no choice but to work extra hard to enable her to send money to her child studying in Canada.

“Criminals used to bang on our door and rob us at gunpoint. Here at work, I have been robbed several times. I am forced to pay protection fees of R50 every day.

“Three months ago there were gang shootings. One of the gangsters hid here inside my container. I was traumatised … I am scared. Everyday there is shooting. If I go back home, how will I survive? Life there is a nightmare. My family in Cameroon depends on me,” she said.

A Tanzanian asylum seeker, Abdul Seheky, who has a barber shop opposite the torched hardware container, said that when there are protests, people try to loot their shops. If they don’t get access, they burn the the shops down.

He said he is still in shock after a man was shot dead in his shop in a gang fight in mid-July. He does not know if the man was a bystander or involved in some other way.

“Today [26 July], three guys came and demanded money. I gave them R5 each because it has been quiet since morning,” he said.

He has been living in South Africa since 20000. He is married to a South African woman and has two children. “I have to be strong because my family needs to eat,” he said.