“I can’t even feed my children” says unemployed farmworker 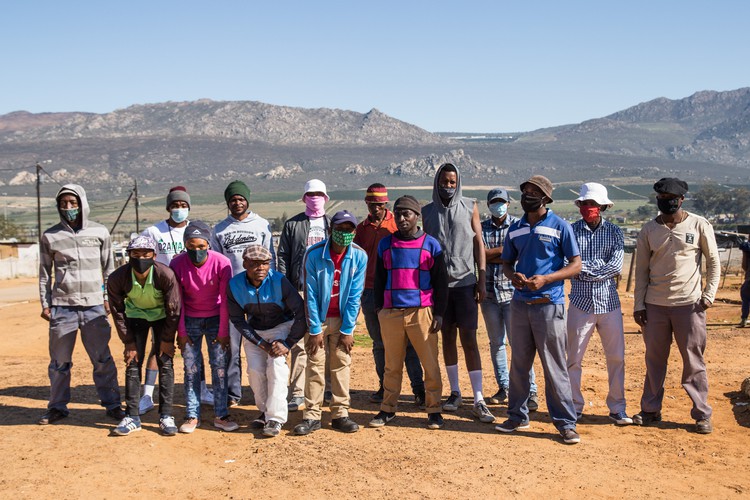 Some of the migrant farm workers taking the owners of Paardekop Vrugte in Citrusdal to the Commission for Conciliation, Mediation and Arbitration, claiming unfair dismissal. Photo: Ashraf Hendricks

Over 30 farm workers have taken the owners of Paardekop Vrugte in Citrusdal in the Western Cape to the Commission for Conciliation, Mediation and Arbitration (CCMA), claiming unfair dismissal. They also argue that their eviction from hostels on the farm was illegal.

On 10 March, the migrant workers from Lesotho returned to work after a week’s leave to find their belongings dumped outside and were told that they no longer had employment. The farm workers claim that some of them had been working on the farm since 2008.

Farm worker and supervisor, Eketsang Mohlomi, said he has been working on the farm for 12 years. “We had gone back home to Lesotho for a week with transport provided by the company. While away, we got calls from other colleagues telling us that our belongings like clothes and appliances, were sitting outside,” he said.

“We lived at the farm hostels, some of us lived there with our families. Even though the conditions of the hostels were crowded and unhygienic, we were grateful to have jobs and shelter,” said Mohlomi.

GroundUp met with some of the workers in a dusty township in Citrusdal with Paardekop Vrugte visible in the distant background. Several of the workers spoke at length of their trying experiences while working on the farm. As each one gave their account, the others sighed and nodded in agreement. They say since being laid off, life has been extremely tough.

Depending on their duties, the farm workers were paid between R162 and R194 per day.

Working at the farm since 2013, Tebello Sengoai said, “The way we were treated by the farm owners was not good. Working on public holidays and not getting paid for it, not being paid when off sick even if you bring in a doctor’s note, and being told to work even when it is raining.”

Sengoai, who is a father to three children, aged three, six and 12, said life without a job was proving to be tough as the months went by. “I am struggling…I can’t even feed my children. We have to borrow and loan from people and family to survive. Imagine having to pay rent when you’re unemployed.”

Malizo Kwinana, from the Commercial Stevedore Agricultural and Allied Workers Union (CSAAWU), has been assisting the farm workers with their case. He said, “During the Covid-19 pandemic, more than 70 migrant workers from Lesotho had started working on the farm.

“We have referred the matter to the CCMA but no consensus has been reached yet. The farm owner informed the workers that they are willing to pay those who started working on the farm in 2016, 2018 and so on, retrenchment payments amounting to one week’s salary for each year of employment. We are waiting for the arbitration certificate to challenge the matter with evidence at the CCMA,” said Kwinana.

Asked about the dismissals, eviction and other claims made by the farm workers, one of the Paardekop farm owners, Erasmus Van Zyl, told GroundUp, “The matter is sub judice. We await the outcome of the CCMA referral.”

Next:  Not introducing a Basic Income Grant could be “disastrous” says ANC report