NEHAWU and PSA have rejected an offer of a 1.4% increase. The unions are demanding a 7% increase, among other benefits

About 400 SARS workers and union members marched from Madiba Street in Pretoria to the National Treasury office and to the revenue service’s head office on Wednesday to mark the start of their nationwide strike for higher wages. Photo: Chris Gilili

Hundreds of South African Revenue Services (SARS) workers picketed outside offices on Wednesday to mark the start of their nationwide strike for higher wages, among other benefits.

The workers, affiliated to the National Education Health and Allied Workers Union (NEHAWU) and Public Servants Association (PSA), are demanding an across the board wage increase of 7%.This comes as negotiations, which started in January, between union representatives and SARS deadlocked this week. SARS initially tabled no increase, while workers demanded 12%.

According to NEHAWU and PSA, SARS has since offered a 1.4% increase while workers demand a 7% increase.

The unions are also demanding, among other things, ten more days of annual leave specifically for Covid, medical aid, a housing allowance for all employees, and a R2,000 “token of appreciation” payment to staff over 60.

In an earlier statement SARS said: “Like all government institutions, SARS is affected by the financial challenges facing the country, and as a result, in SARS’ funding allocation from the National Treasury, no provision was made for salary increases.”

In Pretoria, about 400 workers and union officials gathered in Madiba Street before marching to the National Treasury office and to the revenue service’s head office.

NEHAWU’s national spokesperson Lwazi Nkolisi told GroundUp that workers would not return to work until an agreement was reached with SARS.

When the large crowd reached the Treasury office, the unions refused to hand over their memorandum of demands to a junior employee who was sent out to accept it. Then deputy director-general for Corporate Services, Stadi Mngomezulu, came out to sign the memo.

PSA spokesperson Reuben Maleka said: “It’s unfortunate that the action will cripple economic activities until the employer revises their offer to acceptable terms for consideration. We have no other option but to undertake industrial action.”

A SARS worker, who asked for her name to be withheld, said she could not adequately provide for her family on a monthly salary of R6,000 a month as an assistant administrator. She is a single mother of three young children.

“We hope the strike will convince our employer to give us a better wage, so we can live. This strike is long overdue. Everything is expensive nowadays, food and fuel are going up, yet we still get paid peanuts,” she said. 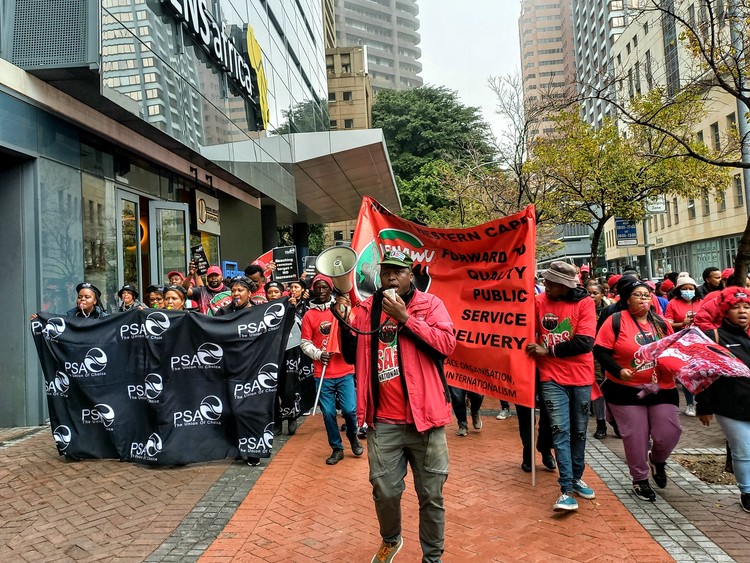 SARS workers members protested outside the offices in Cape Town city centre on Wednesday. Workers have vowed to continue protesting until their demands are fully met. Photo: Marecia Damons

In Cape Town, about 80 people picketed outside the revenue service’s offices. Aileen Mosetic, acting provincial manager for PSA in the Western Cape, said workers are rejecting SARS’s offer of 1.4%. “We know that there are financial difficulties, but they need to improve their offer,” said Mosetic. She said about 10,000 SARS workers nationwide are included in the wage negotiations.

During a lunchtime picket in Cape Town on Tuesday, Baxolisa Mali NEHAWU Western Cape provincial secretary said following negotiations, SARS offered to use R430 million to give workers a salary hike based on their performance.

Mali said SARS had also offered a once-off cash gratuity of R35,000 for each worker. “It’s a lot of money for workers on a lower salary scale. But for some workers, that R35,000 will mean little, depending on their employment levels.

”If you give people money once-off, their pension still remains where it is,” said Mali.

The memo was accepted by Willie Viljoen, a regional director in the Western Cape, on behalf of SARS Commissioner Edward Kieswetter.

SARS told GroundUp it will only provide detailed answers to questions once the unions had consulted members and responded to SARS.

Next:  Learners and teacher injured in school protest