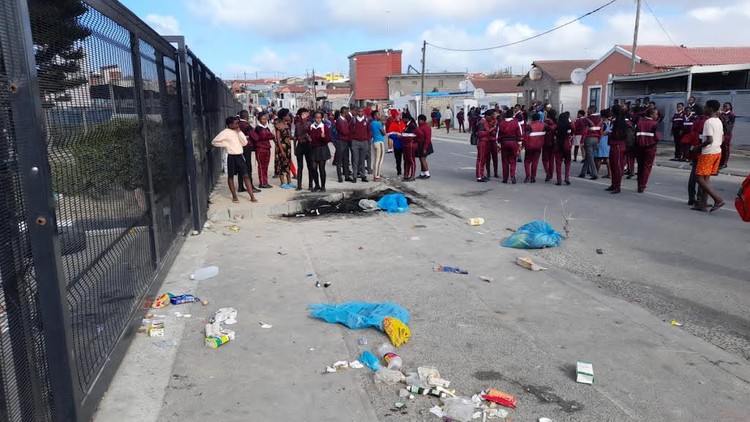 Learners at Kwamfundo Senior Secondary School in Khayelitsha burned rubbish during a protest about the cancellation of extra classes. Photo: Nombulelo Damba-Hendrik

Several learners and a teacher were taken to Khayelitsha District Hospital on Wednesday after being injured during a learner protest at Khayelitsha Kwamfundo Senior Secondary School.

Grade 12 learners are accusing school principal Mongezi Bonani of refusing to pay teachers an allowance for extra classes taught. They say as a result teachers have cancelled the extra lessons.

They are also demanding that the school return money they paid for a school trip which has now been cancelled.

The protest started just after 8am in front of the school staff room. Learners sang and burned rubbish inside the school premises. Bonani left.

When GroundUp arrived, a number of students were in a teacher’s car struggling to breathe. They were rushed to Khayelitsha District Hospital.

Police told the students who were still inside the premises to leave. Students threw stones at the Law Enforcement officers and at people who were inside the school yard, mostly staff members.

Mjingwana said, “At this stage it’s hard to say exactly why the learners are protesting. As you can hear they are talking about teachers not being paid for extra classes, which resulted in extra classes being stopped.”

“What I can confirm is that eight learners and an assistant teacher were rushed to hospital. Some inhaled dust from the burning rubbish, while others got injured as they were pushing to get out of the classes,” he said.

Mjingwana said there would be a meeting with teachers on Thursday and if necessary with parents.

A grade 12 learner, who gave his name as Lwazi, said the learners were frustrated because the extra classes had been a help.

“On Friday we are supposed to start writing exams,” he said. “The principal knows that we need those extra classes and teachers have made it very clear to us that extra classes will only resume once they are paid.”

Bonani did not respond to GroundUp’s calls and messages. (The education department does not allow principals to speak to the media.)

The Western Cape Education Department said it would comment today. Comment had not been received at the time of publication.

Next:  We visited these schools in 2013. We went back last month. Here’s what we found