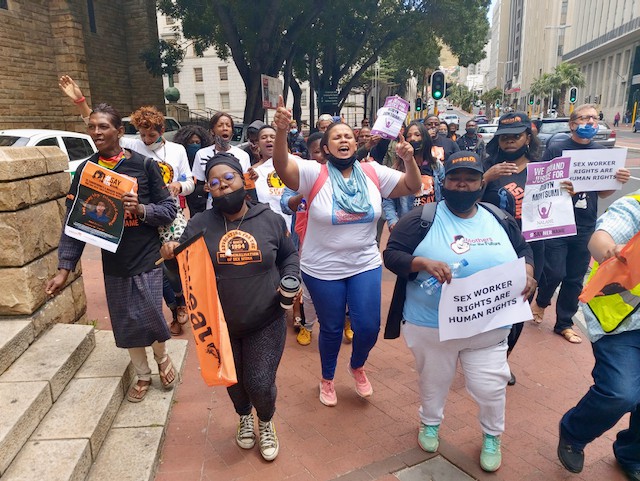 Sex worker activists from SWEAT marched to the South African Human Rights Commission (SAHRC) offices in Cape Town on Wednesday, demanding that it hold people to account for the death of Robyn Montsumi in police cells. The SAHRC has been investigating for seven months says SWEAT. Photo: Liezl Human

The Sex Workers Education and Advocacy Taskforce (SWEAT) demonstrated outside the offices of the South African Human Rights Commission (SAHRC) on Wednesday.

The protesters wanted answers over the death of Robyn Montsumi in custody at Mowbray Police Station in April this year. The SAHRC has given no feedback on the progress of its investigation of seven months.

Members of SWEAT handed over a memorandum demanding that the SAHRC fulfills its constitutional mandate to investigate Montsumi’s death, that it arranges a meeting with police watchdog IPID, and that it conducts an investigation independent of SAPS.

Eugene Van Rooyen, SWEAT Western Cape area manager, said according to eye witnesses on 9 April, during Level 5 lockdown, Montsumi was apparently searched, assaulted, and detained by law enforcement. She remained in the holding cells for about four days. She was found dead in the cell.

“People kept on going back and speaking to her through the window. She was telling them that she was seriously sick and throwing up. She said she needed help and that she had nothing to eat,” said Van Rooyen.

Van Rooyen said that SWEAT has received no feedback from the SAHRC on its investigation into Montsumi’s death, despite various promises that it will arrange meetings with SWEAT and IPID. None of these meetings have taken place.

Nosipho Vidima, Programme Manager at SWEAT, said, “They could have actually communicated with us. If the investigation process is slow. Then they need to tell us it’s slow right now and not just move on as if we haven’t even submitted an enquiry.”

Dudu Dlamini, Advocacy Manager at SWEAT, said sex worker issues are ignored because they are criminalised. “Unfortunately democracy is only for certain people - not for sex workers.” She said Montsumi’s family has had no closure.

During the protest, an administrative assistant of the SAHRC came out to receive the memorandum, since the commissioners were not there.

“It’s the last time now that we will follow up,” said Dlamini. “If they don’t respond, we will come back in numbers.”

SWEAT gave the SAHRC a deadline of 15 November to respond.

The SAHRC had not responded to GroundUp at the time of publication.

IPID told GroundUp that it has finalised the matter and that the docket was sent to SAPS for inquest. Our understanding that an inquest is conducted when a death occurs in custody but not directly by police violence (e.g. illness or suicide).