Members of Equal Education picketed outside Parliament on Wednesday 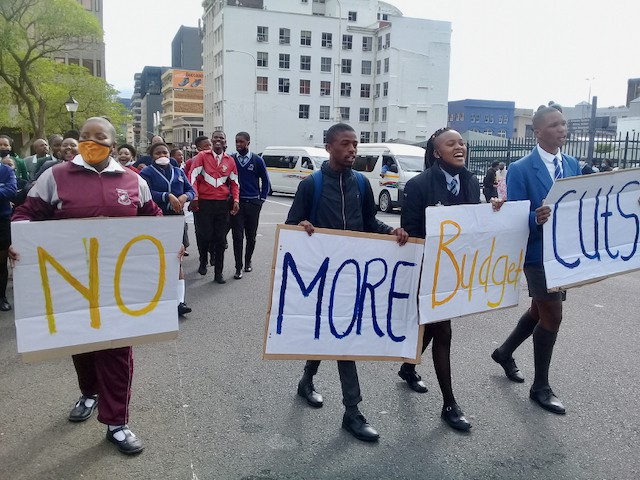 About 50 members of Equal Education (EE) picketed outside Parliament on Wednesday to demand that the Finance Minister Tito Mboweni reverse budget cuts made to the education department earlier this year.

The Supplementary Budget tabled on 24 June showed that R2.1 billion was cut overall from the Department of Basic Education (DBE) budget. A further R1.5 billion was lost across provincial education departments, according to DBE Minister Angie Motshekga in her budget vote speech.

EE said in a statement: “A total of R1.7 billion was cut from school infrastructure grants alone, and a further R4.4 billion has been reallocated within these grants to cover Covid-19 expenses.”

“The consequence is that the right of learners to basic education is compromised.”

Learner members of EE (equalisers), post-school youth members and parents joined the picket. They want more funding to be allocated to basic education, funding for school infrastructure increased, and that the National School Nutrition Programme (NSNP) be allocated enough funding to feed all qualifying learners.

Likhona Mendisi, a 17-year-old equaliser, said, “As poor kids from poor communities, if we don’t get educated, what is the basis of our future?”

“Education is supposed to be a front line department,” he said.

“Many schools have already been forced to use their already overstretched budgets to cover Covid-19 necessities. So they’ve been unable to maintain infrastructure and unable to buy school furniture or even textbooks.”

Wenana said additional funding needs to be allocated towards the National School Nutrition Programme (NSNP) on which over nine million learners are dependent.

“We leave our houses telling ourselves that we’re going to eat at school. But if [Mboweni’s] cutting the budget for feeding, how are we supposed to learn? Because we can’t learn hungry,” said 18-year-old Sibongile Litha Maki.

“We’re tired of hearing this song that the government has no money,” said Daphne Erosi, coordinator at the EE parents’ division. “That R2.1 billion could have been used to fix schools, but it looks like our minister doesn’t take education seriously.”

Public interest law firm SECTION27 announced on Wednesday that it will be admitted as a friend of the court in the Local Division of the Johannesburg High Court in the Mahudu and Others versus Minister of Basic Education and Others case.

The case concerns a matric learner who died in 2017 after being electrocuted by unsafe electrical wiring at Geluksdal Secondary School in Gauteng.

SECTION27 said it aims to strengthen the law that holds public officials accountable for the failure to ensure the school environment is safe. The organisation is currently advocating for safe school sanitation infrastructure, following a number of complaints and queries it received regarding death and injury on school premises.

“It is essential to ensure that school infrastructure meets the minimum benchmarks for school safety and that public officials in every level of the basic education system are held accountable for their obligations to keep children safe,” said the statement.

Next:  Councillor summons municipal officials to respond to shackdwellers’ complaints