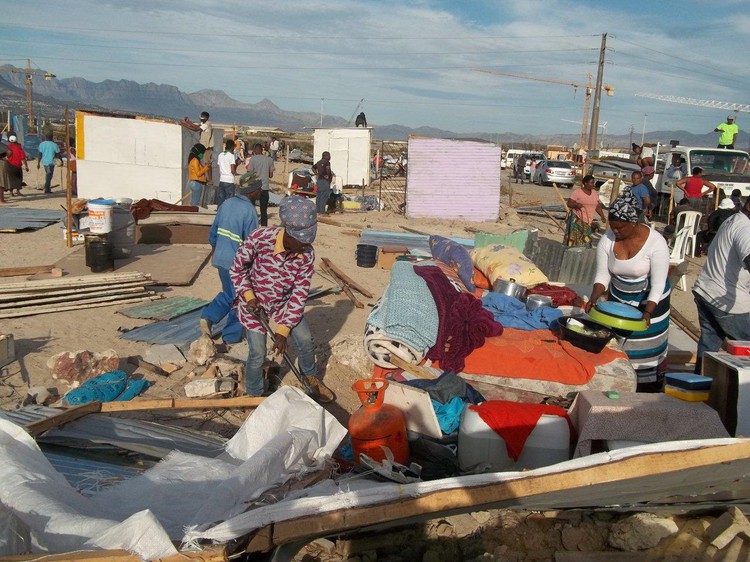 Vulnerable people with little to no access to adequate shelter, let alone decent housing, are occupying land because of the unacceptable conditions they have endured for years in crowded and unsanitary informal settlements or backyard dwellings. Archive photo: Vincent Lali

The outrage over the recent violent eviction of a naked Bulelani Qholani from his shack in eThembeni near Empolweni, Khayelitsha, on 1 July by the City of Cape Town’s Anti-Land Invasion Unit (ALIU), will fade in time. Many more evictions will happen, and the dignity and rights of many more people will be violated if we do not look at the broader picture, and address the root causes of these human rights violations.

City of Cape Town Mayor Dan Plato in a statement on 2 July, reacting to the video of the eviction, said the City did not tolerate the conduct demonstrated by the officers during the eviction, and that they had been suspended pending an investigation.

But the City routinely places ALIU officers in ethically and psychologically difficult situations. They are tasked with following orders that enforce property rights at the expense of constitutional rights to shelter and dignity. The destruction of people’s homes, whether temporary and located on land owned by others, is inherently a violent act. Such a situation brings out the worst in human nature and some officers use unacceptable levels of force. That some of these officers may empathise with the evictees, but are tasked with perpetrating violence on them, appears not to be considered in the Mayor’s or the broader public’s condemnation of the officers.

Vulnerable people with little to no access to adequate shelter, let alone decent housing, are occupying land because of the unacceptable conditions they have endured for years in crowded and unsanitary informal settlements or backyard dwellings.

The State argues that “land invaders” (a pejorative term) must be quickly removed in order to enforce private and state property rights, upholding the “rule of law” and setting a precedent. But what land occupations and the ever growing existing informal settlements represent is a failure by the whole of our society – the state, the private sector, and residents – to address a lack of housing.

Put simply, increased urbanisation is fuelling the growth of informal settlements and land occupations due to the failure of the housing supply to meet the demand, particularly in areas well-located in terms of job opportunities and public facilities.

While urbanisation is caused by a number of factors, a key driver is the lack of economic opportunities in rural municipalities due to a combination of past land dispossession, homeland policies, lack of investment in infrastructure and sustainable development, dysfunctional and corrupt municipal administrations, and the lack of a coordinated and effective national spatial planning response to address this in a holistic way.

Apartheid policies resulted in deliberate underinvestment in urban housing supply. The housing that was built was not of a decent standard in terms of sustainable settlement, social or economic development, and often located on the edge of cities and towns.

Since 1994, the State housing response has mostly reinforced these spatial patterns and dysfunctions, as state-subsidised housing has often been built on the edge of cities and towns where land is cheaper, and the need to build at large scale has resulted in sprawling featureless settlements of identical houses.

In addition, this mode of housing development has failed to account for the fact that many lower income people do not have regular or stable employment which allows them to pay regular rates and utility bills, nor the need for flexibility to move to where economic opportunity arises, or leave cities and towns for the safety of rural social and family networks in times of economic or personal distress. As a result, many housing beneficiaries move back into informal settlements or backyard shacks, in order to live off the rental income from their house. This is also one of the reasons why the impressive scale of state-led housing delivery since 1994 has hardly dented the growth of informal settlements.

Consequently, a large demand exists for affordable transitional forms of housing (such as short-term rental units), a limited number pioneered by social housing associations in Johannesburg and more recently in Cape Town. This type of housing can also cater to those who have been evicted from their current homes (formal or informal) due to gentrification, economic circumstances or, as in the current case, occupying state or private land.

While large scale state-led housing delivery was based on an urgent need to provide adequate housing post-94 (and also an unrealistic but understandable promise made by government to deliver a house to all those without in a relatively short time frame), it has created a culture of dependency. It does not empower people through a degree of involvement and skills transfer in the construction of their own home, which the neglected People’s Housing Process (PHP) policy fosters.

Why is the private sector not more involved in the supply of lower income housing, when the demand is so high, and growing? This is partly due to the large role that the state has made for itself in the delivery of housing, understandable given the great demand for housing post-94, but also to the weak appetite (and lack of shared vision) of the private sector in getting involved in order to the meet this demand.

The complexities of assembling housing subsidies for multiple beneficiaries in a single housing development, and the economics of cross-subsidising social housing with market-rate housing in integrated developments are just two of the obstacles to be overcome.

However, the government can make efforts to reduce the obstacles (“reducing the business risk”) and speed up land release and development processes. Meanwhile the private sector (including the finance sector on which housing development relies) needs to buy into a shared vision by realising that inclusive economic growth, which is underpinned by development that reduces inequality, is the only sustainable way to grow the economy, address our myriad social issues, and foster integration.

We cannot wait a moment longer; the human rights and dignity of millions of our fellow South Africans and the future of our country are at stake.

Jens Horber works as an urban planner, and has a background in the design and NGO sectors, where he has worked in informal settlement research.