“Workers on duty during lockdown must be paid for risk or danger allowance,” says COSATU leader 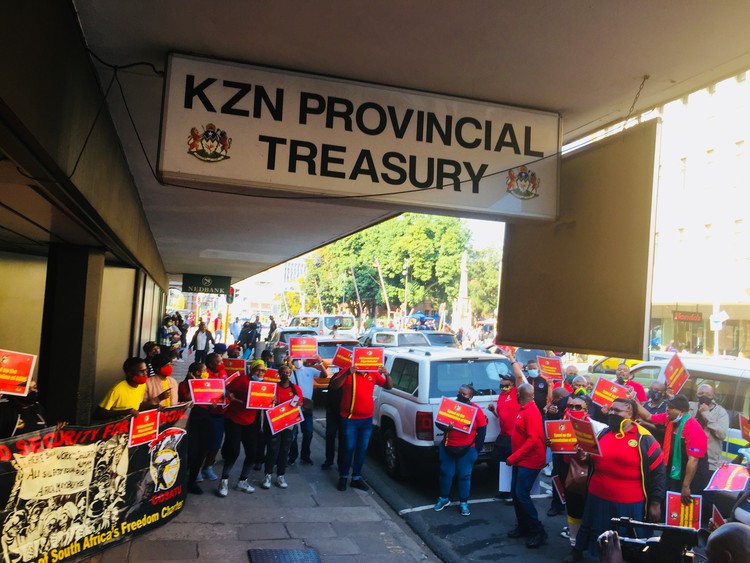 About 100 workers picketed outside the provincial treasury offices in Pietermaritzburg on Friday to demand a salary hike. Photo: Nompendulo Ngubane

“Workers on duty during lockdown must be paid for risk or danger allowance,” said Edwin Mkhize, COSATU’s provincial secretary in KwaZulu-Natal.

He was addressing about 100 workers who picketed outside the provincial treasury offices in Pietermaritzburg on Friday to demand a salary hike and that it be back paid.

Mkhize said that an agreement to increase worker’s salaries was signed with the government in 2018. We have not been able to verify whether an agreement was signed.

“Workers were promised wage increments starting this financial year. They did not get the increase. The government is now singing a different tune, saying workers won’t be receiving what they were promised. We are here to demand that these workers get their money and backpay,” said Mkhize.

He urged that compliance with health and safety protocols at workplaces be regularly monitored. “The provision of quality protective equipment and training of workers should be a priority. Officials and companies who fail to observe health and safe measures for Covid-19 in the workplace will be harshly punished ,” warned Mkhize.

Municipal worker Jabu Sithole said workers feel betrayed. “If government is able to provide unemployed individuals with R350, it shows that there is money. We also work under risky conditions but no one is taking note of that,” said Sithole.

The memorandum was handed to Neli Shezi, head of provincial department of finance. She promised to take workers’ grievances directly to MEC Ravi Pillay, but she reminded workers that responses to demands related to wages “are discussed on a national level”.

Shezi said, “The MEC should have been here to receive the memorandum but he is caught up in another meeting. The matter will be discussed and responded to.”

Next:  Housing crisis more complex than it seems

Previous:  104-year-old woman now has a choice of toilets