They want the government to provide services to their informal settlement but it’s on private land. Nevertheless there is hope that a pending land transfer will change things 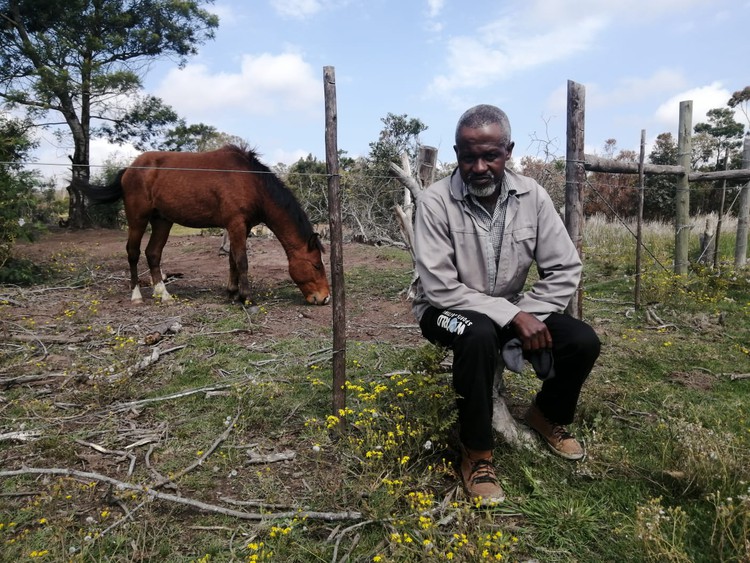 Thabo Nomkhonwana, a resident of Fairview informal settlement in Port Elizabeth has been struggling to make ends meet since he lost his job groom at Dippin Blu Racing earlier this year after a dispute. Photo: Mkhuseli Sizani

“We have to wake up early in the morning to boil water to bath and cook porridge on fire wood for learners,” says Thabo Nomkhonwana, a resident of Fairview informal settlement in Port Elizabeth.

The 61-year-old is a former groom at Dippin Blu Racing. He had worked for the company for nearly ten years before he was fired along with 39 other grooms following a dispute with the owner in February. The workers are currently waiting for the Commission for Conciliation, Mediation and Arbitration to decide their case.

Nomkhonwana lives with his 14-year-old son and has said that since losing his job at the stables earlier this year, they have had to rely on neighbours and relatives who give them something to eat.

“Our place is muddy because there are no storm water pipes. We are forced to wear gumboots at work and home. Most people here have pigs who drink that dirty water and eat human excrement in the bushes where we relieve ourselves. Rubbish is also not collected and goats and cows eat the plastic,” said Nomkhonwana.

Fairview is on land owned by Phumelela Gaming and Leisure which means the municipality cannot set up infrastructure like toilets and electricity. The municipality provides water in Jojo tanks and a mobile clinic that comes once a week. Residents are threatening not to vote if the Nelson Mandela Bay Municipality does not improve their living conditions soon.

Community leader Amos Mntengwana, who has lived in Fairview for more than three decades, said: “For the past three years we have been asking Phumelela to give us ownership of the land in order to get service delivery from the municipality. But Pumelela wants to donate the land directly to us. We have been asked by Phumelela to form a trust in order to get ownership. Even that process has its complications but attorneys are handling it,” he said.

Akhona Dlokolo has lived in the area for ten years. He said: “We are not going to vote because we are not getting services. We have six Jojo tanks but the last time they were filled was in April.

“We share one communal tap which we connected ourselves from a horse stable. Sometimes the tap runs out of water for two days then we are forced to go up and down and ask for water from nearby stables. When the water comes back it becomes a long queue.”

Municipal spokesperson Mamela Ndamase refuted some claims by residents. He said the Jojo tanks were last filled on 19 October. “There is a process underway to acquire land to accommodate all the housing needs in ward 40. The process was delayed and disrupted by the Covid-19 outbreak.”

Peter Naidoo chairperson of the National Grooms Association said: “I have been requesting the transfer of the settlement for almost six years. It has been a long battle full of problems and promises from all concerned.”

Naidoo said that Phumelela was currently under debt rescue which made negotiations more difficult. “I strongly believe that the directors of Phumelela and the government must intervene.”

Phumelela Eastern Cape’s general manager, Luciano Passerini, confirmed that the company was undergoing business rescue. “The business practitioner is dealing with this matter and things are heading in the right direction,” he said.

Next:  1,000 RDP homes substandard and unfinished

Previous:  Is Shamila Batohi winning the battle to fix the NPA?