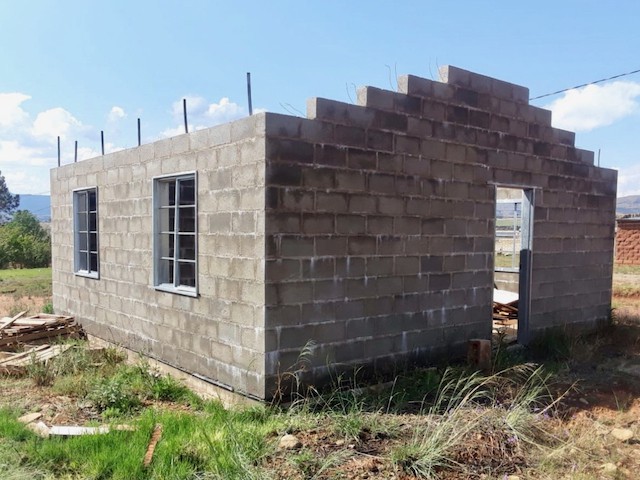 One of 383 RDP houses that have been standing without roofs for three years in Matatiele Jabavu village. Photo: Nombulelo Damba-Hendrik

Over 1,000 RDP house beneficiaries in Jabavu village in Matatiele, Eastern Cape, have been left with unfinished houses after the contractor left three years ago, say residents.

According to provincial Department of Human Settlement spokesperson Masiza Mazizi a R200-million tender to build 1,500 houses was awarded to Isivivana construction and Cort and Fred Consulting Engineers in 2014.

Mazizi said R174 million has been paid so far. A thousand units were completed, another 383 need roofs, 105 are at slab level and 12 not started.

Mazizi said the 1,000 completed units did not meet the National Home Builder Registration Council (NHBRC) required standard. He said the contractor was requested to do some additional work to bring them in line as was required by the NHBRC.

“This was outside the contractors initial scope of work and culminated in a variation order that must be approved by Treasury,” said Mazizi.

He said the department is following all necessary processes to get Treasury’s approval.

Ward 1 Councillor Shumikazi Mzozoyana said that some of the beneficiaries have already received keys from the contractor and have moved in.

Ward 3 Councillor Mdibanisi Mtoto also confirmed that beneficiaries are using the houses. He said he was unaware that the houses did not meet the NHBRC standard. “I saw people moving in after receiving keys from Isivivana construction,” he said.

Makhaliso Motloi from Jabavu, who lives in a two-room mud house with four children, said, “Since 2017 we have been waiting for the department to come and explain to us why the houses were left unfinished … Some said the contractor was not paid and we do not know if that is true or not.”

Her house only has walls.

“If I had money I would buy material to finish it, but I rely only on old age grant … I’m sad as I have had to wake up every day since 2017 seeing this unfinished house. And the sad part is I cannot afford to finish building it,” she said.

Project Engineer Sifiso Sibanyoni denied that the houses did not meet NHBRC standards. He said, “We have been begging [the department] for years to pay us our money and we have now referred the matter to the court.”