Hanover Park resident: “There comes the army, there goes the army”

Nearly nine months after the army was deployed to the Cape Flats, what has changed?

“There comes the army, there goes the army,” says Wilfred McKay, a self-proclaimed reformed gangster. A resident of Hanover Park, McKay was speaking about Tuesday night when the army had been patrolling the streets of the gang-ridden area after 7pm. But as soon they left, the shooting started again, he said.

In July 2019, the South African National Defence Force (SANDF) was deployed to temporarily assist the Western Cape South African Police Service (SAPS) in gang hot spots on the Cape Flats. This came after a spate of violence left 73 dead in one weekend between 31 May and 2 June 2019. In response, the government sent a convoy of heavily armed troops and armoured vehicles to assist SAPS with raids, patrols, searches and roadblocks around these hot spot zones.

The army’s assistance is to be withdrawn at the end of this month.

“There was no change … They had no real purpose. The deployment was a waste of time,” said McKay. He was once a member of the notorious Americans gang for about 20 years. He now volunteers and works with gangsters through upliftment programmes at the First Community Resource Centre (FCRC). McKay said, “All the money spent on the army could have been used for programmes, particularly programmes that could keep kids busy and off the streets.”

The SANDF deployment was meant to end in September but it was extended by President Cyril Ramaphosa until March 2020, costing the country just over R64 million.

The Western Cape has the highest rate of gang violence in South Africa. According to the 2018/19 crime stats, 1,120 murders were linked to gang violence, of which 938 were attributed to the Western Cape. The province also holds four of the top five precincts where the most murders were reported. These include Nyanga, Delft, Khayelitsha and Philippi East, which includes Hanover Park.

Since 2018, a number of Cape Flats communities have participated in “shutdown” protests against gang violence, also by the residents of Hanover Park who blocked off streets in the area. In November 2018, President Ramaphosa launched the Anti-Gang Unit to much fanfare. In June 2019, one month before the army’s deployment, Minister of Police Bheki Cele said that the unit was “not enough”. 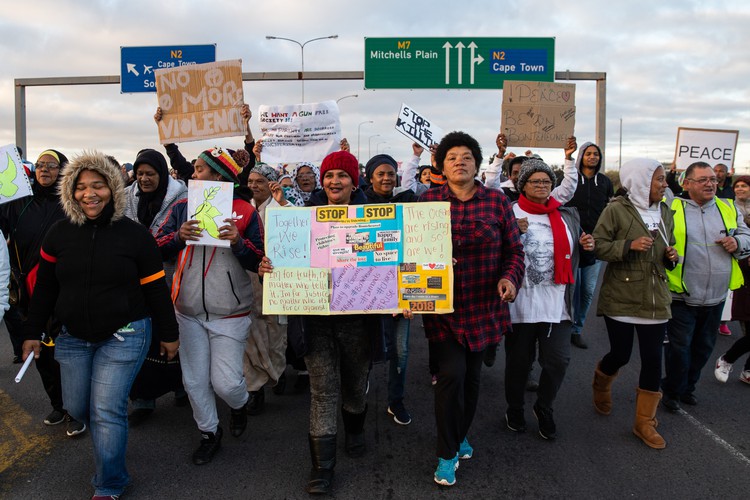 “Nothing has really changed,” said Henrietta Abrahams, a community activist from Bonteheuwel. Abrahams, who led the Bontehuewel protests, said government was ignoring the root cause of gang violence. She said that a lack of jobs, substance abuse, school dropouts and large families living in cramped spaces are the issues that need to be addressed. “Communities need more police resources and better trained police,” she said.

The Social Justice Coalition (SJC) has also been campaigning for better police resources in poorer communities for years. In June 2019, protesters camped outside the SAPS Western Cape Provincial Head Office demanding, among other things, that police resources be relocated.

Albert Fritz, Provincial Minister of Community Safety, said, “To ensure that a vacuum is not created when the SANDF withdraws its troops, the Western Cape Government will continue to roll out its safety plan. This includes the deployment of additional law enforcement officers and the rollout of numerous violence prevention programmes in communities most affected by crime.”

Measuring the success of the army’s deployment is difficult, but the release of the 2019/20 crime stats could show an indication of its effectiveness.

Next:  Hospital general staff down tools

Previous:  Pensioner helps himself and his neighbourhood by recycling from illegal dumps