“We grew up knowing that we must respect the dead. What is happening here is heartless” says widower 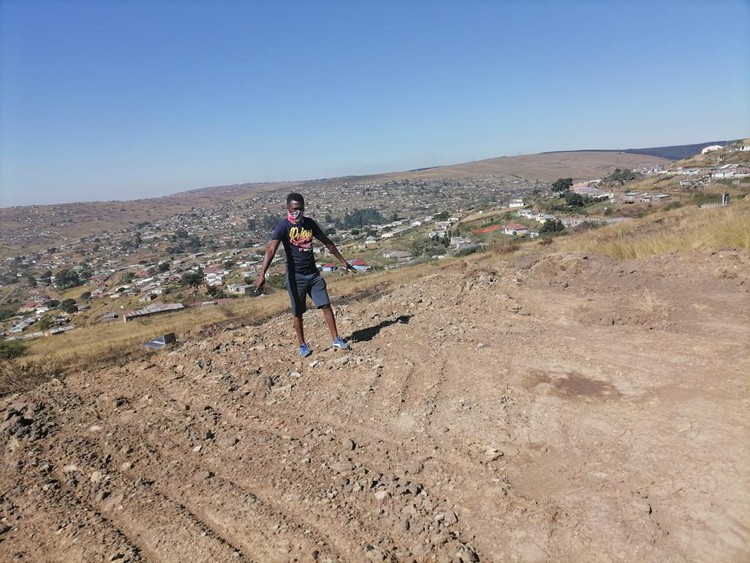 Skhanyiso Zuma from Pata location, Pietermaritzburg, shows where his father’s grave stone once stood before it was removed and cleared by people who intend occupying the cemetery. Photo: Nompendulo Ngubane

The community of Azalea in Pietermaritzburg are calling for the Msunduzi municipality to intervene after a group began clearing graves and occupying sites in the local cemetery.

Residents claim that plots in the cemetery are being sold illegally to people from Hammarsdale and Richmond for around R30,000, depending on the size. GroundUp has not found proof of such sales, but did see demarcated sites at the cemetery.

We saw several people checking on their families’ graves.

Skhanyiso Zuma, from Pata location, said he was shocked when he visited his father’s grave a few weeks ago and discovered that it was demolished and a plot had been marked out over it.

He said, “The selling of the land started during the hard lockdown last year. While people were staying at home, the land was being sold. It became worrying because we would see tractors busy.”

“How can you buy a site in a cemetery? Even if you are not from this area, it is clear that this is a grave site. There are graves everywhere,” said Zuma.

He said, “I am a traditional man who believes that visiting a grave is my culture … My father’s grave is no longer there. I can’t show my children the grave because it doesn’t exist now. This is heartbreaking … People are invading the graves of our ancestors and it is unacceptable.”

Bernard Mtolo said that a site has been marked out near his wife’s grave. She died in 1995 after giving birth to their twins.

“Those selling the land of the dead are greedy for money,” he said. “The whole grave site is being invaded and it’s escalating. We grew up knowing that we must respect the dead. What is happening here is heartless. The community must work together to put a stop to this inhuman behaviour,” said Mtolo.

Mafumbatha urged residents with information about the occupation to immediately alert the municipality. “We can even go as far as opening a criminal case with the help of our legal team. We have to inform our legal section to facilitate a process of applying for a court order regarding this area,” said Mafumbatha.

Willowfontein ward councillor Thabiso Molefe (ANC) said, “I wrote a letter to the municipality reporting what is happening there. People who are trading the land are doing it on their own. It is barbaric. They are not sent by any ward councillor or any ward committee. I need to make that clear.”

Next:  PRASA loses application for leave to appeal reinstating executives