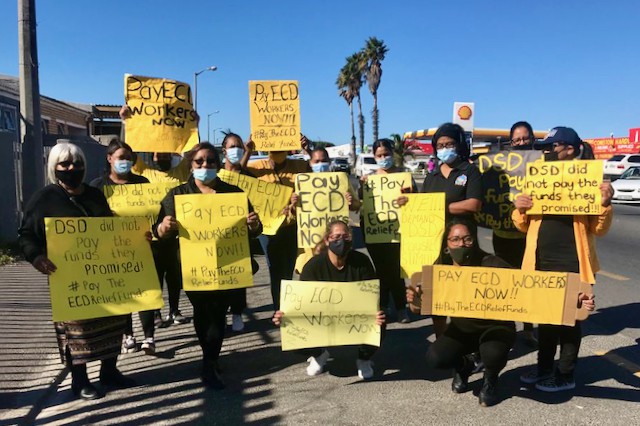 The early childhood development sector embarked on a three-day national protest on Wednesday over what they say is the “appalling and virtually non-existent roll out of the employment stimulus relief fund”.

According to the Centre for Early Childhood Development (CEDC) the department promised to pay over 100,000 workers R4,186 each. But “DSD missed the deadline to pay ECD principals, managers, teachers, cooks and other staff by 31 March 2021”, the centre said in a statement.

“ECD workers have spent money to get this financial support from DSD, but over 80,000 ECD workers are still waiting for this money and are in desperate need of immediate payment. It is now a month and a half late. This is unacceptable,” said the statement.

But the department has said that the payement delay was largely due to a number of errors where applicants either incorrectly captured the identity numbers of their staff or provided incorrect banking information.

Department spokesperson Lumka Oliphant said, “When the DSD introduced the ESRF [employment stimulus relief fund], we noted with great concern at how informal the sector really was, wherein most had no banking details, and no proper records of staff … especially given the number of non-profit organisations that work with and support the ECD sector.”

“The Department made a number of concessions to accommodate the ECD sector and introduced a number of initiatives to provide support.”

“The Department cannot disburse funds to ECD services without being able to verify that the ECD service exists; the staff employed have valid identity numbers; and the bank account … is not a private bank account and is verified to exist in the name of the service,” said Oliphant.

“This status update is in direct response to the current nationwide protests. It is packed with half-truths. Why did they (DSD) not communicate this information prior? They are trying to save face and it carries no value to the fact that thousands of vulnerable women are waiting for the money.

“They (DSD) lacked planning in paying this money earmarked in October 2020,” said Horsewell-Daniels.

Oliphant said, “The Department issued eight media statements and the Minister had a press briefing in Cape Town on the 29 March 2021 to further ensure that we constantly provide status updates and guidance to the ECD sector, the last being issued on the 16 April 2021.”

With regards to missing the 31 March deadline for payments, Oliphant said that when the financial year ended on 31 March, no further payments could be made.

However, all ECD services that had applied and met the criteria for the fund prior to the closing date would start to receive their payments within the next few weeks.

Next:  Graves “desecrated” for land occupation in Pietermaritzburg