Government says Makhado water scheme will be finished next year. But residents have heard this before 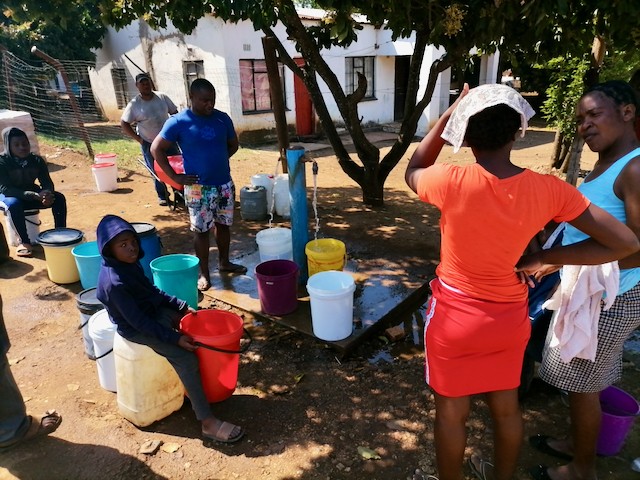 Tshikota residents in Limpopo queue for water most days as their taps are usually dry. There are three boreholes for over 7,000 people. Photo: Bernard Chiguvare

Now residents of Louis Trichardt and surrounding villages are calling on the Department of Water and Sanitation (DWS) to act with urgency in view of constant water problems in the area.

The project is an extension of the bulk water supply from Valdesia to Mowkop in Makhado and is expected to increase the water supply to 39 villages west of Louis Trichardt, Louis Trichardt itself, and Tshikota. It includes pipelines and a reservoir.

Mamikie Moloto, Limpopo DWS spokesperson, says March 2023 is now the estimated date of completion. She also says that over 90% of the work has been done.

Moloto says the contractor appointed to install pumps and electrify the pump station “had challenges” in delivering.

Moses Thovhakale, chairperson of the Sinthumule-Kutuma Development Forum, said some families now get their water from other residents who have boreholes. They pay R300 for a tap and R370 a month for water from the private supplier. This amount is out of reach for many who depend on grants, such as the R350 Social Relief of Distress grant, he said. Also, the private suppliers shut off the water from 6pm to 7am.

The forum is now threatening a total shutdown of Makhado in protest.

Elize Fourche, general manager of Steers Debonairs in Burger Street, Louis Trichardt, said, “Every time we do not have water, I have to drive to some community nearby to buy water.” She said sometimes when the restaurant is stuck without water to cook chicken, she sells uncooked chicken at a special price.

In Tshikota township, people wake up early to queue for water at three boreholes drilled by Coca-Cola Beverages in 2019. Most of the time taps are dry for the township’s 7,000 residents.

The South African National Civic Organisation (SANCO) Tshikota branch secretary Thabang Tlou said, “The three boreholes cannot adequately supply water to the Tshikota population … We are calling DWS to investigate why this project is not yet completed.”

Next:  No light at the end of the tender for Eastern Cape villages