Ethics committee urged to act against MPs over PRASA collapse 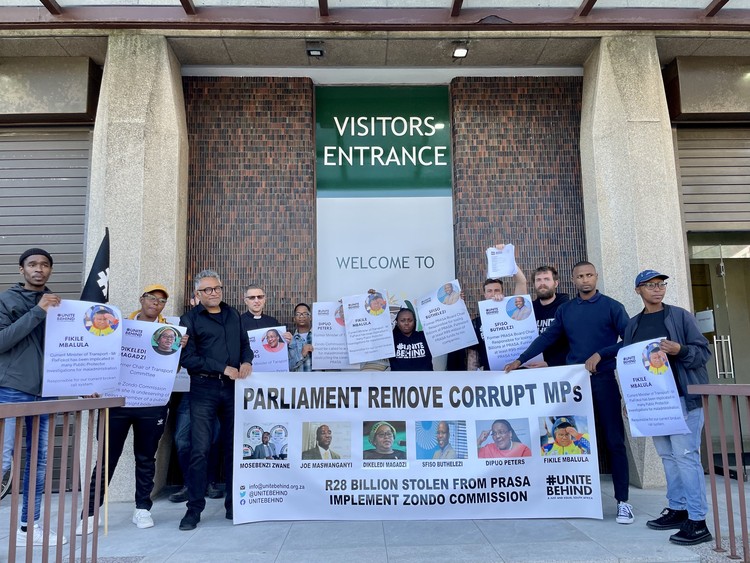 Members and supporters of #UniteBehind outside Parliament, where they handed over an official complaint to the Joint Committee on Ethics and Members’ Interests. Photo: James Stent

Members and supporters of commuter activist group #UniteBehind laid a complaint at Parliament against six MPs, including transport minister Fikile Mbalula, on Wednesday. They say the MPs have led to the collapse of the Passenger Rail Agency of South Africa (PRASA), and must be held to account.

#UniteBehind wants the Joint Committee on Ethics and Members’ Interests to summon the six MPs to account for their involvement in PRASA’s “slide into almost total ruin”. They want the committee to take disciplinary action against the MPs, and to suspend or expel them from serving as MPs.

The six MPs are:

#UniteBehind says that these MPs have “through their acts and omissions … facilitated and enabled state capture and corruption through a failure of their ethical and legal duties of care”. They say that Sfiso Buthelezi in particular, currently chairperson of the Standing Committee on Appropriations, directly benefited from corruption at PRASA.

“It’s just not working for us, and we as commuters need to take charge,” said Sheila Arendse, a commuter and supporter of #UniteBehind.

“We have a committee that’s supposed to hold MPs accountable, but they’re not doing their job. Sometimes they’re doing the opposite – going out of their way not to hold the MPs accountable. The sad irony is that now we’re having to watch the watchdog body,” said Reverend Alan Storey.

At Parliament, #UniteBehind handed over their formal complaint to Collen Mahlangu, a procedural advisor at the National Assembly, who was to pass it along to the Speaker of the National Assembly, Nosiviwe Mapisa-Nqakula, and Moji Moshodi and Qhude Nkosi, the co-chairs of the Joint Committee on Ethics and Members’ Interests.

#UniteBehind’s complaint, a 46-page affidavit deposed by Zackie Achmat, refers to President Cyril Ramaphosa’s 24 June letter to the Ethics Committee, which urged it to engage with the recommendations of the State Capture Report (Zondo Report) immediately, and not to wait for the President to issue a plan.

According to Achmat, #UniteBehind’s complaint draws on a mass of evidence of criminality at PRASA that has been perpetrated and enabled by these MPs, including from the Zondo Report, the Public Protector’s reports, investigations by law firm Werksmans and judgments in cases such as Swifambo and Siyangena, as well as #UniteBehind’s own work.

“It’s sad that we’re having to force this body to do its job,” said Zukiswa Vuka, of #UniteBehind. She said that despite the “encouraging” arrests of former Transnet executives Anoj Singh and Brian Molefe, more should be done to get back the money from those responsible for looting state coffers.

“It’s a painful thing to do, to go to Parliament, and to demand that people who belong to a party that I spent many years in should be arrested, should be charged, and should be expelled from Parliament,” said Achmat.

“Parliament cannot dodge its responsibilities,” he said, giving the Ethics Committee 30 days to respond to #UniteBehind.

Next:  Government says Makhado water scheme will be finished next year. But residents have heard this before