Covid-19: To get inside SASSA offices you must sleep outside, says grant applicant 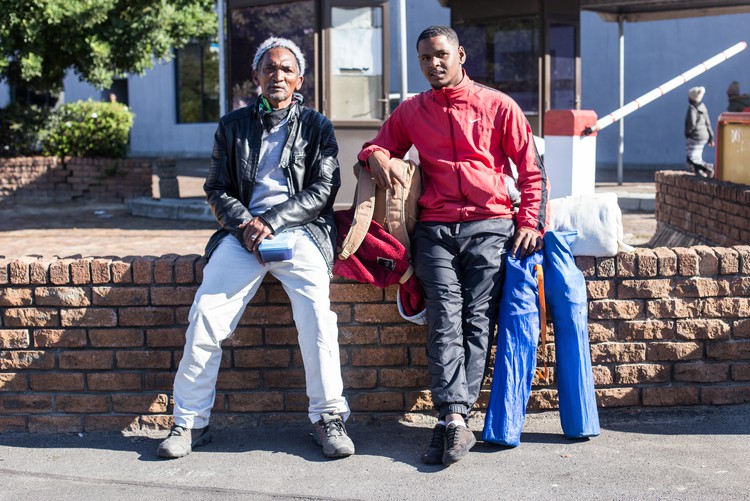 Waleed Daniels (left) and Tyrese van Rooyen both spent the night in an alleyway outside the SASSA offices in Bellville this week. Van Rooyen, whose wife was applying for a grant, brought along camping chairs and a tent. He said more than 60 people had spent the night there. There are no sanitation facilities. Photo: Ashraf Hendricks

Waleed Daniels came to the Bellville offices of the South African Social Security Agency (SASSA) in Cape Town at 7pm on Wednesday night. He was served after 9am on Thursday morning. He is 64 years old and was applying for a disability grant.

Daniels said that he spent the night shivering in the cold and did not sleep. This was not the first time he had spent the night outside the Bellville SASSA offices and he was one of many applicants who did so.

With the move to level three lockdown, SASSA said in a statement on 25 May that it would be fully operational which should speed up the provision of services which had been slowed during lockdown levels five and four. But there were still dozens of people sleeping outside the Bellville offices on Wednesday night, said Tyrese Van Rooyen who spent the night outside with his wife who was applying for a disability grant. When Groundup spoke to Van Rooyen around midday, his wife still had not come out of the SASSA offices.

Van Rooyen and his wife brought a tent and camping chairs along. They slept in an alleyway opposite the SASSA office, along with more than 60 other people, he said. From Bishop Lavis, Van Rooyen said, it costs the couple R100 to travel to these offices and home again, each time.

Daniels did manage to get some of his papers sorted on Thursday, but he will have to come back again. He doesn’t know where to get the money for these trips. “Where must I get taxi fare? I am a pensioner.” It costs him R26 per trip.

To get inside, “you must sleep on the streets,” said Van Rooyen.

At SASSA offices around the country, applicants and beneficiaries have been queuing through the night, in the hope of being served the next day. SASSA has been operating with a third of its usual staff, during levels five and four of the lockdown, and GroundUp has reported on people sleeping outside SASSA offices in Long Street, Cape Town (some of them for two days), in Mdantsane and in Khayelitsha. In Pietermaritzburg, some beneficiaries slept outside Langalibalele post office to collect their grants. In East London, hundreds of beneficiaries were turned away last month, some of whom had queued since 2am. In some of these snaking lines and overnight stays, there was little evidence of physical distancing being implemented by SASSA officials, though many people in the queues wore masks.

Eastern Cape Department of Social Development spokesperson, Gcobani Maswana, said the department was aware of the people who slept outside the Mdantsane offices. He said police had been dispatched “for the safety of the beneficiaries”, and the department was ensuring that beneficiaries receive their grants “in a dignified and respectful manner”. He said chairs had been organised, ensuring compliance with social distancing regulations. “Our elders can not be left alone to sort themselves during this time of Covid-19,” he said.

Asked whether SASSA was aware of the pensioners who slept outside the post office in Pietermaritzburg, KwaZulu-Natal SASSA spokesperson Sandy Godlwana said the agency had received reports of “people flocking into our offices on days not designated for specific grants”.

Social grant payments had been staggered to avoid an influx at paypoints and beneficiaries could access their grants through ATMs, the post office and some stores.

“We reiterate that beneficiaries can access their grants at any time of the month once it has been deposited. There is no need to withdraw your grant on the first day.”

Western Cape SASSA spokesperson Shivani Wahab also referred to the staggering of grant payments to “avoid a high influx and overcrowding at contact points”. She said general queries were being handled through the call centre and the Covid-19 social relief of distress grant applications were processed electronically.

But despite these measures, she said, some SASSA offices still experienced a high demand for services.

Wahab said SASSA was trying to discourage applicants from sleeping outside the offices.

“The provision of tents and blankets to members of the public however will further exacerbate the current challenge of sleep-overs at Sassa local offices. SASSA is making a concerted effort, in collaboration with other government stakeholders, to mitigate sleep-overs at any SASSA contact point,” she told GroundUp.

Nandi Mosia, SASSA Gauteng spokesperson, told GroundUp that instead of providing blankets or shelter to those who slept outside, SASSA had opted for “beneficiary education” to discourage them from sleeping outside. Mosia said SASSA had asked landlords and security guards at its premises to help spread the message that it is not necessary and is unsafe to sleep outside SASSA offices. SASSA officials had been sent to malls which were hotspots for long lines to enforce social distancing, and malls had played their part by providing chairs, she said.

Previous:  Zoom can be used to negotiate retrenchments