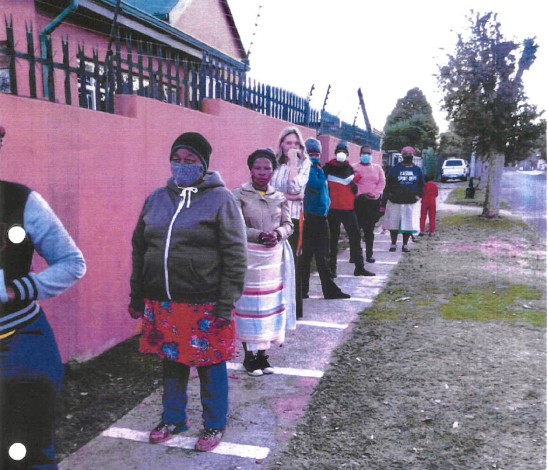 People queue for food in Krugersdorp. Photo from court documents

Peanut butter sandwiches are back on the menu for hundreds of hungry people in need in Krugersdorp West.

Faced with an urgent court action brought by NPO Cradle of Hope, the Gauteng provincial government has withdrawn its “guidelines” which effectively banned the distribution of food, unless done by one of its own agencies.

Cradle of Hope and other charitable organisations went to court saying the need for food among poor people was increasing daily, but regulations had prohibited them from helping.

With the court action set down for 2 June, Gauteng’s social development department late last week issued a statement “withdrawing” its guidelines after “extensive engagement with the Premier’s Office” about the challenges raised by the organisations over distributing food.

In a practice note filed with the Pretoria High Court, it is recorded that the matter has been settled, the case withdrawn, and that the government is to pay Cradle of Hope’s costs.

In a posting on its Facebook page, the organisation said it was celebrating by providing the community with fresh, warm chicken and vegetable soup: “Many of us were literally in tears as the recipients received their first decent food in almost three weeks. Some of the people came back for more food, four times. That is how hungry they were.”

It said its peanut butter sandwich distribution, to about 600 people, including many children, would restart immediately.

“We have been through very deep waters during the past couple of weeks, with preparations to lodge the urgent High Court appeal to stop the enforcing of the ridiculous regulations re food distribution, and we are all physically and emotionally completely exhausted,” it said.