Four children died after eating toxic food from this dumpsite. A year later, it has not been cleared 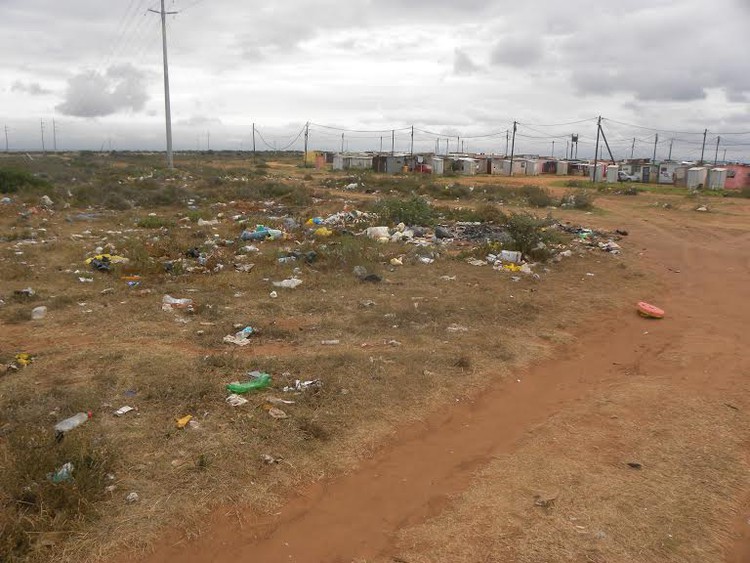 The dumpsite near the Rhwayibana home has still not been cleared. Photo: Joseph Chirume

More than a year after four children died after eating toxic food from a Port Elizabeth dumpsite, the site has still not been cleared.

Asive Rhwayibana, 11, Alizwa Rhwayibana, 5, Alunamda Mqawu, 3, and Zintle Mqawu, 10, died on 5 January 2020. The dumpsite is about 100 metres from their shack homes in NU30, Motherwell. Residents blamed the municipality for the deaths accusing it of failing to provide a secure dumpsite in the area. They also said the municipality should build playing grounds for children to use. The municipality in turn blamed residents for illegal dumping.

A few days later, municipal trucks cleared all the dumpsites in NU30.

But the mother of Asive and Alizwa, Nomthandazo Rhwayibana, said then that she feared that dumping would continue even after the clearing of the site, because no skip or refuse bags had been provided.

And when GroundUp visited the site last week, the dumpsite had still not been cleared away or fenced off.

Rhwayibana said: “It is the municipality’s failure to provide a secure dumping place that caused all this. Had there been a skip bin or had the site been fenced, children could not have accessed it. Another issue is that they resettled us in a place with no playgrounds for children.”

A resident who did not want to be named said the municipality should fence off the area “or convert it into a playing ground in commemoration of the four dead children”.

But Rhwayibana said: “They cleared it once and never came again. They are lying if they say they are supplying us with refuse bags.”

In March 2020, Executive Mayor Marlon Daniels said he had set aside R4 million to clear all illegal dumping sites in the metro. Attempts this week to get comment on the use of the promised R4 million were unsuccessful: emails and follow up calls to Ndamase, on Monday, Tuesday and Wednesday went unanswered.

Motherwell Cluster police spokesperson Captain Andre Beetge said the toxicology results of examinations of the four children had not yet been received. “We are still waiting for the Cape Town based laboratory to release them.”

Next:  Activists demand transparency over Covid-19 vaccine roll out

Previous:  No water, no sanitation, no electricity, but for these families this is “Paradise”