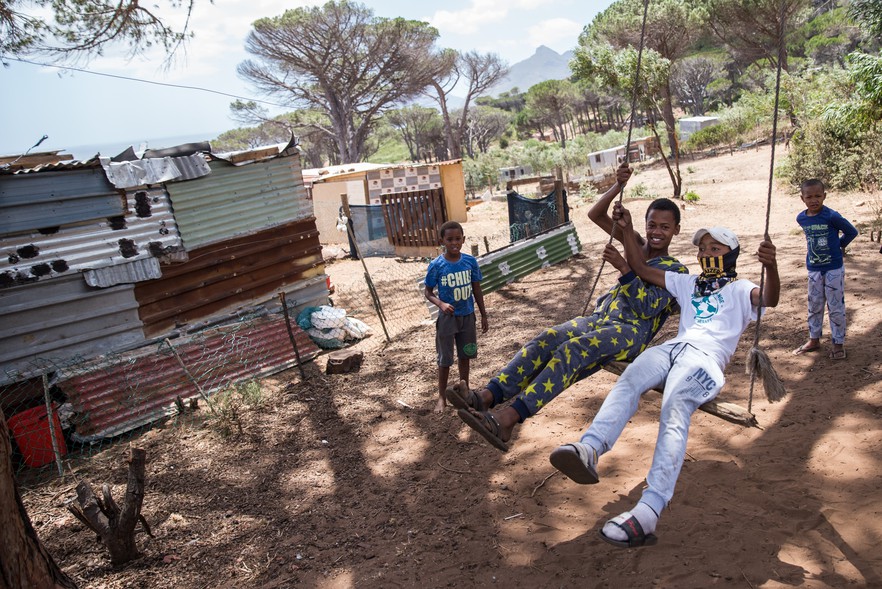 Regen Abrahams, 15, and Liano Lawrence, 12, play on a makeshift swing in “Paradise”, where about 20 families live on the mountains. Photos: Ashraf Hendricks

For the 20 families living there, their little piece of mountainside in Kommetjie is “Paradise”. Though there is no running water, no sanitation, no electricity, and they are constantly harassed by baboons, many say even if they had money they would not move. Now, though, they might have to: the trust which owns the land hopes to put up a housing development.

Over the last year, the population of the 15.4 hectare piece of undeveloped land next to Ocean View has slowly grown from two to about 20 families. The land, owned by the Ocean View Development Trust, has been untouched for more than 20 years. Many of those living here are single mothers who were previously backyard dwellers.

There is no water or sanitation or electricity. But many of the residents have come to appreciate the open space and relative safety when compared to the gunshots echoing from the nearby. So much so, that even if their financial situation improves, they say, some would still prefer not moving back to what they call “the system”.

As a child, 36-year-old Bernadette Rossouw played on the very piece of land she now lives on. Back then, she already called it “Paradise”. “I came to catch tadpoles and take them home,” she says.

Erf 5144, to give “Paradise” its official name, was donated to the Trust in 2010 by the Kompanjiestuin Development Company. The objective was that the land would be used for housing and other opportunities for the greater Ocean View community.

Tired of living as a backyarder, Rossouw moved onto the land with her four children at the end of January 2020. A single mother, she says that it was “desperation” that led her to move. Otherwise, she said, she “would have been on the street”. 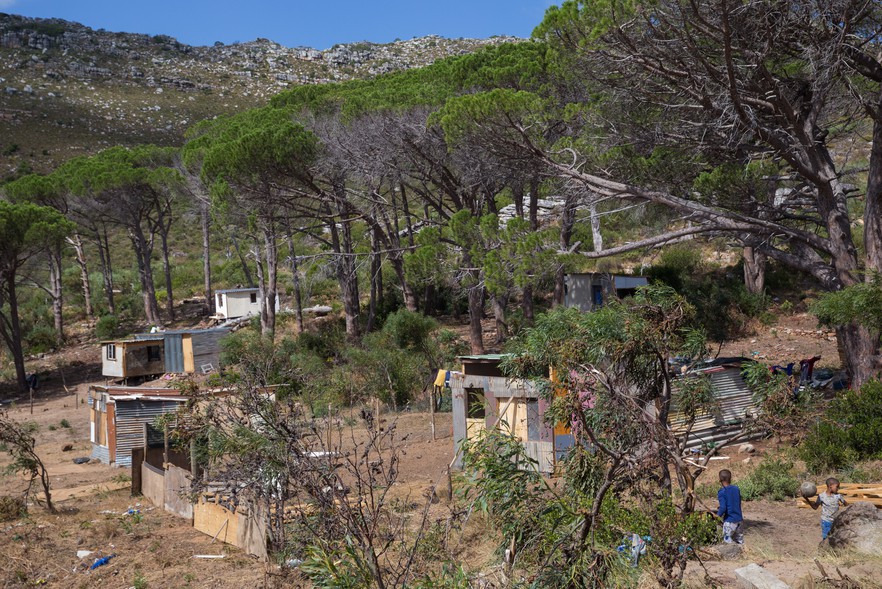 The 15.4 hectare piece of land has no running water, electricity or sanitation.

At the time there were only two families in two cabins, though Rossouw says Rastas have been staying on these mountains for a long time. She spent R3,500 to put up her house. Since then, she says, it has been knocked down by Law Enforcement officials four times. This is her fifth home, which she has been staying in since July with her three children and pets.

She says that she loves this community and would like to turn it into an eco-village with sustainable vegetable gardens and a park for the children. “We want to sustain ourselves,” she says.

Peter Dick and his family were forcibly removed under apartheid from Simonstown to Ocean View when he was 21. Today he is the chairperson of the trust, of which he has been part since its inception in 1990. The 15.4 hectare land provides a major opportunity for the Ocean View community, he says, where there are currently no housing options.

“We wanted to create an opportunity for the middle income category,” he says. This would include those that earn more than R3,500 and are disqualified from state subsidies but battle to get home loans from banks. The development would create jobs and the profits from the development would go back into the broader community, says Dick. 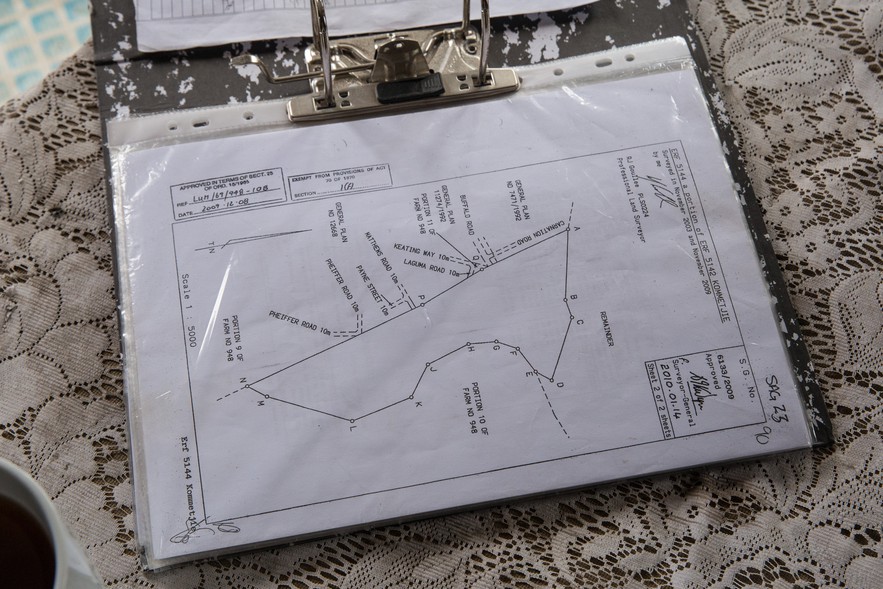 The land is owned by the Ocean View Development Trust, which plans to build about 200 homes and use the proceeds from the project for the Ocean View community.

Families from Ocean View would have first option on 30% of the roughly 200 homes to be built. Plans have been finalised for 50 square metre 2-bedroom units which have an open plan kitchen and cost from R699,500. The land is described as “enjoying panoramic ocean and mountain views of Noordhoek Beach and Dungeons at Hout Bay”.

Dick says that the families living on the land are jeopardising the project. He says that he has explained the situation to them, but they have refused to move. “I don’t know what to do.”

Another issue is that when the land was transferred, the City of Cape Town started billing the Trust for rates and levies. Today Dick says that they owe the City over R1.3 million and if they can’t pay, the land could be repossessed. The City confirmed that the Trust owes “under an amount of R1.3 million” and said legal action had been “put on hold based on discussions that have taken place with the City”. 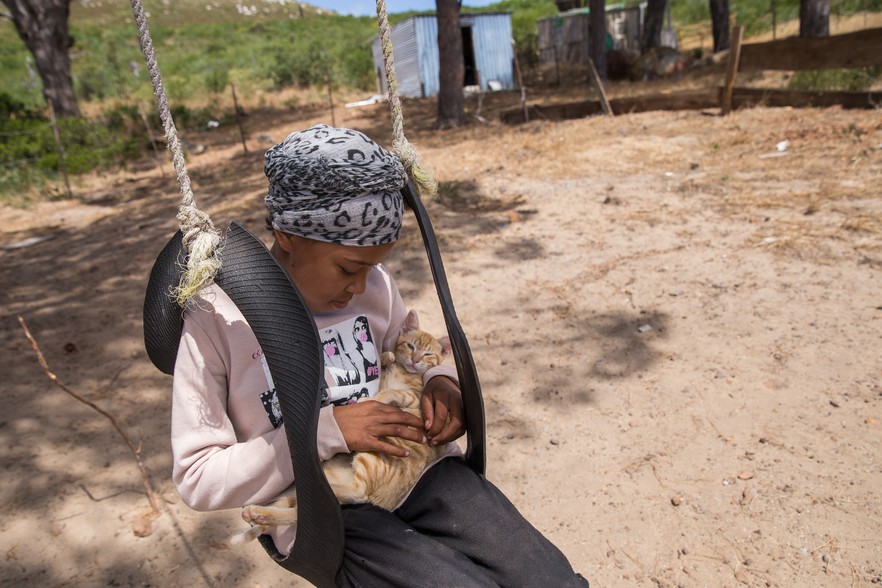 Levona Claasen’s daughter Fagmiyah spends time with a cat on one of the swings. 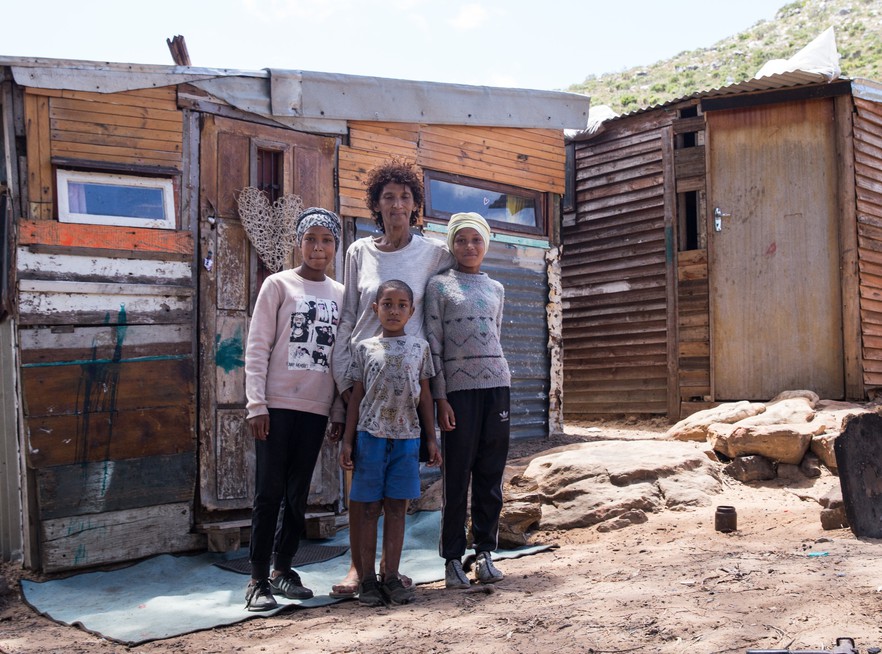 Levona Claasen and her children: Fagmiyah, 12, Sa-uud, 7, and Qiulsum, 10. The family has been on the land for more than nine years.

Levona Claasen, who moved in with her three children more than nine years ago, wishes she could stay here her whole life. The children all attend the nearby school and her brother also lives with them. A single mother, she doesn’t have any income and is surviving on her social grant.

When Claasen first moved in, she recalled having trouble with Law Enforcement officials wanting to evict her. “They wanted to drive us out off the mountain,” she says. When they arrived, she says, she pleaded with them, “Where must I go with these two children and this little baby boy? On the street?” She says that she hasn’t had any problems since then.

Claasen doesn’t mind the lack of electricity or water. Asked about sanitation, she laughed. “We go catch a tree or something,” she said.

“It’s very nice up here,” says Claasen. “I won‘t trade this place to go stay down in the system.”

This is a place where you can relax, but when the baboons come … you can’t,” she says laughing. 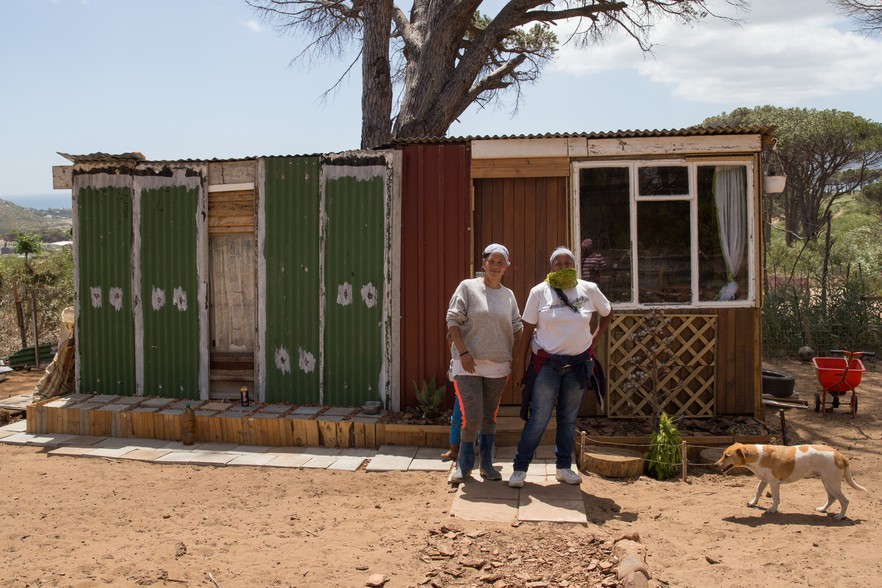 Natasha Laurence and her sister Liezel both moved onto the land a few months ago. They live in separate houses.

For over 20 years, Natasha Laurence lived in other people’s backyards. “I just had enough of staying in other people’s yards because I have my own family,” she says. She has five children, four of whom live with her.

As a child, she lived in a cramped apartment with about 14 family members in Hanover Park. Compared to that, she says, where she lives now there is peace, quiet and space.

“When children don’t have space there is a lot of fighting,” she says. Even if she had the money, Laurence doesn’t see herself moving back to the Cape Flats.

“There’s no gangsterism here. There’s no shooting. There’s no drugs happening here. So that is very important for the boys.” says Laurence. “There is just something about this atmosphere here. It’s something else,” she says, beaming. 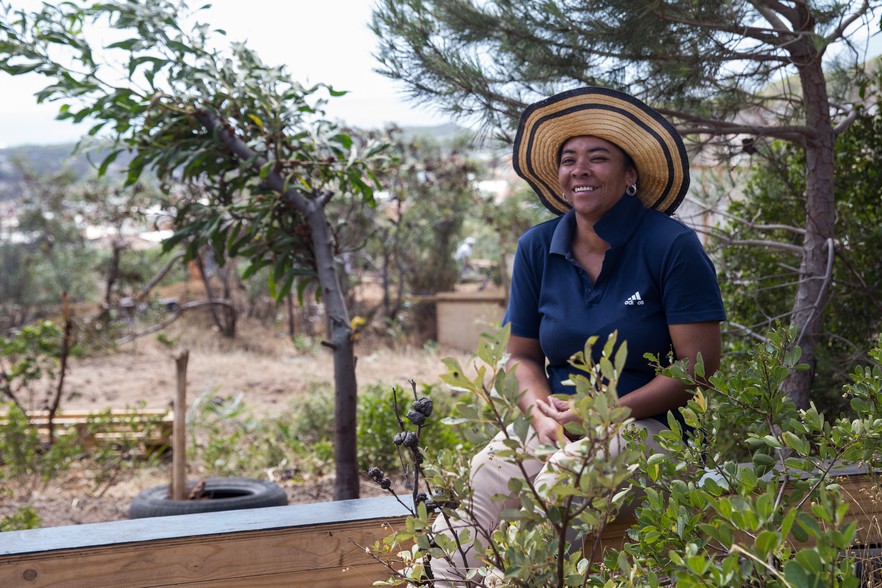 Wagieda Baker moved in at the end of October. She said that she had “enough” of living as a backyarder.

Wagieda Baker moved in at the end of October with her 18-year-old son and her six-year-old. Before, they were staying as backyarders. “I just decided that I had enough,” she says.

Baker says that she loves the freedom. “You don’t get restricted,” she says. Law Enforcement officials have come around, but she is not concerned about being evicted. “I live one day at a time.” She has no job and no social grant at present. When she struggles, she says, “I ask for help”. 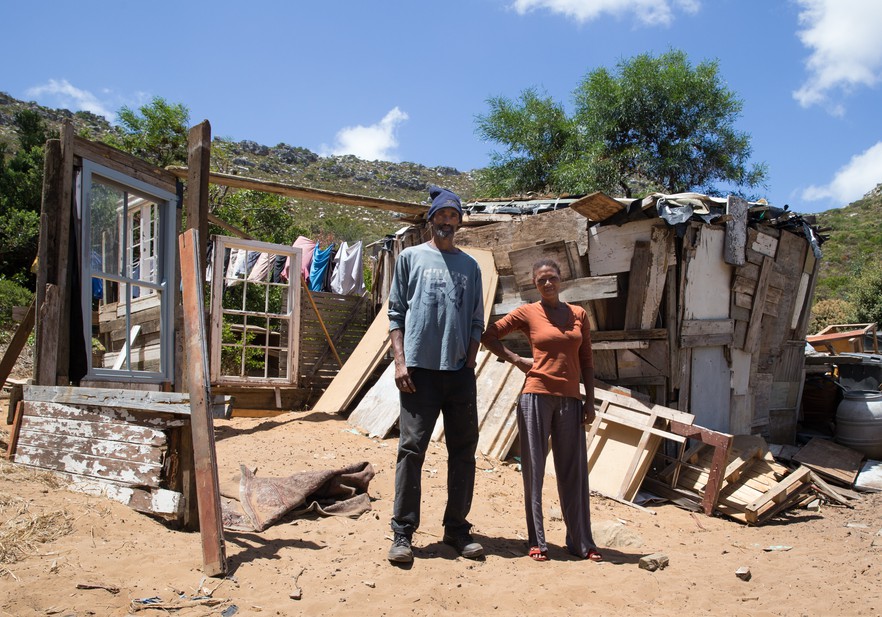 Wilhelmina Williams and her partner Vernon Traut have been on the land for more than 15 years.

Wilhelmina Williams and her partner Vernon Traut have been staying here for more than 15 years after leaving her father’s home in Ocean View. “The bush is for everyone,” she says.

Both do occasional contract work such as street cleaning for the City of Cape Town. Williams says even if she could afford it she would not move back into a flat in Ocean View.

“I’m occupying land that has always been here, that doesn’t have an owner,” says Rossouw. “I don’t see myself being here illegally.”

From the mountains, she says, gunshots can be heard during the day and at night.

In Ocean View, she says, “our children are becoming gangsters”. “We send our kids to the shop and we worry.” She no longer wants to be part of that and she does not want to be forced to live in cramped spaces, she says.

“I don’t want my children to only know the system. There’s different ways, and it should be my choice.”

“So I’m here and I don’t intend going anywhere.” 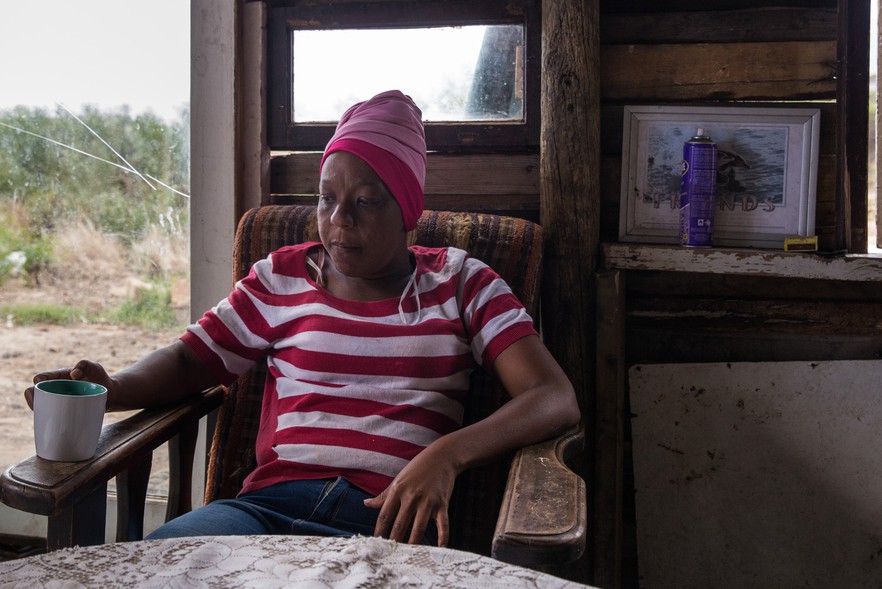 Bernadette Rossouw has been evicted four times since moving onto the land in January 2020.

Next:  Four children died after eating toxic food from this dumpsite. A year later, it has not been cleared