Farmers, miners and immigrants battle for land at old Vlakfontein mine

Moses Skosana, 68, has a piece of land he uses for livestock and small scale farming on the grounds of the old Vlakfontein mine compound, near Tsakane in Brakpan, Gauteng. Although Skosana has been on the land for eight years, he has has no title deed or lease agreement.

In recent years, other South Africans have arrived with livestock. There are also people from Lesotho and Mozambique who keep their animals on the land, and there are informal miners wanting to dig the old mine for gold.

Skosana says he approached the Brakpan Municipality to formalise his occupation back in 2011. “Some people from the City of Ekurhuleni came to inspect the land. They gave me permission to start my farming project. They said l would get title deeds or a lease agreement for all the 15 hectares of land surrounding the compound … I was even given a stand number for the land. It is 8936, Vlakfontein Langaville, 1550. At some point we even heard that the land was on sale, but we don’t know how that ended.”

He went on to register a co-operative with four of his friends for the project: Sikhona Farming. They partitioned the old compound into units for livestock. They have been keeping pigs, chickens and goats. In total they have over 60 animals. They also grow and sell potatoes, spinach, cabbages, tomatoes, butternuts and onions.

“People do not even bother to ask me for permission when they occupy the land. They think l am lying when l tell them that the municipality gave me the land,” says Skosana. “At one point another man came right inside my compound intending to occupy it. I had to ask police to remove him … [But]] how can l chase away people from the land when l do not have proof of owning it?”

Skosana had hoped to bring his family to stay on the compound and build a house. But without a title deed, he has been reluctant. His family live in Langaville extension 6 informal settlement in Tsakane. He has been waiting for a house since 2004.

“I am now getting old. I thought the land would be an inheritance for my children one day, to carry on the farming project,” says Skosana.

Meanwhile the newer arrivals say they need a place to farm. Sipho Xaba, 51, occupied the land two years ago for his chickens and pigs. He depends on farming to survive.

“Farming was my only hope when l could not find work. Word was going around that the land here at Vlakfontein was vacant for anyone who wants to farm. That is how l came here,” says Xaba, who lives in an RDP house in Langaville. “Sometimes l sell my pigs and chickens at an auction. But of late the rates are very low. I was hoping to get funding from government for my project.”

Xaba thinks government should allocate him and the other farmers a permanent place. 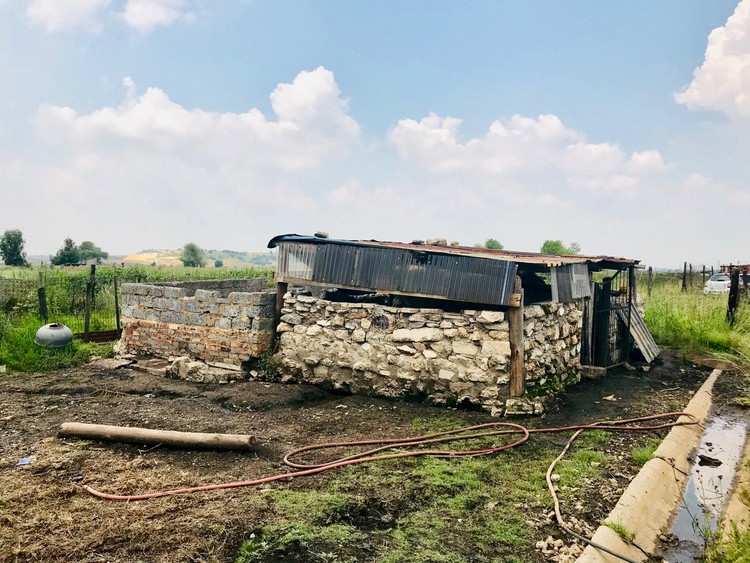 Vusumuzi Ngwenya also arrived after Skosana. He keeps over 200 animals – cattle, sheep, goats, pigs and geese – on his portion of the land. “l was forced to remove some of my animals because of the tensions around this land. Some of my goats were stolen and l had to ask a farmer in Balfour to keep them for me. But l will not leave, unless l am given another piece of land,” he says.

Ngwenya says he did ask Skosana for permission when he first came to occupy the land. “We are supposed to unite as farmers here at Vlakfontein and seek help from the department of agriculture. But how can we do that when we are fighting amongst each other? How can anyone fight to own land on a mine? That will never happen.”

“Zamas (informal miners) also come offering to pay so they can dig for gold around the land we occupy. We refuse, because we keep our animals here,” says Ngwenya.

As conflict simmers between the occupiers of the Vlakfontein land, Skosana hopes to get answers from government on whether he will receive the papers which he says he has been waiting for for over eight years. 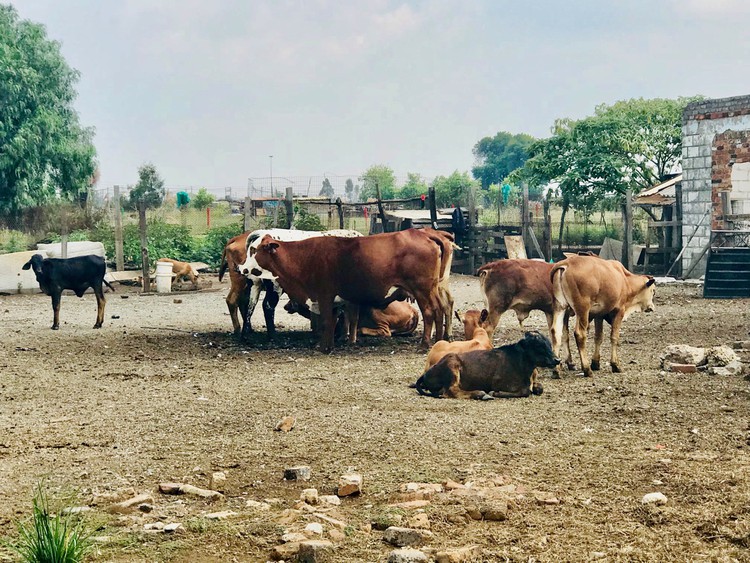 The cattle Vusumuzi Ngwenya keeps at the old Vlakfontein mine land.