“The gold is right here in the soil”

Located between Marievale military base and Nigel is an old gold mine, Vlakfontein, where informal miners extract gold from the mine dump.

“The gold found at this old mine is very easy to extract and in a good month one can make R10,000 or more,” explains Mozambican-born Ronaldo*. The 23-year-old has been mining gold at the old mine for more than six years.

“We do not even need to go underground to get the gold. It is right here in the soil we are standing on.”

He and his three brothers, aged 25, 24 and 20, used to live in one of the houses in the Happiness Village informal settlement, before they were evicted by the South African National Defence Force.

Three of them work on the mine dump with two of their friends while the oldest works at a brick manufacturing firm.

“I could not find work in a firm because they asked for a passport which l did not have at the time,” says Ronaldo. “One does not need a passport to extract gold.”

He now has a passport, but he still prefers to extract gold rather than work in a factory like his older brother, who he says is underpaid.

The miners separate the gold particles from the gravel using a handmade wooden drainage device with blankets and towels on it.

The towels absorb the gold particles while sand and stones are washed away.

The other tools used are a small metal plate, a hollow plastic dish and ten liter plastic buckets.

Vastinyo fetches soil from a heap with a rusty metal plate. He mixes the soil with water, then pours the mixture onto the wooden sieve to wash away dirt. Afterwards he carefully takes the towels off the sieve. His brother has a bucket full of water ready where the towels are rinsed, with the gold remaining inside the bucket. 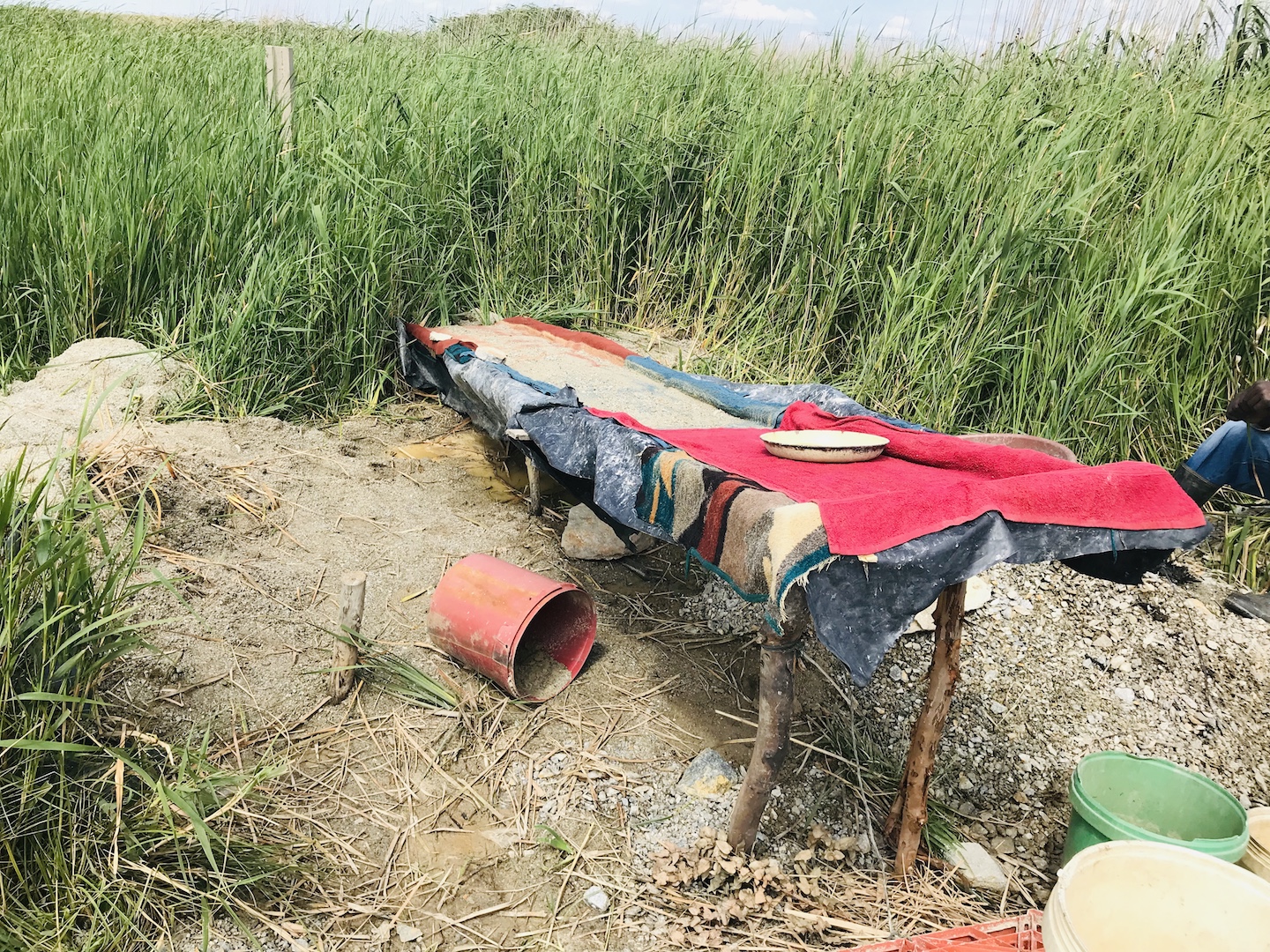 After a day’s work the men take the buckets home to a nearby informal settlement. Here they put mercury, which they buy in small bottles from muthi shops, into the mixture with washing powder, vinegar and tartaric acid. Eventually the water is drained out of the buckets, leaving the gold.

The miners do not smelt the gold themselves, their clients do, paying them R440 per gram. According to Ronaldo their clients are gold dealers from Nigel who come to fetch the gold. (The market price for gold is currently about R580 per gram.)

The brothers, who are from Nyembane village, Mozambique, left school after the death seven years ago of their father, who was the breadwinner in the family. They decided to come to Johannesburg and later fetched their friends from the village to come and mine gold with them.

Most of their savings are sent back home to their mother.

“Life at our village back in Nyembane is very poor. It is every child’s dream to come to South Africa in search of greener pastures,” says one of the brothers. 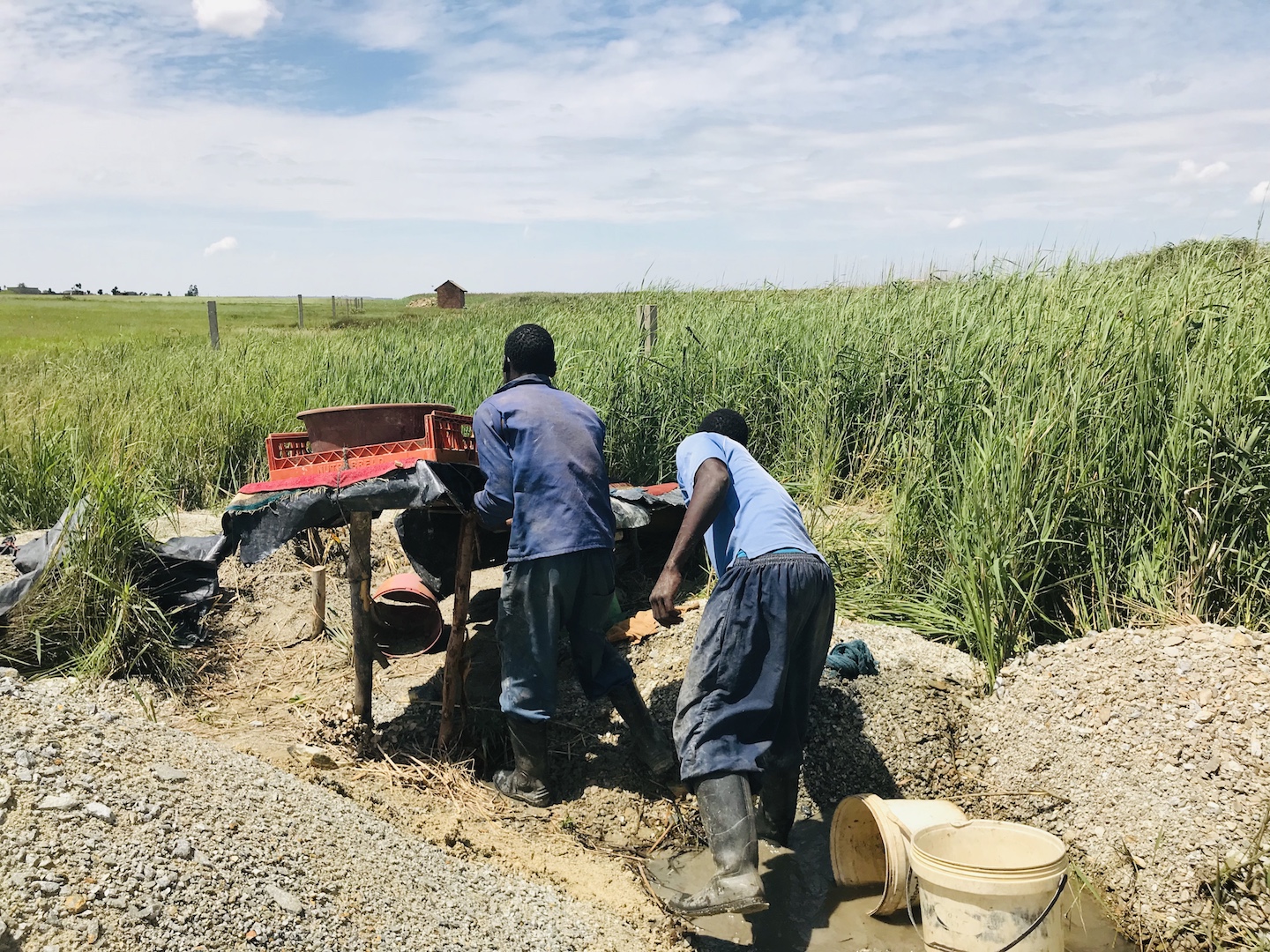 The brothers sell their gold to dealers who smelt the particles. Photo: Kimberley Mutandiro

Sometimes residents living near the mine scare away the young miners and steal their gold.

One brother hopes to go back to school and become a policeman. Another would like to study to be a teacher. Meanwhile, they dream of raising enough money to buy livestock, open shops, and move back home to Mozambique.

“We are not stealing from anyone,” says Ronaldo. “We are just earning a living.”

Next:  “I am living and working for the next meal”