Three-year-old Mtshidzi Ngwenya was killed at a pedestrian crossing on the N1 in Limpopo at 1pm. Pathologists only came after midnight 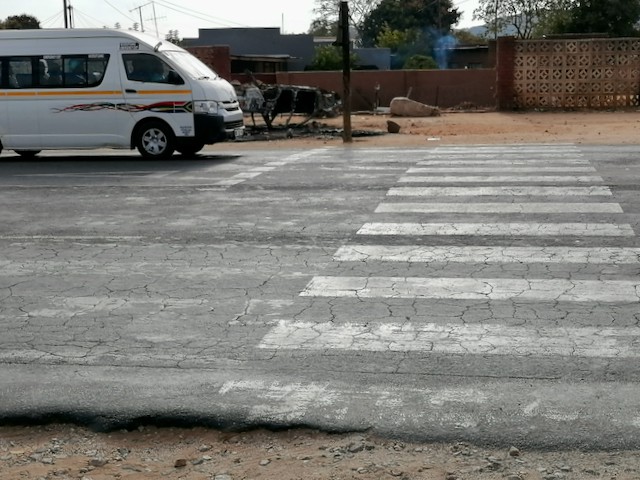 The scene where three-year-old Mtshidzi Ngwenya was killed in a hit and run accident. Photo: Bernard Chiguvare

On Saturday 31 July at around 1pm, a mother and her three-year-old child were struck in a hit-and-run accident on the N1 at a pedestrian crossing near Skoonplaas, Limpopo.

Mtshidzi Ngwenya died at the scene. The mother, Princess Muleya, was taken to Musina hospital. Police are investigating a case of culpable homicide.

Although the ambulance was quick to respond, the body of the infant lay out all day and evening and was only collected by pathologists just after midnight, according to Priscilla Muleya, the family spokesperson.

After the accident, the motorist fled the scene on foot but was later caught by the community and brought back to the scene of the accident. His vehicle was set alight.

“It was really inhumane to leave the body covered by plastic for nearly 12 hours. We tried to negotiate with police to cover the body with a blanket but were not allowed to do so by police,” said Muleya.

“We as a family were really tortured, seeing the body uncollected. We could not leave the body until it was collected the following morning,” said Muleya.

“This is really torturing the family of the deceased,” said Jacob Matakanye, director of the Messina Legal Advice Office. “We wonder why there is no pathologist service readily available in Musina.”

Matakanye said if the pathologist was slow to respond families might decide to collect the body on their own. This is against the law and they could face arrest for tampering with the body.

In a media statement, Limpopo MEC for transport Mavhungu Lerule-Ramakhanya cautioned drivers to look out for pedestrians and to reduce speed. She urged the public not to take the law into their own hands.

GroundUp has tried repeatedly for over a week to get comment from Neil Shikwambana, Limpopo Department of Health spokesperson, without success.

Next:  Some people haven’t received their disability grants since the start of the year