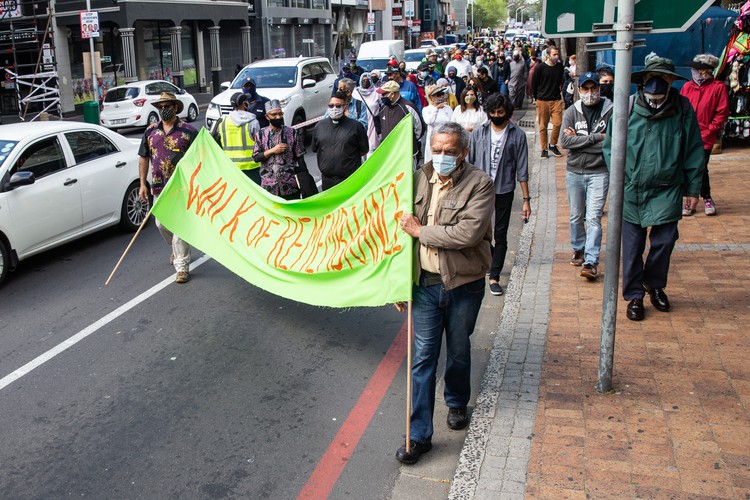 About 100 former residents of Claremont and Newlands held a 1.6 kilometre “walk of remembrance” from the Claremont to Newlands on Friday to commemorate Heritage Day. Photo: Ashraf Hendricks

About 100 former residents of Claremont and Newlands and their descendants embarked on a 1.6 kilometre “walk of remembrance” to commemorate Heritage Day on Friday. The group started at the St. Saviour’s Anglican Church in Claremont, stopped off at the Claremont Main Road Mosque, and ended their walk at the Kildare Road spring in Newlands.

Former residents gave speeches along the way recounting their memories of their community.

Following the Group Areas Act of 1950, most of Claremont and Newlands was designated as “white areas”. Black, Indian, and coloured tenants and property owners were evicted or forced to sell their properties. Lower Claremont (now Harfield Village) was declared a “white area” in 1969, and nearly 19,000 people were evicted from that suburb alone.

Cecil Lantegan was born in Claremont in 1936. He spoke fondly about how much Claremont had felt like a tight-knit community. “It was a happy place to be but unfortunately the Group Areas Act caused a lot of problems.”

Lantegan, who is 85-years-old, moved out of his home with his family when he was 21, prior to the forced removals. He said that a lot of focus is put on District 6, but families who lived in Claremont were equally affected.

Lantegan said, “Everyone has a story to tell, and everybody’s story will have a memory that you will relate to.”

Next:  Hundreds demand action against climate change outside Parliament