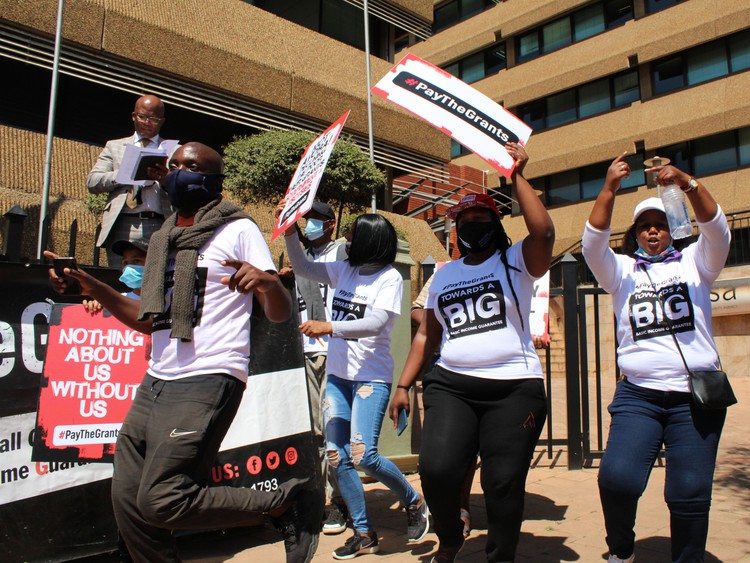 Activists with the #PayTheGrants picketed outside SASSA offices in Pretoria on Thursday. They are demanding that the agency fix flaws in the Covid-19 Social Relief of Distress grant application system. Photo: Masego Mafata

About 20 activists picketed outside the South African Social Security Agency (SASSA) offices in Pretoria on Thursday, demanding fixes to flaws that they have identified in the R350 Covid-19 Social Relief of Distress (SRD) grant application system.

Many of the activists, affiliated with the #PayTheGrants campaign, said they have been helping people in their communities who are struggling to apply for the SRD grant which was reinstated in July this year.

A memorandum handed over to SASSA and the Department of Social Development identified a number of “flaws” in the SRD system. These include the use of outdated data from the Unemployment Insurance Fund and the South African Revenue Service; caregivers who get the Child Support Grant not being able to access the SRD grant; and an appeals process that takes too long.

“These flaws are resulting in potentially millions of people being denied the grant. Though it is small, many people depend on it for food and other basic items,” said Israel Nkuna from #PayTheGrants.

According to SASSA spokesperson Paseka Letsatsi, they received about 13 million applications for the SRD grant since July, of which about eight million were approved.

When the SRD grant was reinstated, the eligibility criteria was expanded to include unemployed caregivers who receive the Child Support Grant (CSG) on behalf of children. According to the Black Sash, about 95% of CSG recipients are women who were previously excluded from receiving the R350 SRD grant.

Elizabeth Raiters said, “SASSA must fix their system. I live with my two sisters, who both receive the CSG for their children but they are unemployed. They applied for the R350 grant and their applications were declined. We appealed in August but we are still waiting to hear back from SASSA.”

Raiters said the grant would make a difference for her family because food prices have gone up and the CSG is not enough to support them.

According to Fanie Sethokga, general manager for operations at SASSA, there is some confusion amongst applicants who get the Child Support Grant. “As a recipient of the CSG, it doesn’t mean by default you automatically qualify for the SRD. Beneficiaries of the CSG must comply with the rest of the requirements to receive the SRD,” he said.

Sethokga said some of the confusion stems from the fact that recipients of the CSG are allowed to have other means of income, as long as it does not exceed the required threshold.

“You cannot apply for the SRD if you receive any form of income. We have had many child support beneficiaries who receive an income and are applying for the SRD,” he said. Sethokga said this was likely the reason why applications like the Raiters sisters were denied. He said the appeals process often took longer because they had to verify with all of the banks that the applicant does not have any active account receiving income. “But we try to respond within 60 days,” he said.

General Moyo from #PayTheGrants read out the memorandum before giving it to Letsatsi to sign. He also called for a Basic Income Guarantee of R1,500.

Letsatsi promised that the agency would respond to the campaign’s memo within seven days.

Previous:  Anti-vaxxers are making a false claim about the first vaccine dose. We debunk it