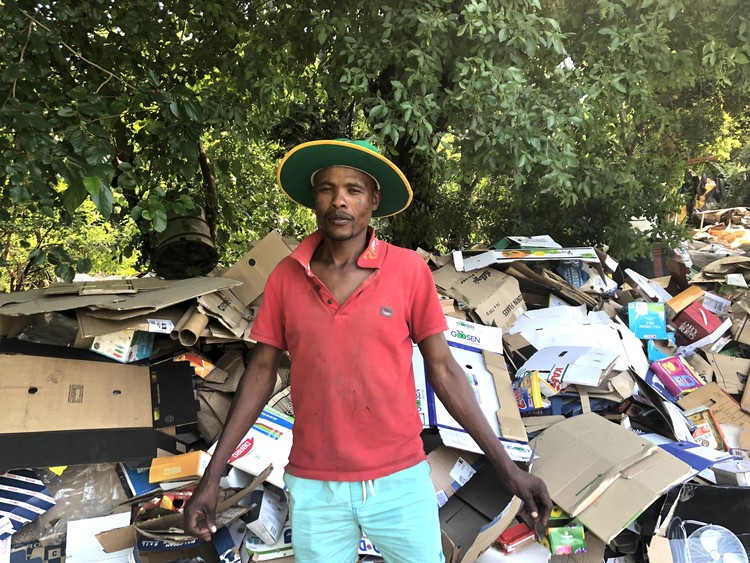 Thato Simbe says the recycling material he is storing to resell is worth about R14,000. He is among a group of about 200 people who face imminent eviction from a farm in Centurion. Their eviction is on hold until the City of Tshwane fully complies with the eviction order. Photos: Kimberly Mutandiro

Reclaimers living on the Lyttleton farm in Centurion can breathe a sigh of relief for now after members of Lawyers for Human Rights (LHR) intervened, halting their eviction on Monday.

About 200 people, most of whom make a living by selling recyclables, have been in a lengthy legal battle with the City of Tshwane over the informal settlement known as Mushroomville. Some of the occupiers say they have lived on the farm for a decade. Some are originally from Lesotho. The settlement is near the Hennops River and in danger of flooding.

In a ruling in June 2020, the Gauteng High Court criticised the way the occupiers and the Tshwane municipality conducted the eviction matter. The judge found in favour of the landowner, Turnover Trading, and ordered the eviction be done within 30 days.

The court also ordered the municipality to provide occupiers with emergency temporary accommodation at Sunderland Ridge, with water and toilets. The City also had to find out the immigration status of the residents and to help those who qualify apply for housing.

An eviction notice served on 9 November this year warned occupiers that they would be evicted on 15 November and be relocated about 15 kilometres away. It stated that they would also no longer be allowed to store their recyclables on the property.

This week, residents say they were shocked by how many metro officers and police came to evict them. Immigration officers from Home Affairs were also there to check on the status of residents

“They came with a big army of police to evict us. We need a bit more time to sell our stuff [recyclables] so our families can have money for the holidays,” said Sipho Mzisa, who has been living in Mushroomville for over five years.

“Every heap of recyclables counts. This job has saved us from starvation or indulging in crime. Talks of eviction give us sleepless nights,” said Msiza. He told GroundUp that he had recently collected material worth R4,000 in Hammanskraal about 40km away, which he fears losing when evicted.

Thato Simbe says the material he is storing to resell is worth R14,000. He is hoping to sell the recyclables in December so he can visit his wife and children in Lesotho.

“We are taken for granted because we are waste pickers. The work we do contributes to the economy and our families depend on it. If they move us, will they pay us all the money our material is worth?” asked Simbe.

Louise du Plessis, of LHR, said that while the eviction is inevitable, it was important to ensure that the City fully comply with the court order.

Chemical toilets and a 10,000-litre water tank have been installed at the relocation site, but the residents’ lawyers took issue with the City over the small size of the temporary units and the fact that some of them were still incomplete. They also demanded that the area be fenced. 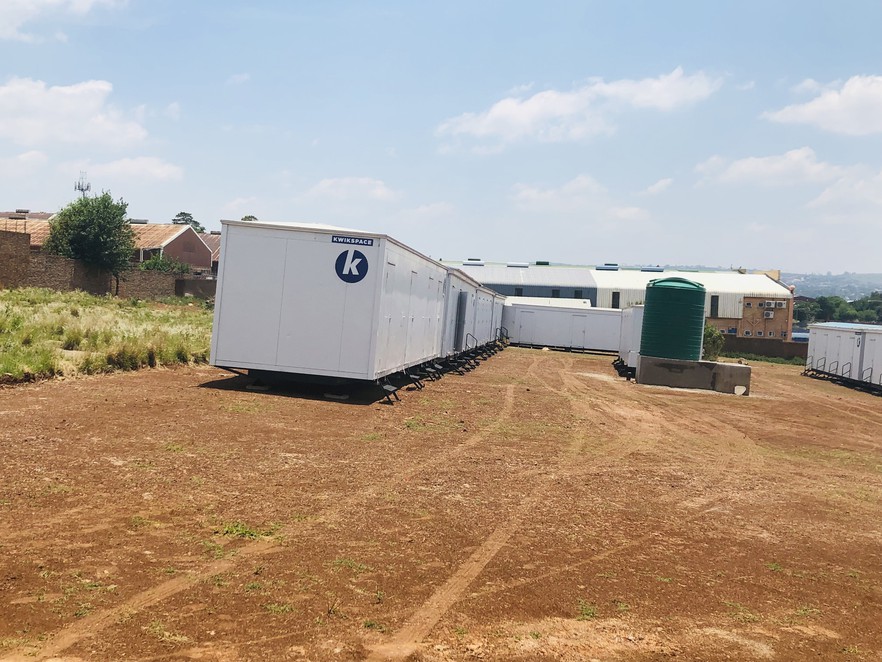 Emergency temporary accommodation at the site in Sunderland Ridge where the Tshwane municipality wants to relocate Mushroomville’s reclaimers and their families. The City was ordered to provide the occupiers with units, water and toilets.

“The least they could have done was to provide the 109 units specified by the court, so families have some form of dignity. They were also supposed to provide a security fence for access control.

“The land in Sunderland Ridge is set aside for a taxi rank and residents could be exposed to attacks by taxi owners. Only until everything has been prepared can the move be possible,” said Du Plessis.

Tshwane housing and human settlement divisional head Sello Chipu said the “long overdue” relocation of the Mushroomville occupiers is set to cost the City about R760,000.

When asked about the incomplete units at Sutherland Ridge, Chipu said the City only had 40 units ready and wanted people to share each unit. “The court order provided a list of 66 families but stated that we had to provide 109 units.

“We had intended to move at least the families previously stated in the court order but their lawyers are against that. The sheriff has said we cannot proceed until the 109 units have been provided. We are going back to see how best we can comply before proceeding with the eviction. The units are fit for the residents to share for six months until they can be integrated back into the community as the court stated,” he said.