City blames misuse of the system for the frequent blockages 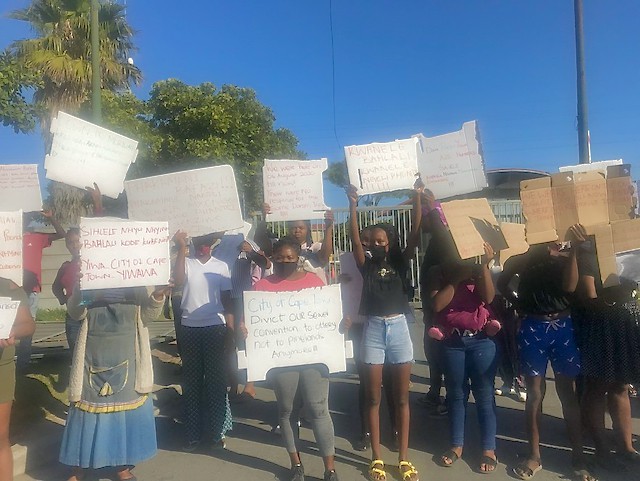 Dozens of Victoria Mxenge residents in Philippi protest outside the Fezeka subcouncil offices in Gugulethu. They want the City of Cape Town to first find a permanent solution to their ongoing sewerage issues before connecting the new houses to the same overburdened system. Photo: Tariro Washinyira

Residents of Victoria Mxenge in Philippi have brought a new housing project in the area to a halt. They are demanding that the City of Cape Town first find a permanent solution to ongoing sewerage issues in the area before connecting new houses to the same overburdened system.

For the past two years, misuse of the sewer system, made worse by cable theft and vandalism at the Philippi West Pump Station, has left the surrounding communities with frequent blockages and overflowing sewage.

In December, we reported on residents having to resort to building a bridge and makeshift pathway over the murky and foul smelling puddles of sewage outside their houses.

Residents say they have been pleading with the City to connect them to the pump stations in Hazendal or Gugulethu because of the countless incidents of vandalism and theft at the Philippi West site.

On Tuesday, about 60 residents protested outside the Fezeka subcouncil offices in Gugulethu. Community leaders then met City officials inside but were unhappy that the councillor and key staff responsible for sewers did not attend.

Community leader Patricia Matolengwe told GroundUp that the contractor and a subcouncil 14 representative met with them. “They told us we belong to subcouncil 13. We are done with the City. They don’t take us seriously. We have decided to disconnect the [housing projects] pipes and it is not our problem whether the pipes are stolen or not. It is their loss,” she said.

Resident Nosiphiwe Zimba said, “When we have problems, the City tells us that we are private landowners. My toilet is not working. The drain is a mess but the City wants to connect [more houses] to the same substandard drainage system.”

Buhle Jalisa said, “For more than two years we have been suffering from blocked drains at the same time we are fighting the Covid-19 pandemic. Several times we have complained to the City about sewage … If the City can’t give us proper service delivery they should leave us alone.”

In an email on Wednesday, the City confirmed that vandalism at pump stations and “dumping into sewers” are the causes of chronic overflow issues in the area.

Mayco Member for Water and Waste Xanthea Limberg said that removing pump stations completely as a way of avoiding vandalism was not possible because then sewage cannot flow to the treatment works.

Limberg said there is security and fencing but this did not deter vandals and criminals. “

The City continuously repairs damage from illegal activities and unblocks sewers of dumped material. One of the most common causes of sewer blockages in this area is rags or cloth which is flushed down the toilet.”