eThekwini flooded with sewage due to treatment plant failures 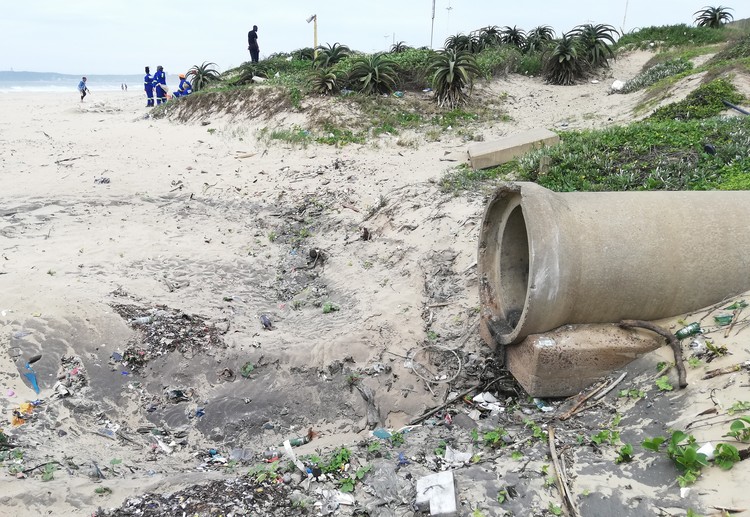 eThekwini municipality cleanup crews are attempting to tackle the massive amount of waste pouring out of effluent and drainage pipes that discharge into the ocean. The beaches in eThekwini have been opened and closed in short succession as the City battles to control E. coli levels. Photo: Benita Enoch

The decision by the eThekwini Municipality to re-open several beaches that had been closed due to ongoing high E. coli levels, has been called into question by water experts, the Democratic Alliance and Action SA.

Last week, municipal spokesperson Msawakhe Mayisela stated the decision to reopen the beaches in Durban was due to improved water quality standards.

“…Recent water tests conducted by experts confirmed that beach water is at an acceptable level for recreational activities,” stated Mayisela.

But this week ActionSA eThekwini caucus leader Alan Beesley said E. coli readings at the Country Club beach were more than double what is considered to be the “critical” E. coli level.

“The latest readings from Talbot, an independent laboratory taken on the 3rd November 2022 show that Country Club beach had an E. coli level of 1267 CFU/100ml. With the critical E-coli level being 500 CFU/100ml this beach should have been closed to beachgoers, yet it remains open,” stated Beesley.

“My advice to residents is to stay away from the beaches until independent tests can verify the claims of the city. Treat all information regarding this as unverified until independent scientists can provide unbiased reporting.”

Benoît Le Roy, a wastewater management expert with 40 years experience, and the CEO of the South African Water Chamber, told GroundUp there has long been a question over the competency of water sample collectors and the testing process.

In September, Daily Maverick reported discrepancies with the sewage pollution levels reported by the municipality.

Le Roy also questioned the qualifications of companies used to collect and test water samples, and said the public should have transparency on the matter.

“The entire chain of custody needs to be carried out by independent accredited persons,” he said.

Data from the Department of Water and Sanitation’s Integrated Regulated Information System (IRIS) reveals that of the 14 municipalities in KwaZulu-Natal, 10 of them (71%) regularly fail to comply with minimum wastewater treatment standards. The Department of Water and Sanitation (DWS) system rates them as “bad” (achieving compliance less than 50% of the time) or “poor” (complying with minimum effluent standards between 50% and 70% of the time). This untreated and partially treated sewage is released directly into KwaZulu-Natal’s rivers, and in some cases, directly into the ocean.

According to the DWS system, in eThekwini, 75% of the 27 sewage treatment plants it operates are failing to treat effluent to minimum standards. They have the capacity to release 761 million litres of untreated or partially treated sewage into the rivers and ocean, per day.

The DWS system shows two sewage treatment works, Central and Southern, together have the capacity to release 461 million litres of effluent directly into the ocean per day. Both of them have a 0% compliance for microbiological treatment, which is the indicator for E. coli and other faecal bacteria.

These figures should alarm public health officials who should be holding the respective departments accountable and finding immediate solutions for rehabilitation, said Le Roy.

Nationally, billions of litres of untreated and partially treated sewage are released into the environment daily. “This is not discussed by government, to my knowledge, as it would be seen as a clear admission of guilt, which it would be,” he said.

With untreated and partially treated sewage flowing via the river into which it is released, into dams from which drinking water is extracted, Le Roy said there was a very real threat of unsuitable drinking water finding its way into piped water.

In August, 38-year-old Rashnie Baijnath died after having severe diarrhoea, thought to be caused by drinking contaminated water from a tap in Mariannhill. The eThekwini municipality told Daily Maverick that the water did not “meet acceptable standards for human consumption”. It once again asked residents to boil water for a minute before consuming or cooking.

E. coli can also be ingested through respiratory entrances. Gastrointestinal complications like nausea, diarrhoea and vomiting may arise.

“Zero South African water treatment plants, except for Ballito (north of Durban) and Beaufort West (in the Western Cape), are designed to treat partially treated sewage. So, the very real possibility of poisoning the population via potable water distribution networks (like taps) is a real threat that is not receiving the required utmost urgency,” said Le Roy.

eThekwini Municipality acknowledged the sewage problem at a media briefing late last month, when Mayor Mxolisi Kaunda said R460-million would be needed to fix both the water treatment plants and pump stations. And on 27 October, the municipality released a video outlining some of the challenges its sanitation infrastructure suffered during the April floods.

But University of the Free State Centre for Environmental Management Professor Anthony Turton said the floods could not be solely blamed as a lack of maintenance and of skilled technicians over time has allowed sewage treatment plants to deteriorate.

This is confirmed by historical data on the DWS system, which shows that during 2021, eThekwini sewage treatment works had an overall compliance rate of 54.5% for microbiological indicators and 68.5% for chemical compliance, which relates to the presence of nitrates and phosphates in the treated effluent. The DWS rates both these compliance levels as “poor”.

DWS did not respond to questions asking for clarity on E. coli levels in KZN and to quantify the threat to public health.

Methodology for calculating the volume of untreated sewage in eThekwini:

Next:  About 300 Durban climate activists picket against oil and gas exploration

Previous:  Gqeberha is losing the war on dumping