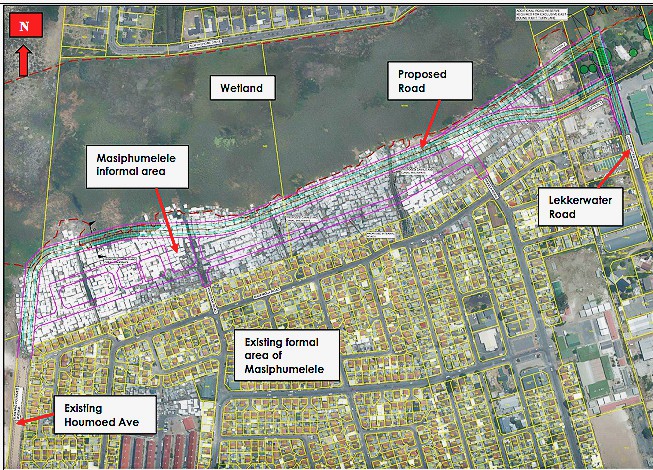 A locality map showing the formal and informal housing areas and the wetlands at Masiphumelele.

Approval of a new road in Masiphumelele to physically separate this densely packed settlement from the Noordhoek wetlands and allow major upgrading of homes has been provisionally stalled by an appeal.

The appeal was filed by the Noordhoek Environmental Action Group (NEAG), a long-established green community group in the “Deep South” area of the Peninsula.

This is the second part of a two-part article. Read part one: Masiphumelele upgrade plan approved but Noordhoek group’s appeal still pending.

NEAG is neither opposed to the construction of the proposed new road (Houmoed Avenue Extension: Phase 2) nor to the planned upgrading and/or relocation of some 2,500 Masiphumelele households that are linked to the road upgrade, although it has some concerns about stormwater management.

Rather, it argues that environmental authorisation for this project, issued earlier this year by the provincial authorities, was based on a fundamentally flawed, and hence invalid, environmental impact assessment (EIA) process.

It raised similar concerns in an appeal earlier this year against the province’s approval of the first phase of Houmoed Avenue Extension, that involves upgrading a section of road to the north of Masiphumelele.

The environmental impact assessment for both projects was managed for the City of Cape Town by environmental practitioner Sadia Chand of Chand Environmental Consultants.

Chand is also a director of road construction company Martin & East that has done substantial work for the City in the Deep South area. This, NEAG alleges, means there is “a reasonable apprehension of bias” on the part of Chand. It argues that Chand might not be fully independent, as legally required, and further alleges that she also failed to declare this potential conflict of interest.

After NEAG’s appeal for the Phase 1 project was reported in GroundUp, the provincial environment department invited Chand to respond.

In her response, Chand insisted there was no conflict of interest or bias on her part, that she was fully independent and that she was not in a position to influence any contracts that Martin & East might secure in the future. “I remained objective at all times and did not present any false or misleading information which could lead to a question of my independence,” she wrote.

This first appeal has not yet been adjudicated by provincial environment MEC Anton Bredell.

NEAG’s appeal for Phase 2 repeats its allegation of “a reasonable apprehension of bias”, and again asserts that Chand failed to declare the existence of a potential conflict of interests to interested and affected parties or to the authorities “as required by the relevant rules”.

“We are advised that this breach [of the relevant rules] is serious enough to vitiate the entire process.”

This time, Chand has responded even more vigorously, sending a five-page statement to the provincial authorities together with a legal opinion from environmental law specialist Cormac Cullinan and a 12-page letter from attorneys Mathew Walton & Associates on behalf of Martin & East.

The City of Cape Town also submitted a 13-page statement to the province that fully supports Chand and rejects NEAG’s arguments.

In her responding statement, Chand says NEAG’s allegations are “completely without merit” and have the potential for damaging her reputation and that of her firm.

At present, Martin & East was not involved in the Houmoed Avenue Extension: Phase 2 project and this was not yet out to tender, Chand pointed out.

She said she was not a shareholder in the construction company, was not remunerated on the basis of projects that it successfully tendered for, and her remuneration would not be affected by whether the company won any tenders or not. She also had “no capacity to influence the awarding of tenders by the City”.

“In my view the allegations of conflict of interest, lack of independence and bias made against me are no more than an ad hominem attack made by an Appellant [NEAG] in an attempt to bolster its appeal. They are based on an incorrect understanding of the law and speculation that verges on the paranoid and are without merit,” Chand concluded.

In his letter, Walton accuses NEAG of making an “inflammatory allegation” of possible bribery and corruption against his client.

“Not even the tiniest shred of evidence is supplied for this monstrous suggestion … NEAG’s appeal does not provide any such evidence because none exists, because neither Chand nor Martin & East is corrupt.”

In his opinion, Cullinan said “most” of the legal conclusions in NEAG’s appeal document were incorrect, including on the issue of the alleged conflict of interest.

NEAG chairperson Dr Andrea Marais told GroundUp they did not agree with much of Chand’s responding statement.

“We will elaborate on our concerns regarding the independence of the EAP at a later stage if necessary. For the time being, we need to draw the attention of the decision-maker [Bredell] to the most urgent problem with the submission, in order to avoid unnecessary legal costs for all parties in future.”

The two sets of appeals will be adjudicated by Bredell, but he will not make a decision simultaneously.

“The appeals were submitted at different time-frames and thus the Houmoed [Avenue Extension] Phase 1 will be decided before the Phase 2,” the department’s Head of Communication Rudolf van Jaarsveldt said. “Unfortunately due to Covid-19, there are delays in the process and this makes it impossible to clearly define when a decision will be made.”

Previous:  Families face eviction from one of Gauteng’s iconic buildings