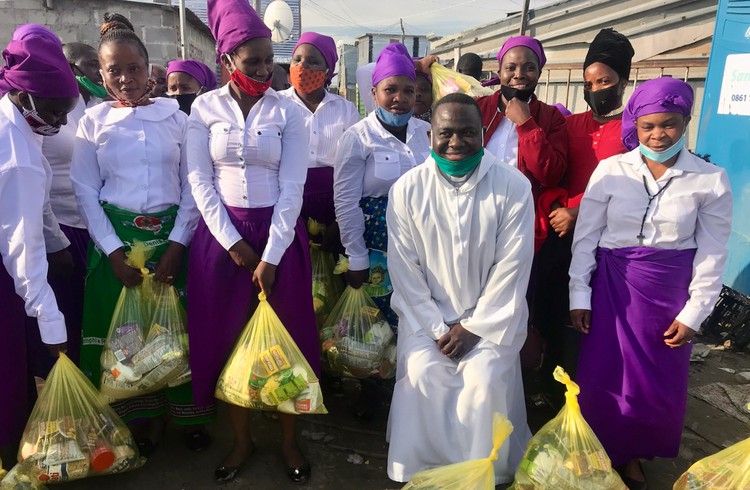 “They came [to South Africa] so that they can have a better life and send money home, but [instead] they are asking to be sent money from home. It should be the other way round,” said Father Kizito Gugah of St Timothy’s Catholic Church in Tafelsig, Mitchells Plain.

Father Kizito spends a lot of time on the road these days, distributing food parcels.

“One day during the lockdown a priest friend couldn’t get hold of me on the phone because I was busy distributing food parcels in an informal settlement. He was touched and made a donation of R1,000. He then spread the word to his friends who also donated. The archdiocese also released donations. We bought food items and distributed to the most needy. That’s how the project started,” he explained.

Father Kizito says there was already hunger in the Malawian community before the Covid-19 pandemic, but it has only become worse, with many having lost their jobs. Donations are also beginning to dry up now.

“They are vulnerable, undocumented and paid too little for informal jobs they do. In townships the ward councillors give food parcels to South African citizens only.”

“Some told me they wanted to go home but did not have money for transport,” he said.

Community leader and small business owner Charles Katsoka said: “Four women I spoke to requested help in the form of bus tickets to go to Malawi. They said they do not want money.”

He said many people were evicted from their shacks during lockdown because they could not pay rent.

We joined Father Kizito at a food parcel distribution in Dunoon last week. An undocumented man whose sister was among the lucky ones to get a food parcel, said he came to South Africa three years ago. He has been working for a gardening service company in Tableview. He rents a shack in Dunoon for R900 per month.

“I miss my children and wife. I intended to visit them in December but because of the Covid-19 pandemic I am making too little money. I would rather send a few rands for their upkeep,” he said.

“The government sent buses from private companies in the provinces to Johannesburg, Cape Town and Durban and asked the struggling citizens to pay double the fare. So no one took up the offer,” said Father Kizito.

“I drive for long and at night to different parts of the Western Cape to distribute food parcels to ensure that the food gets to the right person. These include Hermanus, Masiphumelele, Imizamo Yethu, Capricorn, Dunoon and Samora Machel,” said Father Kizito.

The Malawi Consul General in Johannesburg has not replied to our questions.

Next:  Covid-19: How a Cape Town project saved many lives