“Governments worldwide have taken extraordinary measures. By contrast, the response from the South African government has been relatively limited”

The South African government should massively ramp up its “insufficient” spending to cushion the country from the economic and social ravages of the Covid-19 lockdown and the pandemic, says the Institute for Economic Justice (IEJ) in a policy document.

The think tank has released a detailed emergency rescue package which it says the state should move in line in-with other countries.

The IEJ says the current rescue package of R41 billion is “clearly insufficient” and suggests an initial injection of at least R310 billion just to “partially offset the initial shock”, and another R100 billion to facilitate tax and payment deferrals.

And then, additional spending will be required to target high-multiplier economic activity, the IEJ says. (Here is a description of the multiplier effect.)

Graphical summary of the IEJ document

The IEJ says governments worldwide have taken “extraordinary measures” - the government of the United Kingdom is spending 19.3% of its GDP - while South Africa’s response has been “relatively limited”, committing less than one percent, despite numerous viable proposals put forward.

The IEJ’s policy brief builds on proposals made by over 160 economists and policy experts and suggests a raft of interventions to cushion the hardship and economic risks.

“There is a significant risk that millions in poverty will fall into destitution; millions more, currently in work, will be driven into poverty and become unable to meet their basic needs; and thousands of businesses will be forced to close due to falling demand as a result of the lockdown, falling incomes and a contraction of economic activity.”

The IEJ says self-employed, atypically employed, informal workers, and small businesses, are particularly vulnerable, but no-one will be exempt from the effects of the crisis.

Traditional social support networks will be disrupted and the long- term impact on business capacity, and physical, financial, and human capital, “could be devastating to our already ailing economy”.

In any already deeply unequal society, the hardship “will fall hardest on black people, and especially black women and children”. 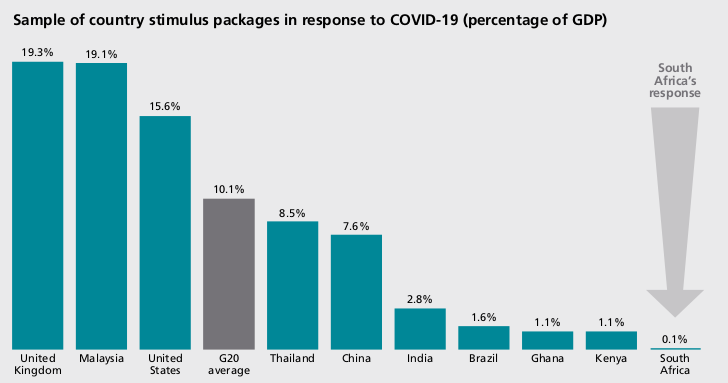 With regard to social grants, “the easiest means of providing support”, the IEJ proposes the payment of a Universal Basic Income Grant of R4,500 to every adult in May without a means test. If 85% of adults claim the money this will cost R150 billion.

The document proposes that all social grants should increase by R500 for three months with an emergency mid-month R500 paid in April to all (R36.7 billion).

It proposes an extension of the child support grant to an estimated 670,000 pregnant women (R1.9 billion) and an automatic renewal of disability grants (no extra cost).

It also proposes that R4.5 billion be spent on two million food parcels a month for three months.

The IEJ says R20 billion should be set aside for personal protective equipment (masks, gloves etc), tracing of contacts of Covid-positive people, testing and quarantine facilities and suggests that consideration must be given in the short term, to “nationalising” beds at private hospitals at cost.

The Unemployment Insurance Fund (UIF) should ensure it is able to pay out an additional R18.4 billion in claims, as needs are likely to outstrip the R30 billion available through the Temporary Employee/Employer Relief scheme. The IEJ proposes that the present sliding scale should be amended so that 80% of wages can be claimed for low earners. “The stringent criteria limiting it to businesses closed as a direct result of the virus needs to be relaxed. It is inappropropriate given the dynamic economy [and] wide nature of the economic collapse.”

It proposes tax deferments as opposed to tax relief and says consideration must be given to imposing a solidarity tax on those with high incomes.

Business support efforts should include expanded credit facilities and funding through grants and incentives. 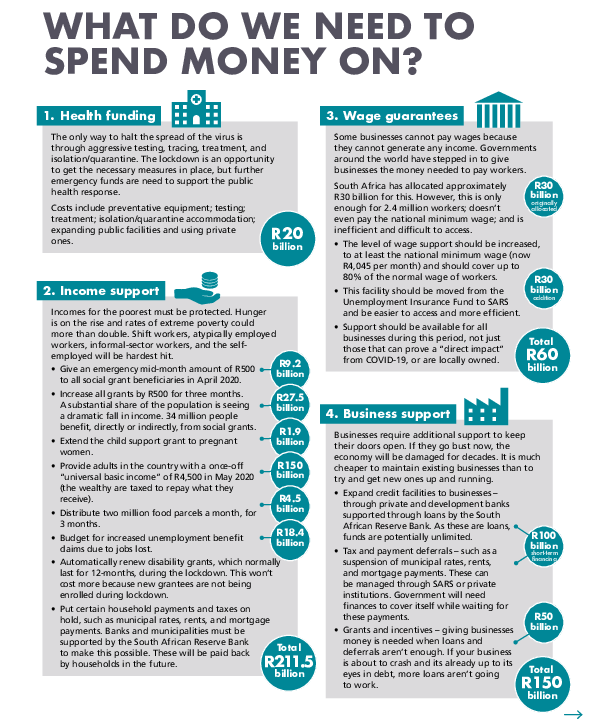 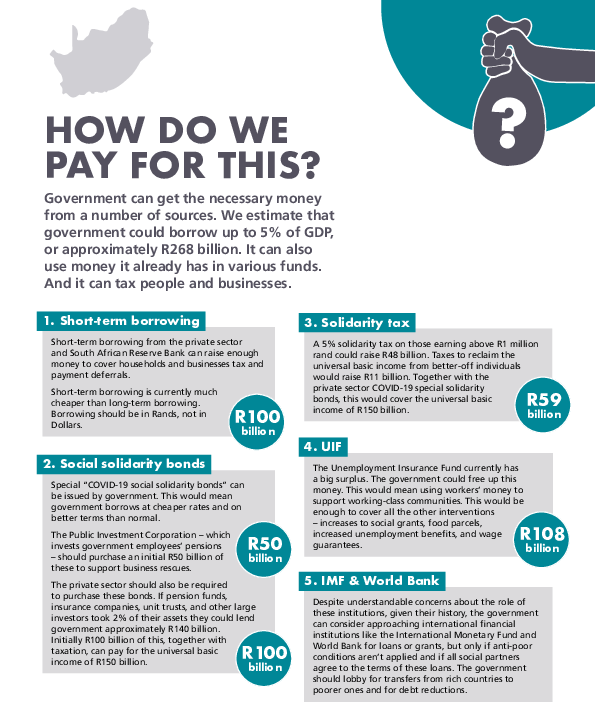 Next:  Robertson farmer takes activists to court over eviction email