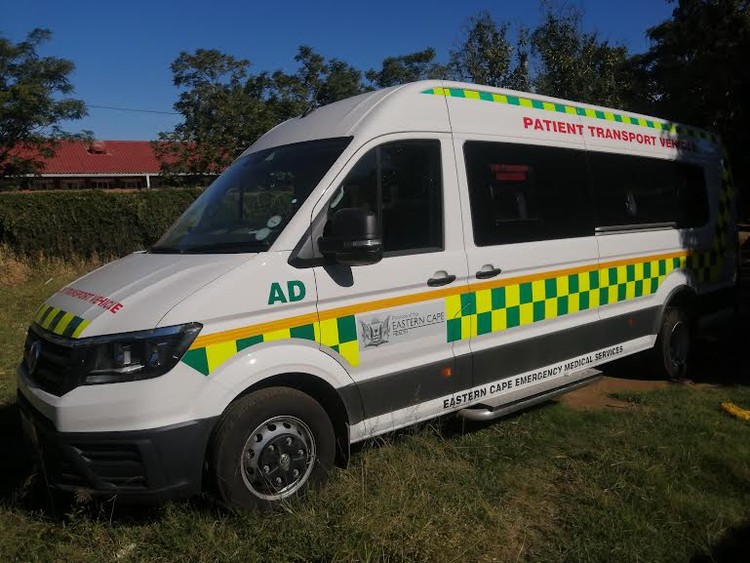 For three weeks the vehicle which transports patients from Monday to Thursday in Fort Beaufort to East London has been grounded at Fort Beaufort Provincial Hospital due to a paramedics strike. Photo: Mkhuseli Sizani

The Eastern Cape Department of Health has served more than 200 paramedics with letters of intention to dismiss them for embarking on a strike.

Long-standing problems with access to ambulances in parts of the Eastern Cape have worsened over the last three weeks as paramedics have stopped work in Buffalo City Municipality, Amahlathi and Raymond Mhlaba Local Municipality. The paramedics are demanding fully equipped ambulances, with valid licence discs, and cellphones.

The workers are members of the National Education, Health and Allied Workers’ Union (NEHAWU) which maintains that the paramedics are not on strike but are exercising their right to safety at work. The paramedics come to work everyday in full uniform and wait at their work places until their shifts are over.

One of the workers, who has been a paramedic for six years, told GroundUp: “The service we offer to the public is very poor. Our ambulances have no equipment. There are no machines to check diabetes and high blood pressure. Our radios don’t function because we work in deep rural areas where there is a network problem. We use our cellphones to respond to the calls and communicate with our control room.”

“These issues have been raised for many years with the department but it has always been empty promises. If we transport a patient in an ambulance which is not fully equipped the department shifts the blame on us if something wrong happens to the patient. We are not on strike, because we come daily to work.”

“The Department is threatening to fire us but it’s fully aware that it is failing its workers and patients.”

Thando Ntsume from Hillside dropped a patient in casualty with his private vehicle. “I could see that she was in severe pain and battling to breathe. Her family had been calling for an ambulance since the morning but it never arrived.”

“I know from my own experience that there are no ambulances available in this hospital. Three months ago I was stabbed and admitted to this hospital. Doctors transferred me to Cecilia Makiwane Hospital but they told me I should find my own transport because ambulances are not available. My brother had to take me with his car to East London.” 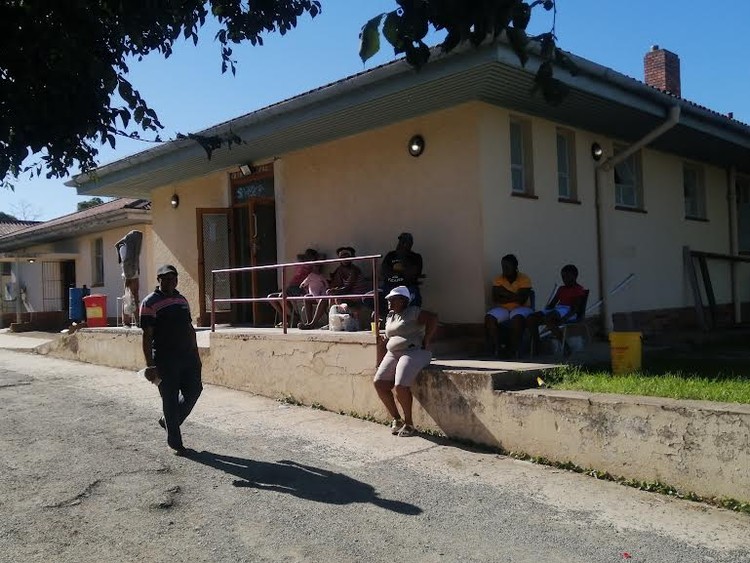 Mihlali Matshoba says the ambulance crisis has been going on for a long time. “On 7 October I gave birth at home because ambulances are not available here in Fort Beaufort. Sometimes they are hours late or we are told there is only one ambulance operating.”

Nolly Oliphant had to borrow money to put fuel in her car to take her son to Cecilia Makiwane Hospital after he injured his hand.

“I drove with him to Fort Beaufort Provincial Hospital. The doctors treated him and told me that I should take him with my own transport to Cecilia Makiwane Hospital. “I had to borrow R1,200 for fuel because ambulances are not available.”

“The strike has been devastating,” said one of the Fort Beaufort doctors. “We had to ventilate a patient in Fort Beaufort for over 24 hours because of the strike. Eventually we managed to get a private ambulance to come. The hospitals have been using their bakkies to transport patients.”

Regional NEHAWU coordinator Mzamane Mgwantashe says the workers are not on strike. “Over 200 workers are coming everyday to work. But they cannot perform their duties because ambulances are faulty and not fully equipped. In February, ambulances were fully equipped by the Department in order to obtain service compliance certificates. The same day after the assessment was done the equipment was stripped by the Department. We don’t know why that was done and we don’t know where that equipment was taken.”

He said workers had been told cellphones had been bought for them, but they had never received them. “Instead the Department bought ‘push-to-talk’ devices without consulting the workers.”

Mkhululi Ndamase, spokesperson for Health MEC Nomakhosazana Meth, confirmed the notices to dismiss over 200 workers who had embarked on an unprotected strike. He said the department had addressed the issues raised by the union.

“All vehicles are licensed annually and a certificate of fitness is issued before a vehicle is put on the road. We are in agreement that if a vehicle does not carry the valid licence and/or the certificate of fitness displayed, it should not be used. There are more than enough vehicles in the pool even while vehicles may be grounded whilst being repaired. The rough terrain of our predominantly rural areas and high volume usage does make them vulnerable to breakdowns.”

On the issue of cellphones, he said the department had issued “push-to-talk devices” earlier this year and most paramedics had accepted them. Responding to the complaint about equipment being put in the ambulances just to get licence approval, Ndamase said this was being investigated.

“None of these issues are considered valid reasons to suspend services to the communities we serve.”

The department was using private ambulances to respond to emergency calls, which was costly. Two of these ambulances had been stoned, he said.

Ndamase said a rule of no work no pay would apply.

Next:  Gauteng health crisis: We interview the MEC for Health