15 years after two men drowned, Fort Beaufort families are still waiting for a safe bridge over the Kat River

Parents keep children home from school when it rains 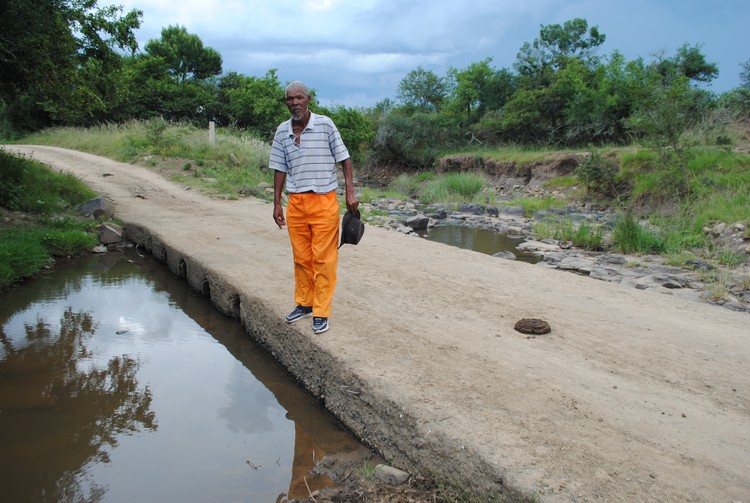 James Daries at the river where his uncle drowned in 2007 after being swept off the causeway. He says the municipality promised a safer bridge but nothing has happened. Photo: Mkhuseli Sizani

Fort Beaufort residents are still waiting for a safe bridge over the Kat River, more than 15 years after two friends drowned trying to cross the causeway. When it rains, parents keep children at home rather than letting them risk crossing the bridge on the way to school.

Manitjie Daries and Ronnie Arendse were swept away by the water while trying to cross a causeway over the river in Seymour, in Fort Beaufort, in 2007. nephew, James Daries, Manitjie’s nephew, says the municipality promised a safe bridge after the tragedy.

“It was raining and they were coming from a shop across the river. They crossed at the low lying bridge, but the water was too strong. Their bodies were recovered after three days by the community after divers from East London failed to recover their bodies.”

“The municipality assisted us with the burials and also gave us zincs to fix our mud houses. It promised us that it would build a proper bridge for us. But until today the bridge has not been built,” said Daries.

In response to GroundUp’s queries, the Raymond Mhlaba Local Municipality and the Eastern Cape Department of Transport and Roads shifted the responsibility for the bridges and maintenance of the roads to each another.

All roads and bridges In Seymour are in a terrible state. Villagers say everything comes into a standstill in the rain.

Daries said “If it rains before the children go to school many parents keep them home. Sometimes if it rains while the learners are at school, the residents on the other side of the river keep them in their homes until the water sinks.”

Monwabisi Mbekana said emergency services do not come to the village when the rain is hard. “The ambulance and police don’t come here when the river is full. If someone is very sick we use donkey carts to cross over that bridge.”

Lucky Nkantini drives scholar transport to Jeanet Mahonga Primary School in Seymour. He said the roads were very poor. “On wet days we don’t drive because roads are muddy and this low lying bridge gets full of water.

“I spend a lot of money doing repairs every month because our gravel roads are not maintained.”

Bejile Mahashe, deputy principal at Jeanet Mahonga Primary School, which has about 500 learners, said, “On rainy days we have to stop teaching in fear that the river might get full and learners be unable to get back home. Sometimes they don’t come to school until the water levels drop. This problem has been reported for many years because it affects all the schools. We are always promised that the bridge will be built.”

Nowandisile Mrwetyana told GroundUp, “Taxis and ambulances do not want to ferry us from our village because our roads are badly damaged. They have not been maintained for many years. In February my daughter was in labour, I had to hire a private car for R50 to drop her on the R67 and wait for an ambulance there. Some of us walk about two kiloometres from home to the R67. Sometimes we are carrying our groceries.”

Sivenkosi Mtiya, municipal spokesperson, said the municipality was aware of the drowning incident but referred all GroundUp’s questions to the provincial Department of Roads and Transport.

Unathi Binqose, spokesperson for the provincial department of Roads and Transport, said, “We have not been made aware of the situation. Part of the reason is that the complaint might have gone to the municipality. The municipalities do have a budget for Infrastructure such as roads and bridges.”