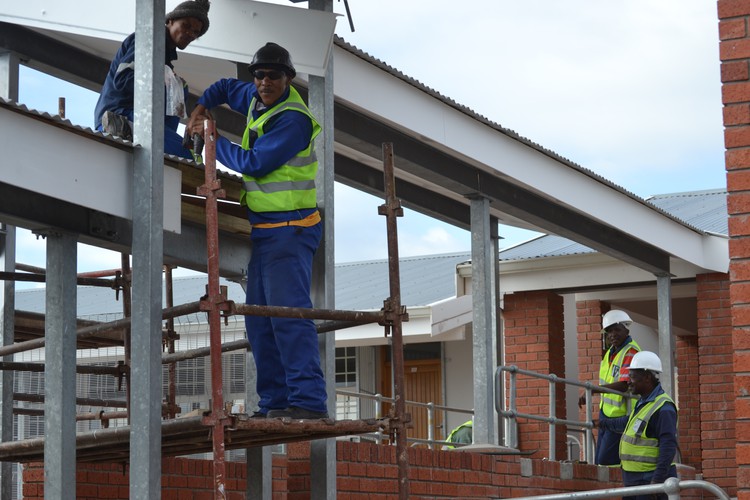 Contractors have resumed work at Jubilee Park Primary in Kariega this week after the Eastern Cape education department paid the company outstanding fees of R8 million to complete the renovations at the school. Photo: Thamsanqa Mbovane

Construction at Jubilee Park Primary School in Gerald Smith, Kariega is underway after being stalled for nearly three years because the provincial Department of Education had not paid contractors.

A R77-million project to rebuild the school halted in 2018. The construction company, Transtruct, says the department owes it R8 million to renovate 14 existing blocks and build 21 new classes at the school.

Last month, we reported that parents protested, demanding that the school building be completed. The school’s 2,000 learners have been using prefabricated classrooms while teachers and other staff sat under a tree on the school grounds. The school is surrounded by overgrown shrubbery and piles of unused construction material.

On Wednesday, department spokesperson, Malibongwe Mtima, told GroundUp that the outstanding bill had been paid. “The MEC for Education Fundile Gade also met the leadership of Jubilee Park Primary last Friday when he was in Kariega,” he said.

Chairperson at Jubilee Park Primary, Lucky-Girl Tiyo, said that frustrated parents kept their children at home for the last three weeks. She said learners were only able to attend school one day per week.

“The main contractor has also promised us they will finish at least 17 classrooms in the first week of June. They said the whole school could be completed by the end of November,” she said.

Previous:  5,000 Siqalo households have no water during the day