5,000 Siqalo households have no water during the day 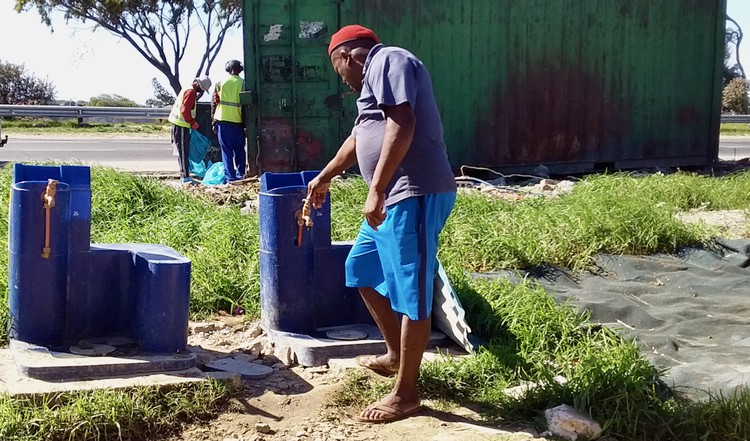 Community leader Ndimphiwe Diza said there is no water to be had from 5am until 8pm. Residents rush to the taps at night when the water returns.

Mayco Member for Water and Waste Alderman Xanthea Limberg said the City had investigated the reports and found that illegal connections to the 50mm water pipeline were causing a pressure drop. The City is in the process of replacing the supply line with a new one, but warns that illegal connectinos to the new line will cause similar problems. It also plans to hold a workshop to explain to the community the effects of illegal tie-ins to the water supply.

Diza said the 15 standpipes are installed along the road, too far away from the shacks. “Those who live at the back are very far from the taps,” said Diza.

One of these residents, Kholeka Baba, said, “I walk close to one kilometre to the tap, and now that during the day we don’t get water, I struggle. Sometimes I have to hire boys to accompany me to the tap or pay them to fetch water for me.” She said fetching water can be dangerous because “some of the shacks are used by criminals”.

Mayco Member for Human Settlements Councillor Malusi Booi said the City had acted out of humanitarian concerns to provide services on the periphery of the land. He said Siqalo is located on private land and the City can’t install services.

The national Department of Human Settlements is looking at options for the future of the settlement.

Diza said, “We have been living on this land for close to ten years now and we are voters but we lack service delivery. For years we have been protesting … This place has no electricity. We are using illegal connections. Some are using candles, which often cause fires, and with this struggle for water it is not easy to fight fire.”