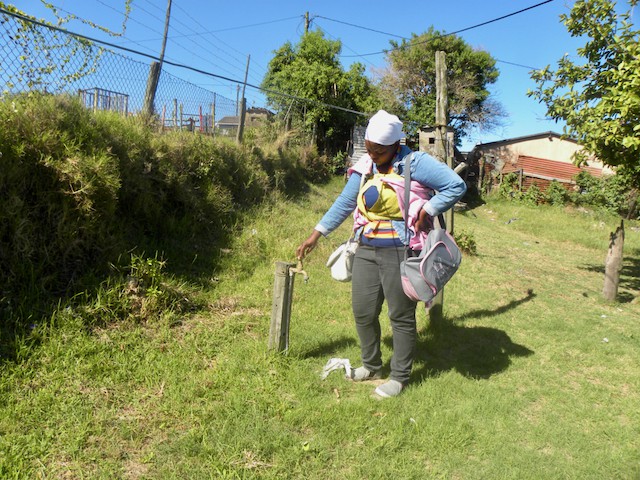 Thabisa Ngezi, who lives in Nemato township, says the water situation in Port Alfred is worsening by the day.

“There are times when water tankers arrive late. They often bring insufficient water. Tankers quickly empty, because there are many people depending on them,” says Ngezi.

“We don’t have money to buy water from shops. There is always chaos as people scramble to get water. There is no social distancing and people don’t care about contracting Covid-19 in those queues. What they want is water for their families.”

The local economy is dominated by farming and tourism, both heavily affected.

The municipality blames the crisis on the drought. Municipal manager Rolly Dumezweni says, “The drought situation has come a long way since 2018 … This drought has caused dam levels to drop drastically especially when rainfall is not available.”

“The Port Alfred community is serviced with bulk water from the Sarel Hayward dam, the East Bank dune wellfields, and the Central belt boreholes. These water sources are designed to traditionally produce a combined yield of 6.6 million litres per day, yet the current water demand is 8.2 million litres per day.”

“The Reverse Osmosis plant is currently under the construction stage and will yield five million litres per day when in operation.”

In a recent pamphlet, the municipality said the plant was expected to produce towards the end of March.

Water tanks have been placed at strategic places in Port Alfred town and townships and water tankers are hired to fill those tanks. They fill up at Boknes and Cannon Rocks, which is why they arrive late at the townships.

Dumezweni said a pipeline is also underway to take water from boreholes to Mansfield pump station to pump it to the Bathurst Water Treatment Works and Port Alfred.

Next:  Butterworth residents promised houses in 2008 won’t see them any time soon